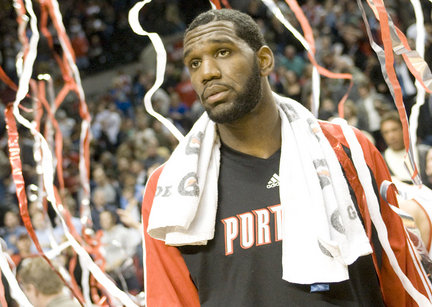 I wasn't planning to write another post about injuries this week, but I was talking with a friend of mine about Chris Paul and a thought came into my head that I didn't want to sit on. One of Chris Paul's most notable traits (unfortunately) is his somewhat sketchy injury history. While he only missed 2 games last season for a scary-but-minor concussion, thinking about all the dings and dents of an NBA season and the possible repercussions on Paul got me to thinking about how those will look this year. To start -- the season is compressed, and every game mathematically matters more. Andrew Bynum was suspended five games for his hit on J.J. Barea in last year's playoffs. In a full season, that's 6.0% of a player's possible games. In a compressed season? 7.5%. Not an insignificant difference, by any means. The effect of individual games being worth more in the overall picture is pretty straightforward. But as for that being the only effect? Not quite.

That's only true for suspensions, which are a designated number of games. What about injuries? When a player gets a hip strain or a sprained ankle, they aren't out some prescribed number of games. It isn't like the NFL, where a concussion means a designated number of games out of action. An injury to a basketball player simply means you're out until you're in playing shape again, whenever that may be. Usually, it takes some set number of days of sitting out and recuperating. Some medical treatment. Some downtime. Some coaches bring players back on less rest, some coaches use more -- my last post on injuries tries to get at the heart of the coaching side of NBA injuries by looking at raw numbers and assigning them to coaches. In this post, I'm more interested in simply translating some player-side numbers from 2011 to the compressed season. This is more like my previous analysis of compression trends, except instead of trends, this involves cold hard facts.

The guiding hypothetical to this post: if players were to go through the exact same injuries in the 2012 season as they went through in the 2011 season, how many more games would they miss? Good question, voice in my head. Let's go find that out. To the spreadsheet, once again.

I'll start by describing the data methodology. I didn't do every injury from last season -- that would take a really, really long time. This still took a pretty long time, but not nearly as long as it could have. For this spreadsheet, I started about midway through page five of this topic, where an international NBA fan essentially kept a running tab on the NBA's injury reports. In another tab, I had SBNation's player profile feature up -- SBNation's player profiles have an incredibly useful feature where in the bottom corner of the right sidebar you can find a record of a player's injuries and transactions. Whenever I saw a player come up in the forum topic, I looked up the player on SBNation and ensured they missed time. I then put all instances of their missed time into the dataset. Which, again, can be found here.

In the interest of non-overweighted numbers, I ignored players that missed so much time that translating their injury would mean they miss all or most of the season -- single injuries that led to more than 35 games of missed time were excluded from the data. I also excluded injuries that occurred before December 25th, 2010 -- reason being that it would skew the relative weights. I excluded most injuries only spanning two days with one or fewer games missed -- I still have one or two one-game missed periods, but those are all at least 3 days. When I'd compiled the starting and ending dates of all 2011 injuries in my dataset, I then opened the NBA's official calendar (example here) for each team and, team by team, counted out how many games they would have missed if they'd suffered the injury they sustained in 2011 in the 2012 schedule. The results, while not surprising, are a bit eye opening, and put some actual numbers to the intuition.

The overall trend isn't staggering by any means, but it puts some hard numbers behind the general idea that the same injury is going to mean more to a team in 2012's compressed schedule than it would have in any normal season. Let's ignore, for the moment, that a single game is (percentage-wise) more impactful in 2012 than in 2011. We assume that 2011 was a normal season for injuries, a relatively safe assumption. The following chart gives a look at solely the incremental games missed if any of the 101 injuries in the dataset had occurred in the 2012 compressed schedule as opposed to a normal 82-game schedule. That is to say, how many extra games were missed solely on account of the compressed schedule? Click the graph to go to the chart in the spreadsheet. 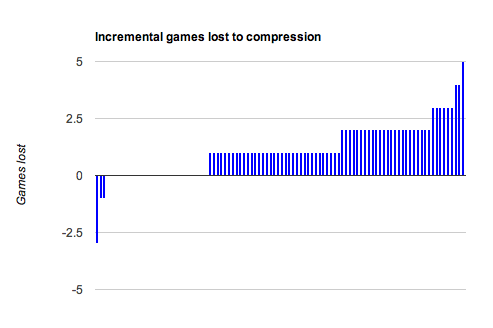 Quite a few. Over the course of the whole season, 622 games were lost to injury according to my dataset. Were those games played under the compressed 2012 schedule, that 622 would balloon to 731 games lost to injury. A difference of 109 games over the entire league, a significant result in and of itself. Using per injury numbers, you find that simply changing the schedule from 2011 to 2012 leads to a total of 1.11 more games lost for each injury in the dataset. When you consider how many of the injuries in this dataset are actually relatively small-time injuries, that number starts to seem a little large. To wit, a scatterplot with the number of games missed to injury on the x-axis and the number of incremental games lost on the y-axis. Again, click for the spreadsheet. 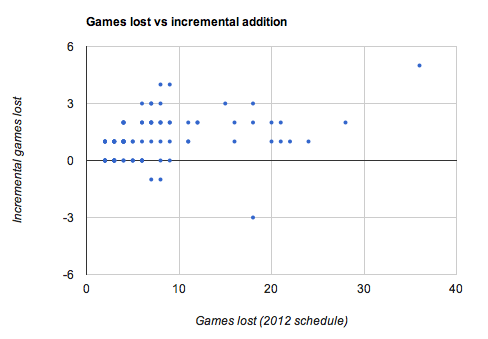 This chart reveals the most deadly part of the incremental additions. They aren't really distributed in a predictable way. There's a slight upward trend if you do a simple trendline, but in general the added 1-2 games of loss you experience when translating injuries from the 2011 schedule to the 2012 schedule is going to happen essentially without regard for how many games your injury is. That's a big deal. You can expect an extra game or so for even the most minor injuries -- for example, the 2-game loss Chris Paul had last season for his minor concussion? That balloons to four in this dataset. Chris Bosh's short four game stint with a sprained ankle in late January last season? That's eight games in 2012. Dirk's nine game swoon during his ankle sprain? Eleven, meaning that the Mavericks would play a whole 16% of their 2012 schedule without Dirk if he had that injury this year. Tough cookies.

And that brings us back to the percentages -- raw games is a good way to look at the extra losses, but doesn't account for all the lost value inherent in the season simply being shorter. Taking the average numbers from before, the average injury in this dataset took up 7.74% of the player's season. (Notice I say average injury. Many players had multiple injuries -- it took up more of their seasons.) We've already established that on average, players missed more games for the same injury. If you compound that effect with the effect of the compression itself, you find that the average injury translated to 2012 takes up 11.3% of the player's season in the translated schedule. That's a big difference, and remember, we're talking about the exact same injuries. We aren't accounting for the time it takes for them to get back. We aren't accounting for the added stress of too-close for comfort travel. And we aren't accounting for added injuries at all, these are exactly the same injuries.

... anyone else concerned for the league's resident old folks? Juwan Howard, take a day off.

In short? Expect every injury to matter a lot more in the 2012 season than they did in 2011, for reasons of scaling and the compressed nature of the schedule itself. Injuries mattered, last year, but in 2012 they're going to be more influential. And if 1999 is our guide, there will probably be quite a few more of them. Which creates, in turn, a cascading effect -- each injury is more important, which makes coaches want to bring players back as quickly as possible, which leads to more injuries. It's a vicious cycle, and one the NBA probably should have thought about a bit before releasing this meat-grinder of a schedule. But it's one that we as fans will happily live with -- if we have to have a stupidly compressed schedule for the sides to agree to have a season, I don't know about you, but I'm good with it. Well. Maybe not good. But I can deal with it, you know?