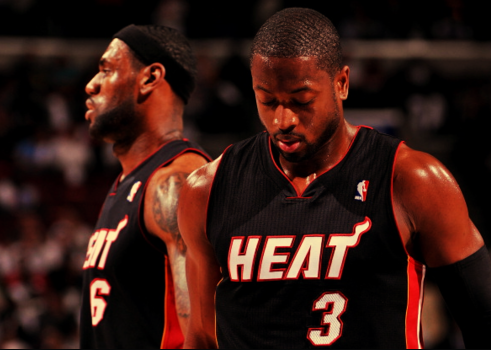 The Miami Heat have two more seasons as odds-on title favorites. Then it gets a bit murky, and if everything doesn't go right, they may very well end up worse off than the last 3 Cavs teams LeBron played on -- except instead of LeBron in his prime, they'll have him on his way down. With even less roster flexibility. Sort of weird. Strange. Ridiculous. And -- as I outlined in my new piece for 48 Minutes of Hell outlining the Spurs' ongoing difficulties compensating for Duncan's decline on the offensive end -- it's essentially rooted in a single concept. The respect defenders have for him. And something that, in a few years, may be nothing but a fond memory for any talent tasked towards defending the Miami Heat. Let's explain.

In the same way the post about the Spurs offense focuses on Tim Duncan, this post will focus on Dwyane Wade. To begin, a fact -- Wade turns thirty in less than a month. His current contract with the Miami Heat is going to take him all the way to the age of 34. There are only 6 guards at that age or older who played more than 30 minutes per game last season Raja Bell (34), Andre Miller (34), Chauncey Billups (34), Ray Allen (35), Steve Nash (36), and Jason Kidd (37). With the key exception of Andre Miller, all of those players are old men whose games at this point rely on a combination of shooting talent and key pocket passing. Most of them who were once good defenders have fallen off in at least a few key ways -- for instance, while Kidd still does his defensive work quite well in isolation and bothering the pick and roll ball handler, he's slowly degenerated at defending spot-ups and post-ups as he ages. Ray Allen has done a similar turn, though he fell off somewhat hard on isolation and spot-up defense while maintaining his surprisingly solid ability to stifle the few guards that try and post up on him. The pattern of spot-up defense being their worst ranked defense holds true for all of the members of this list. As far as I surmise, as a star SG's quickness wanes, they begin to lose the ability to properly recover on spot-up defensive possessions.

This is relevant to Wade for many reasons, but the primary one is that he's already beginning to show signs of rust in how he recovers on spot-up assignments. I noticed this in the finals last year and the numbers bear it out -- as with all the defensive players above, Wade's worst defensive category per Synergy is on defending spot-up shots (ranked a dismal 261st in the league), dragging the overall Synergy assessment of his defense despite sparkling numbers in most other categories. And let's not beat around the bush -- of all the "passes the eye test" defenders in the league, Wade passes all of them. As a guard, he's rated the 10th best defender on the pick and roll ball-handler and forces a turnover nearly 20% of the time. The Heat were an incredibly good defensive team last year, and Wade was one of the biggest reasons. LeBron and Wade formed the best two-man defensive unit at obliterating the pick and roll in the league, with LeBron forcing turnovers on a ridiculous 30% of the plays he defended the pick and roll. The two of them combined to be as efficient at defending the most effective play in basketball as a generation-defining big man, and together kept teams away from easy baskets as effectively as Andrew Bogut or Dwight Howard did for their squads. If you wanted to make a list of singularly important reasons the Heat were such a great team last year, pick and roll defense should be extremely high on the list

Now, this isn't to say Wade is necessarily about to fall off a cliff. He's simply beginning his long rusting process. He's no longer in his prime, or improving -- every year that passes is a year where Wade will at best stay level with where he is now. At worst, he'll take one more step down the ladder. From the Heat's big star to the Heat's big albatross. He's showing some signs in the way his defensive skillset is aligning with age, yes, but the 2012 version of Dwyane Wade should be roughly as good as the 2011 version, if not perhaps a bit more willing to cede usage to LeBron and Bosh. But his defensive rust isn't the main point of this post, merely a useful observation that helps lend credibility to the nagging problem now that's going to become significantly worse for the Heat in a year or two. Wade will almost certainly lose his legs on defense slower than he'll lose his legs on offense. My reasoning, as follows. 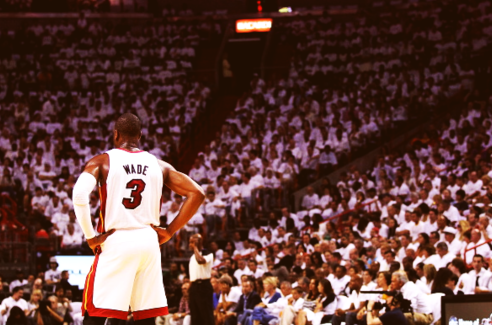 The long and short of it is this. Wade is aging. Quickly. Again, he's 30 in less than a month. His game depends on athleticism in a way Kobe's sweet-shooting ball domination and Ray Allen's spot-up brilliance never did. His value as a shot creator isn't rooted in the purity of his stroke or even the efficiency of his shots -- it's mainly valuable through the aura of intransigent power that permeates Wade's image. Much like the Duncan banker, coaches and players flock to double Wade and apply extra defensive pressure -- not because he's a particularly good shooter from the long range, but because he can take heavily guarded shots (and make them sometimes) and, well, it's Dwyane Wade.

You simply don't leave him unguarded. He'll kill you! Rip your defense to shreds! He's DWYANE WADE! But just as the slow death knell of the Duncan banker means more for the Spurs offense than simply the loss of efficiency, so too will the effect of age on Wade's second gear and his ability to score. As his aura of invincibility fades, players will gradually stop playing him quite so hard. When they do, Wade will have problems making them pay. If he's not driving the ball into the teeth of the defense successfully or drawing free throws, what exactly is he going to do? He's not like, as I said, Ray Allen -- he's not simply going to shrug and drain threes in their faces with his ice cold tiger blood. That's not how he does it. Wade is a superstar, but one for whom the comfort of his descent will be lessened by his generally awful grasp of the outside shot. He will be limited to a variety of moves that, post rip-move, will be slightly less valuable and slightly less prone to success. And he'll be defensively less useful the older he gets, as well -- once his lateral quickness fades, he's going to have quite a bit of trouble being the quasi-big man sort of value he is right now on the defensive end.

But most of all, when teams begin to simply let him shoot, the spacing that allows the Heat to overwhelm teams will become quite a bit less potent. The entire reason LeBron was still so effective in Miami wasn't that he's a good off-the-ball shooter (he's as bad or worse than Wade at spotting up), it was that the amount of respect Wade gets from opposing defenses opens up the court for LeBron to do his thing. LeBron had a similar effect on Wade. It wasn't pretty, in a pure basketball sense, but it WAS effective. As Wade ages, and loses that second gear that makes defenses so hesitant to lay off him, that spacing advantage vanishes. And so too do LeBron and Bosh see their efficiency decrease, and their three point gunners see their shots get a bit harder, and a whole lot of other problems. And as he falls off on defense, well... they don't have quality defensive big men to replace the pick and roll mastery that the LeBron/Wade twosome brings to the team. Without Wade having a big-man level defensive contribution, their defense begins to fall apart. The immortal Heat begin to look, really, quite mortal.

This brings me neatly to the concluding point. As the 2011 Mavs most recently taught us, title windows are not static entities. They bend. It's hard to ever say the title window is truly shut, per se, so long as the team makes the playoffs in full health. There's nothing to say the Heat won't be able to make a few key roster changes, or alter their player's roles to accomodate Wade's decline (as well as the impending declines of Battier, Miller, and Haslem) -- Pat Riley is a good GM and Spolestra is a deathly underrated coach. If there's a set of two who could do it, it'd be those two. But the key is that i_n two years, this isn't a title favorite. Barring a complete and total stop on every other talented rising team in the league, the Heat two years from today will not be the favorite. I can't really stress this enough. The LeBron "not 2, not 3, not 4 ..." line looks even more ridiculous now. They may win 3 or 4 rings in a dominant stretch as LeBron makes good on his talent and Bosh/Wade morph into perfect complimentary pieces. It's a possibility. But the Heat's window as a top-tier contender is remarkably small for a team billed to be a dynasty for a new generation, and Wade's shaky injury record (which, for the record, _I didn't even discuss in this piece) makes it even more tenuous. Not to mention that Wade's game is unfortunately poised to age less like a fine wine and more like a carton of delicious eggnog. It's rather remarkable.

This season, though? Different story. They'll be the best team in the league, and probably win a title.

One last thing, before I go. I was featured at Fear the Sword earlier this week in a recap of the Cavs' last preseason game. And, to state the obvious -- I'm incredibly excited and honored to be joining the staff at 48 Minutes of Hell, one of my favorite blogs ever. It's kind of a dream for me. Wanted to add this footnote, though, just to clear something up: my new post at 48MoH doesn't affect the Gothic in any way. This is still the blog I started and pay for -- I'm not giving it up or lowering the quality of my contributions. The 48MoH stuff will be alongside my work here, not a replacement. Regardless, this may be the last you hear from me until Christmas, when we'll roll out the win-prediction model I described the other day. So, in case I don't catch up with you til then: a very happy holiday season to all our readers. As long as you'll be reading, we'll be writing. Stay frosty. 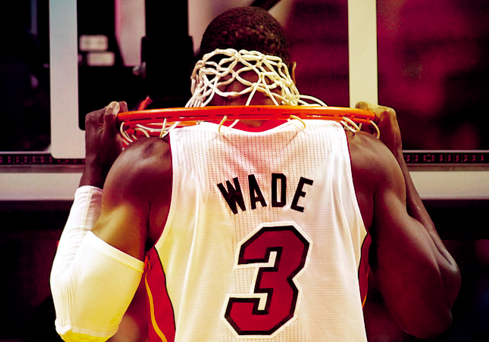