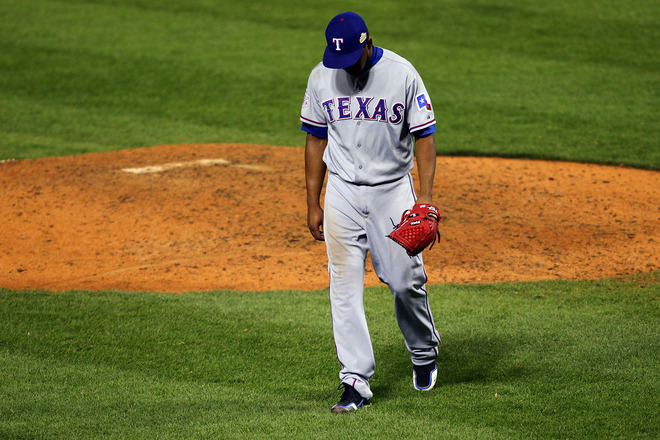 ... Except for the part where they didn't. Explanation time. I wrote those words at roughly 11:41 PM, EST. The Cardinals were coming up for their last half inning. The Rangers were up 2, and had Neftali Feliz coming out -- a closer who, like Valverde, makes you sweat a little but reliably gets his three outs about as well as anyone. And yes, he certainly made it interesting. Struck out The Riot to get the Cards down to two outs, gave up a double to Pujols, walked Berkman, and got Craig on a nasty pitch. Then he got David Freese out to his last strike. Cards still down two. So I looked away from the TV and continued writing my post.

Whoops. With the game suddenly and without warning tied, I put down the computer and watched the game. Within 10 minutes, the Rangers had once again built a two run lead in the 10th on a clutch Andrus single and a Hambone homer. And once again, I picked up my computer and continued to add things to this post -- I was intending on posting it last night, after all. And once again, in the bottom of the 10th, the Cardinals were down to their last strike, and pulled out a clutch Berkman hit to tie the game and send it to another inning. But the Rangers' magic was gone -- they wouldn't score again, while Freese would proceed to blast Mark Lowe's fifth pitch of the game into the stands to make Lowe the game's loser and to force a game 7 that looked completely inconceivable not but an hour before. And made this post almost completely irrelevant, where it will only become useful if the Rangers win the world series tonight -- a tough thing to call.

Let's start from the top, I'll get back to the Rangers later. I root for teams like the Browns, Indians, and Cavs, and I often find myself lumped as simply a Cleveland fan. A blank-slate advocate of the Cleveland losers. But that’s not really true. Each of those three franchises means a very, very different thing to me. Their mythos and history has a different impact. A title in any sport would have some kind of a meaning to me — just different ones. I am a fan of all the franchises, but I’m not just a blank slate who views each teams in exactly the same way. The teams are, simply put, entirely different things. And while the similarities may be jarring, when they’re different sports, it’s pretty hard to make any kind of a “look at these similar teams, look at these Cleveland fans” equivocation with a straight face knowing how completely differently I personally view the different teams that make me a “Cleveland Fan.”

What does this have to do with the Rangers? Well, I felt like it’d be decent to write a post about the similarities between the 2011 Dallas Mavericks and the 2011 Texas Rangers. In a broad sense, the Rangers and the Mavericks are in similar positions right now relative to their history. The Mavs were, historically, a broken team deep in Texas that never got anything done in the playoffs. The Rangers were the same. The Mavs went through a period of turbulence and change under a hotshot new owner that was willing to spend for talent and didn’t like to take losing for an answer, and came out of it with a two finals appearances and a title. The Rangers were the same (belaying the title part — after losing this game, I have sincere doubts that the Rangers are going to win it this year, but that’s a story that hasn’t been written yet). The Rangers would’ve won the series in six after falling behind 2-1 in the series in a set of three games that could’ve easily been 3-0. The Mavs, well, you know the deal.

There were a lot of alluring subtexts to latch on to, and a lot of interesting similarities. It certainly warrants a post. But I couldn't get far in the post because I realized that on a visceral level I take issue with this narrative. It's for the same reason I take issue with the "Cleveland fan" meme. I feel that making that sorts of equivocations about two very different Dallas teams inherently disrespects people who, like me, may not really give a flying fuck about one of the teams in question. The idea that the two teams weren’t just two great teams that happened to be in the same city, but two wayward franchises on the exact same eldritch path to success. It's the same problem I have with lazy writers calling Cleveland sports teams perennial losers or calling Boston a winner’s town. To compare the Rangers and the Mavericks on a basic level and note their similarities and the way they’ve both turned their franchises around is one thing, so long as you continue to respect their individual identities as teams. But to go farther, to haphazardly conflate their narratives into one combined mess? That’s another story. There's nothing that really legitimizes the practice of describing all of a city’s franchises in a simple “this city’s a loser, this city’s a winner!” sort of way. Which is exactly what most of the journalism highlighting these franchises has done.

The Mavericks’ title was a Dallas title, and their title will forever be a part of Dallas’ sports lore. But it’s the Mavericks’ title first and Dallas’ title second. And were the Rangers to win a title -- theirs would be a Rangers title first, a Dallas title second. No real connection other than the city, a few overlapping fans for whom the franchises still mean very different things, and the magic of journalism. A few specious comparisons make for some interesting analysis, but it's not really all that valuable -- even if it may have the potential to be the enduring storyline among sports journalists, it's not what the fans will remember, and it's really just not what's important.

In the end? Really weren't all that similar after all. Fancy that.