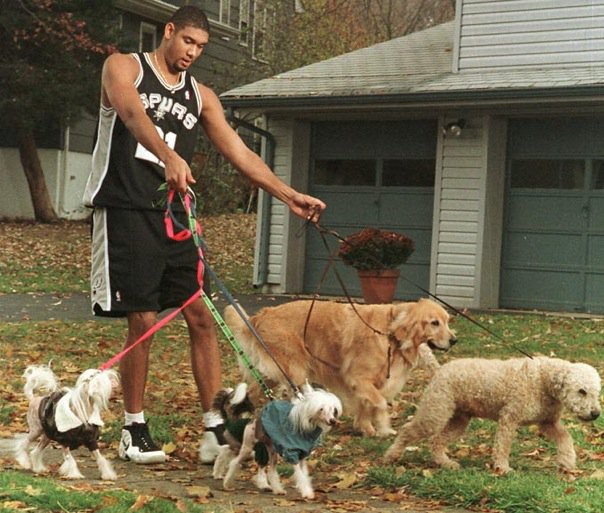 "The easy answer is that he doesn't want it to be out there. And yet Duncan did in fact star in several national ads in his first few years in the league, so clearly he's not totally averse to getting media attention. What's more likely is that Duncan's personality, as nerdy as it is, was decided to be too out there for a basketball star. His media anonymity might not have been self-imposed, but rather decided by the companies who need to project a particular image when they hire athletes as endorsers.

That's fine, obviously: Duncan's doing fine for himself. But it's a reminder that what we know of players' personalities often isn't decided entirely by them. Sometimes it's up to the corporate gatekeepers who decide which players fit their needs."

There are niche actors all over Hollywood that exist specifically to play a single role in commercials. Basically Freeman is telling us that professional advertisers can't find such a role for a nerdy, iconic (apparently willing) basketball player with MVP-type credentials for the better part of a decade with a more-or-less impeccable public record. According to this narrative, Duncan didn't tempt large advertising firms enough to offer him a big ad campaign because his nerdy personality is too out there. And that just doesn't add up to me.

I'm definitely not trying to idealize Duncan or insulate him from the forces of economic motivation just because he is a class act on my favorite team but Freeman's unqualified cynicism seems to follow incredibly specious logic here. If Sprite, Edge, and adidas were willing to sponsor him and give him national exposure when he was a rookie (and when he was writing weird stuff like this), why wouldn't they be willing to continue that exposure as Duncan built the Spurs into a dynastic force as the foundational force? Duncan - for all the talk about the Spurs being boring, dirty floppers - has always been fairly well-regarded, especially in terms of character and consistency. The question I have for Freeman is: Did "corporate gatekeepers" overlook that? Are you seriously telling me that with all the weird, abstract ads from the last decade that an ad firm couldn't find a national spot for Duncan selling something "boring but dependable" like insurance or something "fun and nerdy" like sports video games or something "with a quiet tenacity" like batteries using Duncan's reputation?

Yeah, I'm a big Duncan fan, so maybe I'm just overestimating the imagination of ad men and Duncan's Q rating. But I find Freeman's explanation incredibly tenuous, especially when there's a much more likely explanation: Rookie contracts and the economic uncertainty of injury, and those rationally explain Duncan's increased willingness to seek an ad campaign early in his career far better than a Mad Men-esque box-out of a willing Duncan. See, Tim Duncan was on a rookie contract for his first few years in the league, when he had a much less comfortable and uncertain amount of wealth (according to Basketball-Reference, Duncan earned a relatively paltry $3.4M for leading the Spurs to the title in 1999, and less than $4M the *next year*). If he had gotten a career-ending injury early in his career (before the big paychecks), it's possible the next few years of public commercials could have offered him a tenable, remarkably wealthy start to the next part of life. Being an intelligent guy around wizened veterans like Sean Elliott, Avery Johnson, Steve Kerr and David Robinson, it seems absurd that Duncan wouldn't be aware of the ways in which a basketball player's fortunes can change with a single injury, and so he might have chosen those spots on the sheer level of ameliorating that financial uncertainty a little bit. What's more, even though he stayed healthy, Duncan's short-term contract was absurdly below his market value (thanks to the NBA's cartel and the most recent CBA that had altered rookie contracts into their less lucrative form), and these spots also served to compensate Duncan with an income much closer to his true market clearing price and a decent amount of unqualified positive public exposure. Personally, that seems to me an economic explanation that doesn't rely on unfalsifiable hypotheses about faceless corporate gatekeepers.

Finally, well, by all accounts any of Duncan's apparent "nerdiness" (which Freeman aptly gets at in the article) comes in at least equal measure with a taciturn, understated, stoic personality that sees both rising and falling fortunes as transient and imperfect, which is a picture you'll get (often in those literal terms) from any interview Duncan has done in the last 15 years. With Duncan's personality as it is (or at least as it appears by all accounts), it's pretty plausible to say he's somewhat reluctant to endorse companies for massive national exposure as a sort of "victory lap" for his successes, when he knows an athlete's fortunes are always trending downward with the ultimate (and swift) passage of time. Maybe he's just a quiet guy that wants to hold up the trophy this year and go at it again next year until he can't anymore, as he's specifically said in multiple interviews.

Freeman is giving us an interpretation that Duncan's image is low-profile because his "nerdy" personality was not picked up by unnamed "corporate gatekeepers". But this interpretation is specious, given any interview, profile, or secondary account of Duncan's life and personality, which has him as genuinely avoiding the spotlight and the transient joys and pain of victory of defeat. And Freeman's only evidence to overturn this large body of evidence seems to be two commercials that Tim filmed during Duncan's insanely below-market rookie contract. But once you can account for this below-market contract, then everything else is consistent with someone that genuinely wants a low profile. Duncan was well-compensated after his rookie contract and the ads stopped for the most part, except for the occasional well-written and funny ads (Sprite, edge), in-depth profiles (adidas), and local shilling for his owner that's redeemed by humor (HEB). Father Time is undefeated, and Duncan knows it, so maybe a completely financially taken-care-of individual decides instead to make his few moments in the advertising sun about mentoring, reflecting, and laughing. I don't know but that seems far more likely_._