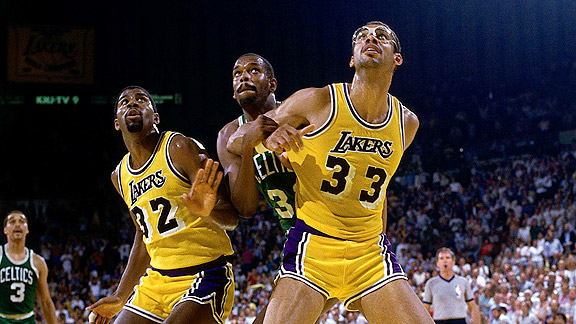 In celebration of our opening night, we're going to try the good try to make up for the NBA's lack of one. We're going to try and make it up to you by posting three full classics of NBA matchups of the teams that WOULD have been playing on opening night, if the season's schedule hadn't been scrapped. Here's game #2: the chill zombies of Seattle vs a star-studded Lakers team.

When I noticed that OKC was playing on the opening night that was not to be, I had a short debate with Alex as to whether we should restrict our search for games in the last few years where the franchise was actually in OKC (and games from when the Hornets were in OKC) or just open ourselves up to Seattle in hopes of using some actual classic games. It didn't take all that long for us to decide we'd extend our search. After all, what kind of a classic is a 2010 playoff game, really? Nonetheless. The game we have for you may not actually feature OKC, but it's still a pretty great one -- it has a still-rookie Magic, a still-spry Kareem, a still-ballin Dennis Johnson, and a still-underrated Gus Johnson. It also was the clinching game of the eastern conference finals, with Kareem doing what Kareem did in clinching situations.

Click the jump to watch the full game on Youtube (credit to lakeptic), with my "expert" commentary.

Click here for the full playlist with all 12 parts of this game.

When the game begins, the first anachronism lies in the announcing team -- namely, that it includes Bill Russell. And don't get me wrong. This is a great game. For the basketball, yes, but most of all for the fact that Bill Russell is part of the announcing team. I mean. Really. I can't overstate this. You have Bill Russell, doing color for a clinching game in the old LA forum. Really. Is he good? Not really, in the usual sense of the word. Though he's entertaining, witty, and soft-spoken -- not necessarily what you'd usually expect out of a color guy, but for some reason, it works. I don't think it'd work for any other commentator, but for Bill Russell? It just works. Hearing him compare every other Kareem play to something he did is pretty hilarious, too, and overall it's a worthy try as a big-game commentator. I wouldn't watch an old game just to watch, say, Kevin Harlan (a tried and true murderer (not really)) commentate, but I can't say I would be opposed to watching an old game simply to watch Bill Russell commentate it. He brings something to the games most color guys don't in this day and age. And that's worth something.

It's also worth something to stare longingly at his tendency to give the Lakers literally zero credit for anything they succeed at doing on the court -- the game begins, on this note, with Russell essentially predicting that the Lakers will lose the series if they lose tonight's game, despite holding a 3-1 series lead, because "Seattle can't be beat at home" (Russ: Seattle had already lost two games at home in THIS SERIES) and "anyone can win a game seven" (Russ: YOU NEVER LOST A GAME SEVEN IN YOUR LIFE YOU ARE THE SINGLE LEAST LIKELY PERSON TO SAY THAT). It's kind of hilarious. Also hilarious is the awkward attempts the other announcers make at talking with him -- he clearly is not comfortable with them and dislikes them. A lot.

You know the showtime Lakers. But the Sonics? Who are they? For lack of a better word, they're an incredibly scrappy team. The team you see here are the defending NBA champions despite having only one HoF player in an aging Dennis Johnson, and few particularly generation-defining players beyond him. They hawk the passing lanes quite well, and they take full advantage of Magic's occasional over-passing. They're GREAT at penetrating, and their offensive sets use every player on the floor -- the difference in styles between these Lakers and these Sonics is huge. Whereas the Sonics play a five man offense where you don't know who's going to be scoring (though Gus Johnson is a strong "the world is falling apart and we need a basket" option, for this game only), the Lakers essentially give Magic and Kareem the ball on every possession and give them the levity do something with it -- the other players on the floor are, for this year, little more than agents to catch passes, take shots, and establish pivots.

On that subject: Kareem is amazing in this game. Absolutely splendid. His fight on the boards, his offense, his shot blocking -- it's great. He had 3 blocks in the first 7 minutes, seriously. It's hard to find fault with Kareem's game, too much. He dominates on offense, runs the Lakers' offense, and runs up the floor like a gazelle. He had some great weakside blocks, some great pocket passes, and multiple "only Kareem could do that" type shots. But given the way I composed this paragraph so far, there's a caveat. And it's rather big. It's his defense. Honestly, it isn't nearly as good as I was expecting. Despite his legendary blocking ability, the Sonics were getting virtually anything they wanted inside. As it turns out, if Kareem doesn't block your shot, he doesn't even try to contest it. He's a great shot blocker, so that's still a relatively valuable contribution, but his general intangibles on defense are honestly pretty poor. He uses his size poorly on defense, and gets caught sleeping on defense way, way too often.

And LA's other defenders? All pretty poor. Seattle took advantage of LA's poor interior defense all night long, first by faking out Kareem and then by taking advantage of a two-cut strategy -- one Seattle player would cut into the lane, the LA bigs would all collapse on them, then while they were out of position because they were ball-watching, another guard would cut in, recieve the ball, and either get an open shot for himself or one of his teammates. It seemed like almost every play of the first half featured some variation on this whenever the Sonics were having any trouble getting an open shot -- even Bill Russell commented on it, as well he should. The problem? The Lakers were infinitely more talented than the Sonics, and cut their (reasonably good) defensive schemes to shreds on the other end simply with Magic and Kareem (easily the best player on the 1980 team, no offense to Magic) outworking and outhustling every Sonics defender. There are some benefits to having two all-time players on your team. Even though their defense was, again, pretty poor.

Perhaps the best play to demonstrate the Lakers' general malaise on the defensive end is this gem -- here, Magic throws an absolutely spot-on fully guarded cross court pass to Kareem, resulting in a surprisingly not wide-open (but open enough) jam for Kareem. Instead of rushing back on D, or cutting off the pass, Kareem throws his arms up and entices the crowd to cheer louder. The Sonics take advantage of Kareem ignoring them to throw an unguarded cross halfcourt pass, which is immediately flung to a cutting Sonic. This tends to summarize the defensive style of the Showtime Lakers pre-Worthy -- borderline GOAT play on offense, distracted and disinterested defense as they struggle to do basic defensive tasks like "pay any attention at all." Or "apply a modicum of focus to preventing the cutter from entering the lane." Or "full court anything."

But really? This team had Magic entering his prime, Kareem still in his, and a borderline decent supporting cast. What the hell else was going to happen this game? The Sonics were a good team. DJ is a hall of fame player. But while they were a good defensive team, no defensive-oriented team short of "all-time great team starring Moses Malone or Hakeem Olajuwon" was going to deny Magic and Kareem when they were both in prime playoff form. The only way you were going to beat the Showtime Lakers was by having players who could outscore Kareem and Magic and shutting down the Lakers' tertiary pieces. The second wasn't hard to do. The first? Come on, now.

Long story short? Alex got the brew, I got the chronic depression. Also, the Lakers beat the SuperSonics.