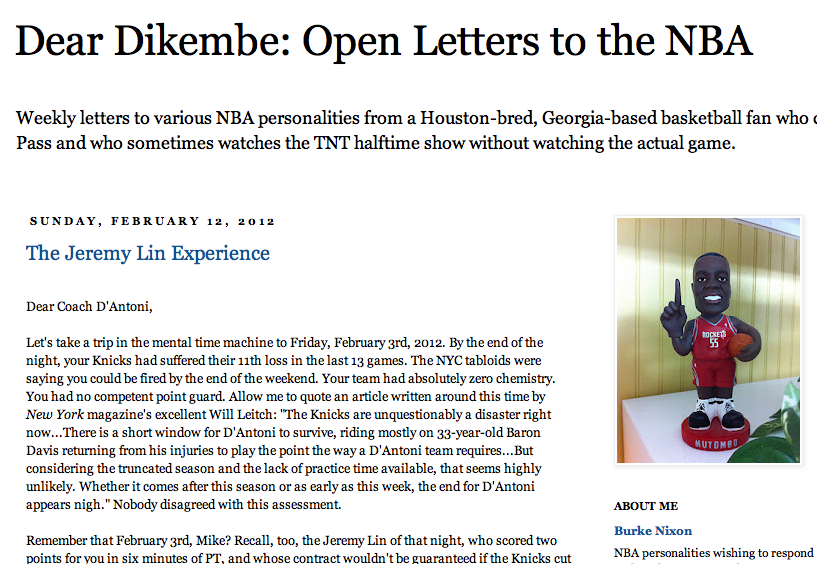 Recently you pointed us to your blog (Dear Dikembe: Open Letters to the NBA). The blog's premise could strike someone - like me, for instance - as quite strange. Oh, it's interesting: on Dear Dikembe, you incorporate all the myriad reports and information out there about NBA players into your own experiences as fan and teacher. And then, when you have something interesting to say about a player, you address him directly in a long, open letter (like this one), generally made from long, open sentences (like this one).

What's odd about this premise is a bit hard to express. I write fictional pieces all the time about these same players and it doesn't feel strange and I can't really account for the difference between our approaches. Maybe it starts with the asymmetry of the fan experience: While this is so obvious it's barely worth saying, it's rare when fans are themselves objects of fandom (and especially rare when it's by the same celebrities they're fans of). So - for the most part - public fandom of players simply doesn't go both ways, or if it does, the "mutual" part is usually overly generalized for the players ("my wonderful fans") and overly individualized for the fans ("Marry me, Dirk"). It's a glaringly asymmetrical relation. King-Subject, King-Jester, Patron-Artist, etc.

And you, Burke Nixon - presumably the same Burke Nixon most well-known for authoring an interesting short story that won first prize in a short-story contest according to my cursory research - are not LeBron James' idol or even someone he acknowledges personally. I'm not in this group either (and I've never won a short story contest, either!). It's simply unlikely that LeBron James would decide to write you a personalized letter. And of course, this is assuming that LeBron had found your letter in the first place, which is mathematically unlikely. After all, why would he find you of all people - I could ask - instead of the hundreds of other incredibly articulate writers writing the same types of things, many presumably with the same or better acumen in marketing? And even if he did write something - to you - it would most likely not be in an open, long-form letter that would satisfy and add context to your original piece. Finally, even if he did write something in exactly the right format with some interesting substance, the letter would be bogged down by the self-censorship and self-promotion that comes with status as studied public figure: All his words would be shaped in various ways by his media empire and pressured by the possibility of litigation and ridicule. So yeah, responses are not happening, probably. Not systematically, at least.

But I also don't think you're shooting at a dartboard with a blindfold. I think you do want a response from these athletes, but you're also acutely aware of these asymmetries that make response unlikely. And I don't think one response by an NBA player would vindicate your enterprise by itself *. Finally, I don't think you're wasting your time. You write with lucid prose and apparently sound mind and a lifetime of earthy experiences. I suppose I could assume that despite all of this, you're consumed by delusion or you lack a theory of mind or you're otherwise possessed by something else that would allow you to miss the simple unlikelihood of a response. I mean, I've read enough blogs that it's tempting for me to explain away Dear Dikembe's entertainment and literary value by saying that you'd just missed the point entirely and fallen into an interesting obsession -- as I'm wont to do myself. And that would be a fine, neat, simple explanation, and there are enough intelligent people that fall into this trap that it's plenty plausible. But I can't in good conscience tell you that you missed the mark a little bit, or that you have all your ducks in a row but are swimming on the wrong lake, so to speak. No, I can't say anything to denigrate or marginalize what you've done. I can't make it strange, as strange as the premise is. Which is in itself incredibly strange.

Instead of missing the asymmetry of fandom or refusing to acknowledge it, you've met it head-on, and from there you've subverted this asymmetry to your own ends. By recognizing that a response from an NBA player is really incredibly unlikely, you are able to make statements that are so direct and uninhibited that you completely avoid the inherent strangeness of fandom in your writing. Yes, you may be a fan writing to athletes, but thanks to your format and your recipient-may-care approach, you don't write like a fan. I'm not saying you're writing as an anti-fan - that is, something like a surly, gossiping beat writer, a cynical analyst, a player-hater, a detached stats guru, or all of the above. No, that's not it; it's just that you're writing from an subjective angle that is - by design - absolutely independent from your fandom or lack thereof. Even when you're talking about, say, Ricky Rubio and how much you enjoy watching him (is there any sentiment more typical from the perspective of a fan?), your form is essentially an unblinking monologue of a fictional conversation with Rubio, which turns out to be subversive of a bunch of unstated conventions about fandom. "I like watching you, Ricky Rubio, and I'm assuming a specific soccer metaphor will help you understand some aspect of where I'm coming from here." That's the beginning and end of the social conventions pertinent to fandom in your work. It's as simple as anything, and it clarifies everything.

What I'm saying is that you've achieved with your form what all writers aspire to: You have a form where you can simply think out loud, with no middleman. I'm not trying to deny a potentially extensive editing process, I'm focusing on your end product, which is incredibly direct.

And while I didn't think of this originally, re-reading this review a few days later I can't help but notice the similarity to another sort of open letter. You see, it looks like Tim Duncan has you beat by about fifteen years stylistically. Check this out. That's a comparison that has to be made, right now. Almost straight out of college, Tim Duncan decided to take on a rather collegiate assignment, just before he got his first NBA title: He psychoanalyzed himself for a magazine (nothing is more collegiate than that without adding "for his ethnic studies requirement"). On some level I feel that "The Psychoanalysis of Tim Duncan" largely explains Dear Dikembe: Tim Duncan in the comfortable position of explaining himself in a fun essay, being bound only by basic social conventions, has a style and an earnest exploration that directly mirrors your own style. The only obligation Tim had was to describe himself using anecdotes and ideas he'd had, and to do it in an interesting way that would keep his readers reading (it is literally impossible to tell if he had a substantive editor for his piece). The only obligation you have is to be real: to obey the most cursory journalistic expectations of honesty, sincerity, and organization, and to do it in a way that keeps your readers reading.

You just write naturally to these athletes, set everything on the table, and let the sentiment flow. You ignore or acknowledge only abstractly the fame and fortune of your recipient, but also acknowledge directly their existence as a well-documented personality, as a creator of beauty, as a moral actor with the possibility for redemption from sin and for going against their stated values, etc. You focus on certain details of flesh and spirit, and thereby establish slightly-constructed-and-fictionalized versions of individuals that exist on the same metaphysical plane as you do, so as to compare. And then you do compare yourself and your experiences with the athlete in question, and the end result is a set of sentiments common and interesting enough that anyone can enjoy them.

Don't get me wrong: The differences between author and recipient - in fame, objective achievements, and towering athleticism - are still there, palpable as the words themselves, but at some point - as the words pile up - the letter leaves only the artifacts of fandom and the artifacts are tightly-honed observations that do nothing other than to help the rest of the piece to testify to the larger sentiment of the letter. I'm much more familiar with open letters in the realm of politics, and it's an instructive comparison: An open letter to a politician is usually a fertile excuse to censure or commend that politician and the issues and values the politician is made to embody. In Dear Dikembe, the same trick is given literary and journalistic function in basketball culture. Open letters give us a way to directly access and then testify to our own stated values and the well-documented values of that athlete in order to propose a synthesis or a fertile juxtaposition in the minds of our readers. That's what jumps off the page. That's the power of the open letter.

Literature embodies more than can be embodied by your format of open letters, but Dear Dikembe makes me wonder just how much of the fan experience consists of these unwritten - heck, unvocalized? - sentiments towards athletes and the implicit expectation that our athletes respond, at least on the field of play, as if they'd heard us.

As someone who has obsessed about the art and science of reasoning and process (stated in another way: math and computer science, which just happen to have been my majors), it's fascinating to me that it all starts with your having a more direct approach than mine to the same problems I've had with - for instance - writing reviews of blogs written by people I actually know. So I've learned something from your sparse, ten-entry blog, and I can't say that to everyone. I think you're doing well, and I hope you can continue to do so with the same intelligence and personality. Best of luck to you.

* Though surely if this occurred you would be forgiven for looking in the mirror and pretending to pick yourself up at a bar by way of self-congratulation: "Damn, [insert own name], you fine: I say, 'Damn, you fine.'" is fine pick-up parlance; you can borrow that one, but only to yourself and only for this one specific circumstance. Don't use it, say, to try to pick up a police officer who is at the moment writing a citation within earshot. It would be literally true, of course, assuming that police officer had your exact name.