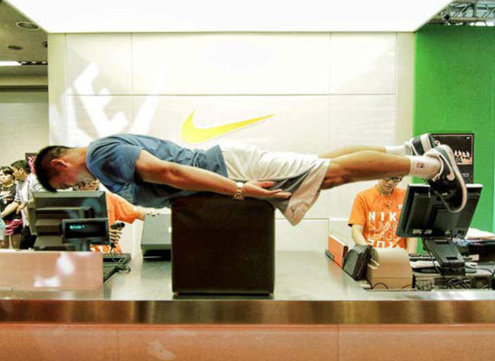 At the Mavs game, they took some time to interview Jeremy Lin's high school coach. They tell him that Lin had described himself as arrogant and selfish before an ankle injury in high school changed his whole outlook. This self-effacement is too much for his astonished coach, who replies that - as you might expect - Lin was never arrogant in high school. Lin's being too hard on himself, his coach says. And you just shrug your shoulders and smile at another wonderful paragraph in an already wonderful story. Tim Duncan is my favorite athlete, and these are the stories that come out about Tim. And about Dirk. And about Nash. These are the good old stories we've already heard, presented in the expansive wonder of the new world that Lin has created.

Now, we know that interesting mini-story with Lin and his coach only because the crew at ESPN has interviewed the coach in the midst of a game and told him what Lin had said in another interview. The media is inextricable party to this story: They've aggressively found something by pitting two accounts against one another. This is the trend: People at ESPN and bloggers and beat writers have done the research and made the calls and done the interviews, and in doing so have created the contours for a phenomenon as surely as Lin's play itself has. The personal and cultural angles that bloggers have found in the past few weeks have been nothing short of tremendous, testifying successfully to the childlike wonder of sports.

What's more, it's an incredibly direct phenomenon, without gatekeepers to stop or redirect it. The quality of the best stories are now relentlessly pushed up to the front pages through endless links and discussions. It's all about the eternal search for good content. It's all about quality, readability, and clarity now, and the power of one's subject matter. It's all about honesty now, and the time spent with drafts. And in Jeremy Lin we've found the perfect story: Lin as subject matter has revitalized this narrative-filled-but-often-tedious midseason stretch in sports media. An incredible, singular feat. And it's why we've all fixated on how many angles there were: Because we knew intuitively that sports media would thrive in proportion to the incredible number of perspectives to write from.

But I think we're collectively at a different stage now.

I used to feel uncomfortable at parties. I used to feel that the brilliant lights of a dozen pairs of eyes were too bright for this pair, and I didn't want to wear shades. I would overthink and magnify tiny concerns. I would think myself right out of a social experience and I could hear the disappointment on the other end of the line when I said I wouldn't be going out. Even at this stage of my life, I feel the same sort of pressures at first: I literally close my eyes when I enter the room. This difference is that now - after a ten-minute perplexed silence - I open my eyes, I explore the angles and the people, and I find common ground and shared past with people I've known. By the end of a party I am enthusiastic. I am one of the contributory lights. I am a spotlight on the others, bright even to a fault, and they shine on me in turn. These days I drink a little bit more and I talk a little bit louder than I used to, but it's alright because I wake the next morning, revitalized by a full experience, and I don't need to go to a party again for awhile, because I am satiated, and there is no better feeling. It's a feeling I'm expressing now, hours later, but it was wonderful precisely because I didn't need to say anything, could acknowledge my happiness in comfortable silence, could simply feel that love of life with eyes closed and another day ahead of me.

Lin is going to run the point in the second half against Dallas, which will be starting in a moment. I'm getting chills, and I'm excited to see where this goes. I do believe we're reached that point with him, where we've drunk of the story and found words and a shared past, and we've probably talked a little too much. But it's alright, because of this perfect, comfortable feeling that has followed. That feeling is fullness, is satisfaction. But now I feel that we risk becoming oversaturated to the point of sickness. So let's keep a relative silence and see where the crafty point guard with so many angles takes us next. Oh, new stories will arise, new angles about Lin will come up, not all of them with such a fairytale quality. And we need to talk about them. That's what we do. But as the phenomenon becomes an established part of our culture and what is brilliant now becomes standard high-quality fare later, let's simply take these new angles as they come. Let's allow the story to develop with measured, contented patience, rather than in an active search for another plane of bliss. Let's stay where we are, because this is as good as it gets. Let's try to hold on to this feeling, to what we have.

Because we're no longer living in a world of novelty, of struggling to open our eyes to face the truth in its perplexing surprise. No, we've opened our eyes, and we're waking to the good old days of the future, and the next time a phenomenon happens, these are the days, this is the feeling we'll compare it to.