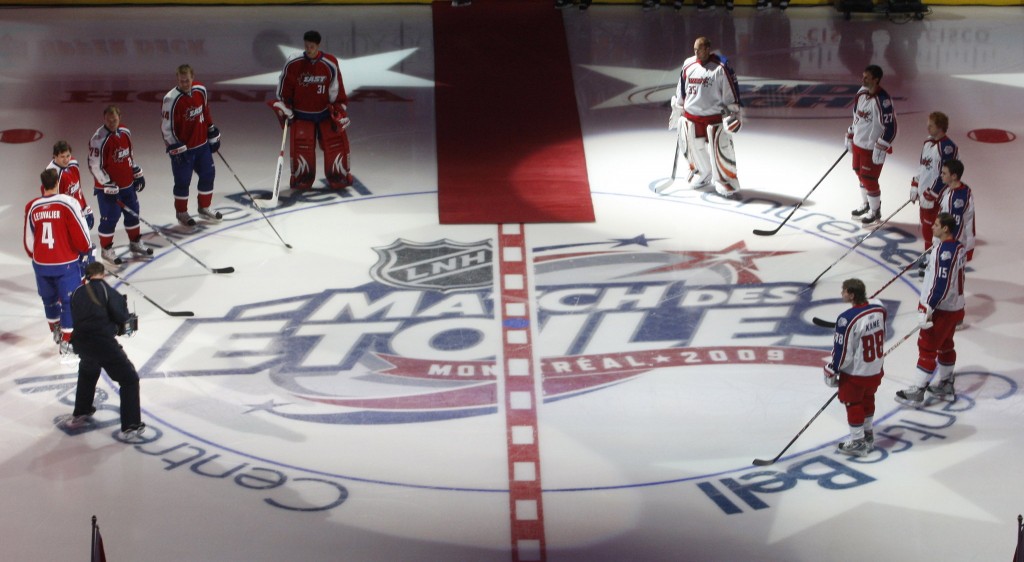 Let’s face it, the All-Star game has never been particularly enjoyable. Hell, my dad has always thought of it as a solid representation of how he felt about basketball. And he would say so:

“3 and a half quarters of boring back and forth action, and sometimes an intense last 6 minutes,” he'd say, quickly adding that he enjoyed playing the sport. He just hated watching it. He loves hockey, but he's not a one-sport guy: he loves watching the NFL and CFL. As an extra dish to his beloved hockey, that is.

Let's talk about hockey. It’s not surprising that my dad, a guy who went through his 20s watching Wayne Gretzky and the Oilers in Edmonton, (while playing the sport whenever he had free time) had plenty of pretty good reasons to watch it. And yet, hockey - usually a relatively more exciting and unpredictable game - at one point managed to have an even less passionate All-Star Game than the NBA's. The whole experience of watching the NHL All-Star Game was tantamount to watching the lockout leagues — soulless, careless, pointless.

So, the NHL realized something that we'd all known pretty damn well — it’s all about the Weekend. On its face the All-Star Weekend is no great innovation: the NBA has its All-Star Weekend, with all the excitement that comes with jumping over Korean cars, Charles Barkley choosing Allen Iverson with the 1st pick in an All-time Fantasy Draft. And yet, in recent years, the NBA has lost the All-Star battle to the NHL. How did that happen?

It’s simple, really. The NHL made everyone have fun. I mean, I bet Dwight had fun when playing point guard, but I’m not sure the guys on the bench were particularly happy about wasting their time like that. Sure, they played 10 minutes in the All-Star Game's version of Ultimate Scrubtime™, but that's probably not as fun as taking a rest from a grueling schedule, lockout or no lockout. Of course, opting out would be at least an faux pas, if not a spit in the face of the blue-white-red Jerry West silhouette.

We can do so much better. I know this for a fact: I’m writing this right after a fun packed NHL All-Star Weekend. With the rather disgraceful exception of Alex Ovechkin, the NHL's elites put some magic into the All-Star Game. Brendan Shanahan - the man behind the new format, NHL whipmaster general and former player - knew exactly what buttons to push to get people into the fun: Make it a bit more personal, affect their ego, and make everything a fight.

It all starts with the fantasy draft. Players choose players, ending the artificial East-West fight in one stroke and giving the fans answers to all sorts of competitively interesting questions. Questions like: “What if the Sedin Twins played separately?" They got their answer. Some of the players received confirmation of their greatness and others ended up getting picked last: It's hard to argue with the unblinking honesty, and it's even harder not to respond. Consider Phil Kessel, who after being left alone, like the last kid to be picked in gym class (and believe me, I know that feeling), he was mocked, forced down the throat of one of the team captains, all while Alex Oveckhin took pictures of Kessel’s walk of shame while showcasing his beautiful, nearly toothless grin. Kessel came back with a career year. Yeah, it's over-the-top to imagine LeBron taking photos of a lonely Joe Johnson last year. But wouldn't the hierarchy the draft brings to the table give the game a rougher edge right from the start? Wouldn't that kill the "no defense" dunk-fest first quarters in their tracks?

The innovations wasn’t limited to the game itself: The Skills competition all counted as one goal in the game, and only the All-Stars (and rookies assigned to both teams by the league at random) could participate in the competitions. Without the tacked-on gravitas of "home-field advantage in the World Series" or the channel-changing "random HORSE events that go nowhere," the Weekend all seemed more connected, and it all felt like it mattered competitively. The whole Weekend was a great tribute to hockey’s team game nature, something that the NBA fails to promote regularly with basketball*, electing to focus on the stars.

*No, those idiotic BBVA "if his teammate didn't get those rebounds, he wouldn't be the best passer" they play constantly on League Pass broadcasts don't count.

I’m not saying that David Stern should follow his former protege Gary Bettman exactly. That would be damn near impossible to do. But Stern should learn a lesson from hockey: These All-Star Games need storylines to work, and Blake Griffin jumping over a friggin KIA just won’t do.

Wouldn’t you love to see 2-on-2 or 1-on-1 games? Or a new skills challenge format? Or a fantasy draft*? And finally, wouldn’t you like to see a Dunk Contest exclusively between All-Star players, as chosen by their captains? Would LeBron have an excuse to run away to this time? Oh, the dunks wouldn’t be as meticulously prepared if the players were only informed about the contest a day or two beforehand, but, on the other hand it would probably make the contest come back to its spontaneous roots. No more props, no more jumping over people. Just raw, beautiful dunkage.

*This would also allow the NBA to avoid the embarrassing “We’re out of people we could put in here...” situation that's always a threat with the East back-ups.

Come on, we all dislike most of these events as they are, and you can sense that the players don't want to be there: Tell me that a few of the usually disinterested players wouldn't enjoy some of these changes. Wouldn't Kobe sure get excited about facing LeBron or Paul Pierce in a deadly one-on-one battle, with a Westrose/Rosebrook twins (And I’m referencing their abilities here) battle on deck? Teammates battling against each other publicly? Wouldn't that be great? I’m sure the players would get a kick out of it, and we'd feel the tension and enjoyment back home, too. We're basketball fans and these are the situations we live for as fans.

The NBA usually seems to get it. But on one of their marquee events they waste the opportunity and the NHL totally laps them. It's time the NBA based its All-Star Game and Weekend on the bit of wisdom that has helped basketball grow in the past and that makes it great today: