Ever had a really bad case of writer's block? I had one when I started this post. It was possibly the worst block of my life. I was unusually absent not just on here, but also on Twitter, Facebook, Tumblr, et cetera -- not by design, but because I quite literally couldn't write anything. I'd tweets and delete them for being too banal. I'd write Facebook status updates and balk at the ill-fitting verbiage. I'd try to write something for ANY of the sites I write for -- here, 48 Minutes of Hell, Goodspeed and Poe, etc. -- and it just ended up being unfit for editing. I'd delete it and start over, and kept deleting it until I'd spent hours at a keyboard with naught but a cute little phrase to show for it. That's where I was for quite some time. And it was incredibly frustrating. Breaking out of writer's block is a difficult task, partially because you keep illogically raising the bar for yourself. You may know the type. I kept telling myself "to make up for this block, I need to make sure my first piece back changes the game. It needs to be one of the greatest things I've ever written. Because if it isn't, I'm letting down the readers who took the time out of their day to read my work." And then you get the yips, and you can't write anything even remotely close to your expectations. The cycle continues.

So this was my best effort yet to wrest myself out of my block, back in the block. I went going back to the basics. The very basics. Today I'll examine the main reason -- in my view -- that the NBA produces such a wealth of fun narratives in every game and every season. In pursuit of this, I drew together a pyramid of examples to examine what makes team sports -- and specifically the NBA -- so easy to frame into entertaining narratives. To pare the pyramid to its essentials: there are seven basic levels of granularity by which you can analyze the NBA. The levels range from dynastic narratives -- spanning multiple years and a full career -- to possessional narratives -- spanning singular possessions on offense and defense between component players and teams. In between, we have five different levels of granularity. And there's a split in each level between stories centered on players and stories centered on teams. I've put together a graphical representation of these types of stories -- with examples -- and will be discussing them in full, level by level. Let's begin. 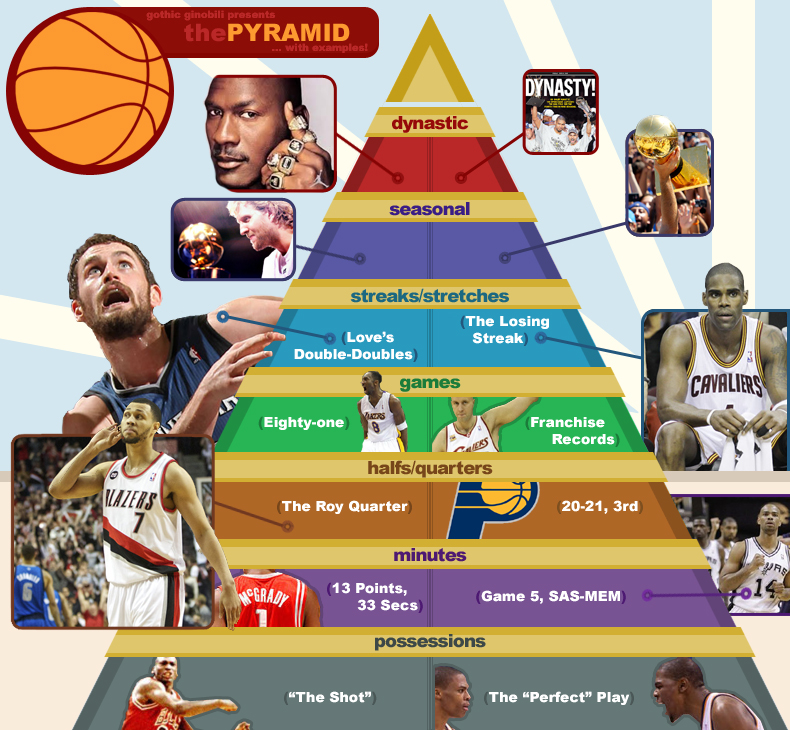 In a dynastic narrative, you examine an NBA story from the broadest possible view. That is, not on a single season, but on the accomplishments of a team as they go through a period marked primarily by either a single player or a single concept. Contrary to the general thought, a dynastic narrative need not be positive: you could make the argument that the 2000 Knicks are one of the stronger dynastic storylines of the last decade. They were defined by a single overriding personality in James Dolan, and the depths of their failure -- a decade without a playoff win despite being a taxpayer in 8/10 seasons -- is both memorable and virtually unprecedented. Looking at the NBA through a dynastic lens gets you to pieces like Dwyer's classic "Your Champs, in Your Eyes" piece on the appreciation of a dynasty, no matter when it may be. As I stated before, you can also look at each of these concepts through a singular player: for a lighter example, see John Krolik's "The Giving Z" for a demonstration of how you can look at a player's career without beating statistics over the head or obfuscating your point under mountains of excess words. (Example of that: everything I've ever written.)

Seasonal narratives are more common, though often less edifying. Most commonly one will find them in the form of season retrospectives -- team beat writers looking back on a long-fought season, or fans aggravated over their playoff exit leaving their keyboards bare as they excoriate their teams. And then there's the opposite pole: The team that actually wins the title. The player that put it all together a la 2011 LaMarcus Aldridge. The franchises that finally -- after trying so long -- get into the playoffs or get their first playoff win. A particularly compelling and memorable season retrospective for me was Silver Screen and Roll's 2011 retrospective following the Mavs sweep -- the format is memorable, the writing splendid, and the presentation worthy. On the player side, you have the Pinstriped Post singing songs about Dwight Howard's true value as a player after his MVP-worthy 2011 season.

While this is a somewhat rarer story in the world of NBA blogging, perhaps that's an oversight on our part. If you look at any particular game, chances are there are going to be some element of noteworthy streaks at play. The streaks may last seasons, like the Spurs winning their umpteenth-millionth game straight against the Clippers in San Antonio until this year's flop. There were, however, an abundance of stories about the Cavaliers' losing streak last year -- this alphabetical take from Truehoop was always my favorite. And from the player perspective, I was going to use a story on LeBron's various 2009 streaks, but this game recap I read a few hours ago that goes into Love's current streak of eye-popping numbers spoke to me, and I had to plop that down in here.

Essentially the gold standard of an NBA narrative. The recap. "How was the game?" Recaps don't have to be noteworthy to be a story, they simply have to conclude. I'm of the view that everyone should write a few recaps, but nobody should write more than 20-30. They're a bit creatively stagnant, usually, and they keep you mired in bad habits when you try to migrate to different levels of granularity, in my view. Still, my favorite aspect of the game narrative come in the form of recaps that go far beyond the facts of the game -- sure, team A beat team B, but what did it feel like? In terms of the AP recaps, I don't know if any of them can beat this late-2009 recap of a Wizards-Nets game. It pretty much has everything -- a nondescript game that demanded a larger story than just "Hyuck hyuck the Wizards won," a strange and disturbingly compelling storyline of a declawed Arenas, and a bunch of random details (the sunglasses Blatche wears in the locker room, Blatche discussing his work ethic, the fact that nobody but Blatche mentioned in this article is still on the Wizards just three years later, etc) that tie everything together. There are tons of excellent recaps among the blogs, as well. One of my favorites has always been this throwaway recap, primarily for the amazing title: "Lakers 99, Timberwolves 94: Lakers kidnapped, replaced by cardboard cutouts. Wolves still lose."

Guiding examples: The Pacers' brilliant 20-21 quarter versus the Nuggets in 2010, the Brandon Roy quarter, Melo's 33 points in a quarter.

These are somewhat interesting in that -- like streak stories -- they tend to be ignored in the postscript but entirely compelling as they happen. Part of what makes basketball a beautiful game is just that aspect of it, and the entire reason I wrote this piece in the first place. There are amazing NBA articles written about virtually every stage of the game process -- from the dynastic to the possessional -- and as well, when watching the games, you quickly realize that any basketball game can be infinitely differentiated into the sum of its component parts. Every possession can be compelling. Every sequence can bedazzle. Every quarter has its own story to tell, if you're looking hard enough. Or, if you wait long enough, you're bound to get a single-quarter or a single-half story that's simply sublime -- this particularly close-knit portrayal of Brandon Roy's miracle quarter is the defining example of this type of pyramid story.

Honestly, I don't think I can say anything that Joe Posnanski's piece on that last example doesn't demonstrate in full. At all. Just read it. That's what a minute/moment story should look like. That's how you write a story. Just look at it, now.

It's here that I have to stop and really think back to why I love the NBA -- and more than that, the sport of basketball -- so much.

I like baseball. I'm not a huge football fan, but I can see the attraction. Hockey is okay. But basketball stands alone, in my view, at allowing this kind of granularity. The narratives discussed above -- the game, the season, the dynasty -- all of those are truly applicable in any sport. But possessions? A possession is an infinitely differentiable conceptual puzzle piece, with a distinct beginning and ending, and a easily broken-up storyline all its own. That's special, and it's something you really only see in basketball. The offense versus the defense. The offensive player driving into the teeth of the defense. The pass, the cut, the jab step. Every little piece makes up a thread in the tapestry that defines a basic possession. Each possession, strung together, creates a minute. A minute strings to a quarter. A quarter to a game. A game to a streak. A streak to a season. A season to a dynasty.

Every aspect of basketball comes down to this -- a drama in one act, a possession where two tacticians move their sentient chess pieces and hope that nothing goes wrong. The stark calculus of the possession is probably the thing that I find the most fun, really -- a possession has a clearly delineated start, and a clearly delineated ending. In a way that no other sport but baseball really captures, the possession allows you to distill a free-flowing liquid game into a series of bite-size pieces. There's the knowledge that at any time, to enhance your knowledge of the game, you truly could take every possession of a basketball game and try to map out what's going on. In football, or soccer, or hockey... this isn't nearly as straightforward. It's as liquid or more, and as slippery to define. But a possession is a naturally occurring distinction. It's a definition that comes from the rules itself. Not all plays will be the Thunder's perfect play.

But in their own way, all possessions are different. Different defenders, different results, different tics. And it's in that ideal that basketball becomes beautiful. It's through this that a mere game takes on so many layers of differentiable brilliance, and in my view, what brings so many wonderful writers and thinkers into the analysis of the game we love to watch. The possession is the thing that drew me in, and continues to inspire me to write more. I can't say this piece itself broke me out of my writer's block, but it certainly reminded me why I love the game. And whether or not I can still write the 5 pieces a week I wrote last December (spoiler alert: probably not, though I needn't do that any longer), that's something we all need to do every once in a while.

In the end? I love basketball. That's why I write about it.