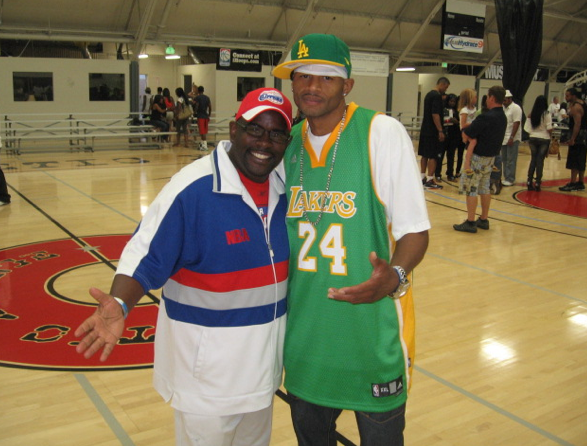 Who would honestly appreciate a "superfan" on a personal level? Let's say you're related to someone who calls himself the biggest fan of your team who has ever lived. Let's pretend he has a solid case, and is unreasonably obsessed with your team. Do you find yourself proud of the depth of his hobby? Or perhaps just sketched out by the general air of creepiness that pervades the most obsessive of fans? For my money, I've always thought that I'd probably be rather unimpressed if I was related to a superfan -- I'd certainly appreciate their ability to enjoy life and throw themselves full hog into their pet hobbies, but I don't think I'd be able to get past the obsessive tendencies and the other things they could be doing with their money. I don't think I'd really like a superfan in real life, if I had to spend too much time around them. On a personal level.

And that's sort of the key. As a concept rather than a person, I don't think you'd find a single sports fan who doesn't harbor a tincture of respect for the hardiest of diehards. We may -- and we often do -- laugh at other team's superfans. We don't understand why they do what they do. But at our team's games, somewhere in our cold and barren hearts, we find it in ourselves to root for the crazy person on the jumbotron who's painted their face with the logo and is wearing enough official team merchandise to feed a poor Ethiopian family for a months. We see them dancing on the screen and we feel the kinship wrought of what may very well be the only singular thing that connects us. When we see the superfan, we know we root for the same guys. They galvanize us into a semi-patriotic fury that only dies down when we've left the stadium and had some time to reflect on how absolutely silly sports is. But for that moment, the superfan is the MVP of the arena, and the MVP in the hearts of many fans.

And then you've got the Clippers!

Having read the Clippers' statement, I can partially see where they're coming from. The Clippers feel that Clipper Darrell's persona is ripping off the Clipper brand. That's not altogether wrong. They feel that Clipper Darrell does not represent their organization, and that in his manner of dress and presentation, he was allowing ambiguity that made people think he did. That's fair. They do not want people who aren't under their employ to be profiting off their brand, and they don't like having someone out there with the Clipper name that they can't really control. It all theoretically makes a ton of sense, and all seems rather par for the course. They even offered him a free season ticket (something they haven't to my knowledge offered him on a regular basis -- he's had a technically reserved seat, and it's had the same occasional upgrades most long-time season ticketholders are rewarded with after 10+ years. But like any season ticket holder, it appears he's paid for it.) if he'd cease and desist. They've done things by the book, finally. Right?

Well, no. There are three main points at which the perfectly logical case I presented absolutely falls apart. First, Darrell has been doing this for over a decade. If the Clippers really wanted him to quit it, why didn't they do something about it years ago? Why let it get to this point at all? The Clippers have never been opposed to having a fan drive around Los Angeles promoting the Clipper name in his quasi-insane, quasi-brilliant Clippermobile whose modifications cost $14,000 and 3 months of hard work on Darrell's part. The free publicity Darrell brings the franchise has a certain inherent advertising value that -- when there's no other positive aspects present to build up fan interest in a cellar-dwelling staple -- helps keep casual fans happy and occasionally drives a nice little human interest story that drums up a few ticket sales. The Clippers understood that, and had no problem cashing in on it when times were bad. The idea that they can now tell him to throw the car -- and the persona -- away because he's making a few more dollars on it is somewhat shocking. They reaped the benefits for the last few years, now he doesn't get to make a few bucks?

Which leads me to my second point, and the one that really infuriates me. Please look at this picture. 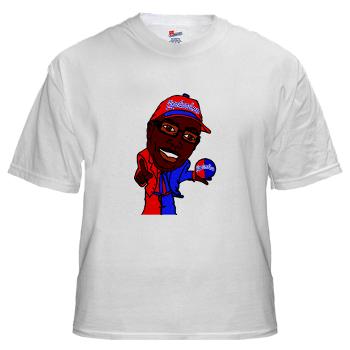 Are you seriously going to tell me that this shirt makes him money? REALLY? How many people honestly own this shirt? How many people would WANT to own this shirt? This is Ringo Starr MSPaint artwork with less taste. If Darrell wanted to make money, he probably would need to actually be providing merchandise that isn't absolutely atrocious. He'd also most likely need to be charging more than the absolute minimum for the shirts -- back in college I was on a dorm council that had to find a T-Shirt vendor that would sell individual dorm shirts. I quickly discovered that $15.00 a pop was about the best you could do if you intended to make a profit -- most vendors would take enough off the top that charging below around $13 dollars would generally mean you'd actually be subsidizing your tenants' shirts. He's charging $9.99 for this crummy, atrocious shirt -- which is still too much, but it's a fair sight under what he'd need to be charging to make selling T-Shirts profitable. Which leads to the question of how Darrell is making money at all. If he's making more than $100-$200 a month, I'd be shocked -- and this isn't money that the Clippers would be otherwise getting, because anyone who's obsessed with Darrell enough to buy his merchandise or hire him to speak at an event surely already spends more than enough on the Clippers. They aren't just going to replace "Clipper Darrell expenses" with "more Clippers gear." He's not INFRINGING on their profits, and even if he was, the scale of his profits is so absurdly small that it's the equivalent of losing a few quarters under your seat cushion and having your crazy uncle search the couch and take the money. Are you going to order him to leave the house and get mad at him for it? Probably not, because in the long run, a few cents in the couch is absolutely nothing compared to the money you make in a year. The general tenor of the Clippers' note indicates he has some kind of insane sponsorship deal -- that's fine, I suppose, and it's reasonable for the Clips to want to stop that. Or they could've gotten him to give them a cut, instead. Or... really, anything but what they did.

Which brings me to the third reason why I can't buy the logical case. Did you actually read that press release? I may be off the mark, but I think it may be the pettiest press release I have ever read in my life. This is an entire organization -- a hundred plus people -- literally releasing a screed questioning whether one of their biggest fans is "actually a fan." Clipper Darrell turned down a job offer from Mark Cuban to do the exact same thing for the Mavericks, while the Mavs were in the midst of deep playoff contention. Were he not a true fan, it would stand to reason that he'd take a job with unprecedented inside access and a wealthy, supportive owner doing something for a salary that he currently does while paying out the nose. You could make that leap. You could also find someone -- anyone -- to read your press releases before you send them out, just to make certain it doesn't come across as the most arrogant and farcical letter since Gilbert's post-decision screed. Actually, this is worse. At least Gilbert's screed was focused on someone in his stratosphere of wealth. This is the Clippers' organization picking on a random fan because -- god forbid -- the fan stuck with the franchise so long he became inextricably connected to the franchise and is making a few hundred a month selling awful T-Shirts at a small profit, doing charity events that make your franchise look better, and being silly and embarrassing for money. That's all.

It's often said that the most meaningful fiction is that which imitates life. In the case of the Clippers, it's the opposite, and it's more like life imitating farce. We could make all the jokes we want about Dan Gilbert for his letter, and he deserves them. But this bush league Clipper response to one of their most loyal fans is beyond farce, and beyond all the worst stereotypes and expectations we could've had for the franchise. It's all the worst stereotypes about the Clippers distilled into one easy to digest package. It's as if Sterling knows we forget he's an awful person. He realizes that the team is good enough he actually has to actively remind us of his flawed priorities and why the Clippers have been so dismal for the last decade. And while I may be overreacting, I don't really think of this as solely a reflection on Darrell. As I started the post with, if I knew Darrell in real life, I probably wouldn't like him that much. But it's the principle of the matter. It's how they went about it. And more than anything, it's the utterly incoherent standards by which they came to this decision now, of all times. The Clippers aren't a joke at this point. They're a premeditated farce that happens to be good at basketball.

If this is any indication, that's all Sterling really wants to be.