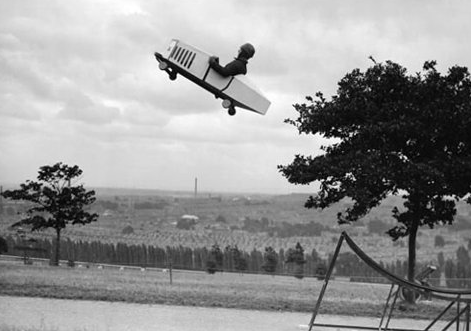 I spent a lot of time this weekend wondering why, exactly, March Madness captivates the nation. It's not an easy question, especially when you consider people like me. Context: I really don't like college basketball. Earnestly, honestly don't. Partly it's because I went to Duke. I didn't have the greatest undergraduate experience in the world, and my distaste for my school's administration and the overlying social schema of the university significantly tempered my enthusiasm for the basketball team. As did my general dislike of Coach Krzyzewski's style of coaching and Duke's occasionally-deserved poor reputation. Outside of Duke, I'm not really a fan of any college teams, and as I just outlined, my Duke fan credentials may be among the weakest out of any sports I actively follow.

And in terms of the actual play quality, March Madness (as with all college basketball) is lacking. There are a myriad of problems with the college game. There's the distastefully long shot clock, the uninteresting offensive strategies, the low talent level, the unnecessarily gimmicky contracted three point line, and the overall low intensity level compared to the best NBA games. The only thing that the college game really has over an NBA game is the crowd effect, but really, that doesn't at all impact how fun to watch a college game is, except perhaps in the last few minutes. Despite all this? I love the first four days of the NCAA tournament. I really do enjoy it. I find it captivating, and I can look past the college game's obvious flaws. If only for four days. But... why?

After some rumination, I think I've solved the puzzle.

Consider the concept of the bandwagon as applied to sports. Most people hate it. There are a rare few who accept being called a bandwagon fan, and it's used as a pejorative in casual sports talk. "Those damn bandwagon fans." ... "You became a Heat fan after they got LeBron? Bandwagoner." ... "You root for the Steelers, the Yankees, the Lakers, and Duke? I... what?" In sports, among hardcore fans, the bandwagon is synonymous with the negative. In my case, I actually met the person in the 3rd statement on the night Duke won the 2010 championship. It actually ended my night early, and had I not ran into a girl I was crushing on, I would've proceeded to wander all the way back to my dorm as I wondered when I started rooting for the same team as that guy. Yeesh. Suffice to say, the bandwagon is not a positive thing.

Which is not to say the theory of the bandwagon is a bad thing -- if you break from the prescriptions of fandom and the unstated mores of sports, there's a lot of comforting aspects about a bandwagon. Humans are inherently social creatures. In sports, the bond formed by one's rooting interests is strong -- meeting a fellow Indians fan at the airport is an immediate topic of discussion. Meeting a guy with a Kyrie t-shirt at a bar makes my day, and often even my week. Meeting fellow fans of your team is great. By rooting for a team with the largest bandwagon, you maximize the chances of having these bonds with random people. You have a higher probability of being able to find people to watch games with. You have a larger group of people to interact with on a fan-to-fan basis, and (given the general qualities that form a bandwagon) you probably have a significantly higher chance than most of "your team" winning a title and following an entertaining (read: winning) team in most sports. If the idea of being a bandwagon fan wasn't so stigmatized among the "real" fans, we'd probably all realize the odd logic of it from a social perspective.

Except we already do. We just don't admit it to ourselves, yet.

Enter the NCAA tournament. March Madness is an event that essentially demands a bandwagon. Have you ever heard of a sports fan who enjoys the tournament, but only watches games rooting for their team's rooting interests? Sure, I watch the tournament and hope for Duke to do well, but hell if I root for any other team based on my actual rooting interest. I root for close games, fun matchups, and the manna of everyone who watches the tournament: upsets from the underdog! Sure, you may know nothing whatsoever about the team you're rooting for. Hell, until Norfolk State beat Missouri this year, I had absolutely no idea that the school is in Virginia. In fact, it's only an hour or so from where I live, which is a good thing to know in terms of finding basketball in my non-NBA blessed area. But again: I knew nothing about Norfolk State beyond the number next to their name. That was it.

Did that prevent me from screaming my support? Not in the slightest. That's a bandwagon, though a thinly veiled one -- it's a bandwagon for the underdog. At any given moment, you can walk into a room of 20 people watching a game and expect that 19 of them -- like you -- know virtually nothing about the teams playing and are rooting for nothing more than the higher seed to pull the upset. When Ali Farokhmanesh canned his gigantic three pointer in 2010 to eliminate Kansas (a team that I still maintain was the best college team that year, by a rather large margin), there were scarce few around the nation who weren't cheering. "That's what March Madness is all about", they tell us. And they're right. March Madness is a chance for every sports fan in America to throw away the natural predisposition against the bandwagon and experience all the benefits of a bandwagon -- rooting without the pain of losses, the omnipresent bond of a common rooting interest, and the higher probability of being happy with the outcome -- without any of the stigma.

In this sense, March Madness allows sports fans to step out of their self-imposed shell. It allows us to -- for a week or two -- forget all that fandom teaches us about how wrong bandwagons are and participate in them whole hog. We can experience the feeling of rooting with abandon for teams we know virtually nothing about. We can feel that social bond felt by bandwagon fans who can walk into a bar and know that 9/10 casual fans will -- like them -- be happy to see their team's success. We can see and feel all these things, and we can do it without feeling the isolation that bandwagon fans feel when confronted with the hardcore obsessives in every sport. That's what March Madness does for me. And at the end of the day -- low quality basketball accepted -- there's something to be said about having that experience once a year. Pretention be damned. It's fun, harmless, and interesting in small doses. Emphasis on the "small", though. Because if I see another UConn-Butler game, I just might go postal. 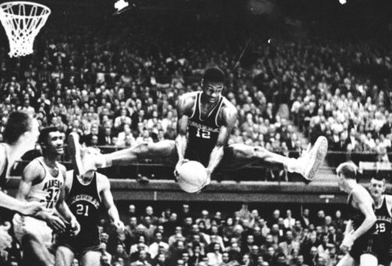