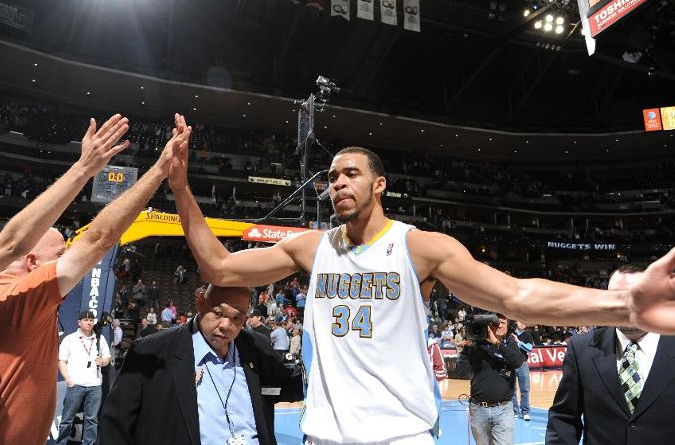 With no definite purpose, JaVale McGee stepped heavily upon the March snow that lined the Denver streets. He told his new teammates that he needed a day to himself, to look for houses and neighborhoods. But if you could just see his face -- could follow his gaze as it moved upward to the vague mountainous altitudes in the distance -- you'd never see a glance to a realtor's name or the height of a ceiling.

Now JaVale was walking along a smoothly paved sidewalk. As he walked along the perfectly smooth concrete, JaVale nevertheless felt no surprise at tripping slightly over his feet every fifty paces or so. That was custom for him. But on his brows were gratitude and shock. For despite all his customary tripping, he hadn't yet fallen and scraped his knees. This was something new.

Most professional athletes go into slumps and streaks every now and then. With the psychophysical obsession that drives them, generally these athletes organically develop conscious rituals. These rituals are designed to avoid changing or continuing their current luck. To put it one way: You don't change the deck chairs when you're hitting .500. You change them in every way possible when you're hitting .100. But the man walking wide-eyed through Denver - just as surely a professional athlete - knew nothing of these slumps and streaks. His lot was to be consistent, no matter his rituals or approach. A bulwark of consistently met expectations.

However, this consistency wasn't of the Duncan type. Without fail, McGee's consistency was peppered with short bouts of unaccountable mental clumsiness, clumsiness that called into question his effort, dedication, and intelligence -- all in one stroke of cosmic meanness. He knew about the endless reels of inexplicable athletic failure he'd exhibited, knew these highlights were replayed endlessly in the minds of every basketball fan. He knew his blooper reel on Youtube was more popular than his highlights. He knew his name lived in infamy in the press. It was why he'd been traded to the Denver Nuggets in the first place and why the national reaction to the trade consisted of exactly two responses: respect for what he could do (begrudging, rare) and mockery for what he couldn't (ubiquitous, universal).

But he hadn't tripped and fallen down yet since landing in Denver, for whatever reason. Maybe it was the light oxygen in the atmosphere, the knowledge that all would be forgiven if he could start anew. Maybe it was the fact that he had a supportive mother and teammates he could now compete with in a straightforward way on a team that truly competed. Maybe there was no reason, or God was saving some epic choke in a bank for every time he didn't fall. Whatever the case, JaVale didn't know, and -- like all athletes on their first good streak -- didn't particularly want to know. After all, as all athletes know intuitively, thinking about the luck is the first mistake of superstition and a guarantee that the luck will go away.

But whatever he did - for the rest of his life, at least in Denver - JaVale McGee could never shake that luck.

On the other side of the gravel pond, Nene felt a bit disgraced at being traded, at least when he was really honest with himself. Sure, there shouldn't be a lick of shame in being ousted from one of the deepest rosters in the league, especially since he'd been battling injury. But there was always a disgrace in being rejected by any team. The air felt heavy in the capital of the United States. And to the Washington Wizards? There were quite a few dysfunctional franchises out there, but only one aspired to comedy. To be traded for JaVale McGee, a man who had to beg for a triple-double, who had the mentality of a 12-year-old that could dunk? It was a disgrace, and a player of Nene's caliber was not having an easy time justifying the inexplicable trade.

But, he supposed, there was no sense asking why or how, or trying to change the past. After all, Nene knew how to play the game of basketball, and that knowledge - combined with effort and statistics - had always buoyed him through any temporary lapse in confidence. Nene had the gift of consistency - maybe not in a given minute, a given quarter, a given game, a given season - but he would always come back to that old brand, the brand of Nene. Denver would have to go wanting for that brand for the rest of its existence as a city and a franchise. He walked with firm conviction - note the broad shoulders framing the proud mane - past the Reflecting Pool, not even noticing it all that much. In fact, he noticed it just sparingly enough that he managed to trip and fall into the pool. He was unhurt, but shocked. He wouldn't be shocked by such occurrences in a few weeks, as he became sadly accustomed to the many causes and manifestations of the clumsiness that would haunt his frame forevermore. 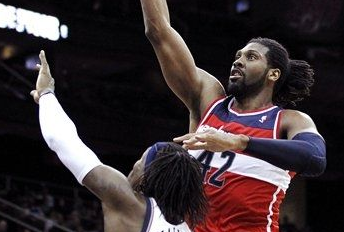