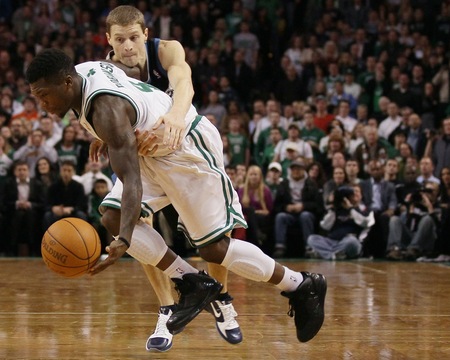 ESPN's Truehoop has had a strong few weeks. They've been rolling out an excellent ad-hoc series based around rule improvements and other game enhancements to the game of basketball that could make things better for the players and the fans, titled HoopIdea. Today, Adam will share his own idea to make the game better: ending the beneficial foul.

A series of good passes leaves a player wide open for a three. He catches the ball, rises, and hits the shot. But before that can happen, the refs blow the whistle, and the ref gives his team the ball out-of-bounds. You see, a reach-in foul on the floor a second earlier had stopped the play. It hadn't stop the passer, it hadn't stopped the play, but it was a foul nonetheless. Sometimes the fouled team gets an extra free throw, but usually this kind of foul ends with a side-out and nothing else.

Later, in the same game, a big man catches the ball near the rim. He goes up, only to be pummeled. The player sighs loudly going to the free throw line. After all, he hates shooting free throws. And as two shots clank off the rim, the opposing coach applauds his player, while the announcers swoon about how good a foul that was. The fouled team loses the game by two points, two points that they could've spared had their big man not been forced to shoot pressure free throws. Do you know any other sport where breaking the rules, committing a foul actually benefits a team? Where a foul is a strategic device rather than a mistake with grave consequences? I don't. I propose that basketball shouldn't be such a sport either. What's more, the changes couldn't be easier to make.

Let's sketch out the two major situations, and how I'd tweak the rules.

Late-game fouling: The most egregious example of beneficial fouls. You see it in almost every close game. A team is losing, the opposition has the ball, the clock is running out. Instead of taking the loss, the other team fouls, allowing it to get the ball back. The other team may even hit both free throws, but a lucky three (or a lucky and-one) can bring them right back to the game. And if the winning team misses their free throws? Overtime might be around the corner. Why are we allowing the losing team to benefit from breaking the rules? I've heard people suggest three foul shots for reach-in fouls committed outside the three point line in the bonus and such, but that doesn't change the main issue: Fouls and free throws are suddenly more important than having played 47 minutes and being down 5.

Why not just allow the coach of the fouled team choose what he wants his players to do? Free throws? Fine, go ahead, your choice. An out of bounds play? Sure, and the fouled player should even choose where he wants to take it out of bounds. Would you want to play Hack-a-Dwight, or in fact, foul Dwight on shots at all if it meant the possibility of a out-of-bounds play run from the baseline? These plays are high percentage, and pretty deadly if drawn up right, you know. They don't stop the clock either, which makes the whole concept of the intentional foul as pointless as committing fouls should be.

Reach-ins to stop a sure basket: There are two obvious situations in which this happens: on the fast break (when somebody's barely ahead of the play on defense which saves the open path to the basket), and a reach-in foul that just happens to stop an easy three pointer. There are plays in which players get easy baskets after a foul is committed on the passer. The ball is stopped, the foul might just save 2 points. There are plays where a big man gets an easy putback of a miss caused by a foul. The fouled player might miss some foul shots, shots that he wouldn't have to miss have the refs let the play develop before blowing on the whistle.

Soccer has a neat solution: if a foul is committed and the fouled team keeps the ball moving, the referee usually gives advantage and lets the play flow. In hockey, when a penalty is called, play isn't stopped until the other team gains possession of the puck. But in basketball all we have is a rather loosely defined continuation rule, and nothing else. Why not let the putback happen? Why not let the fast break continue? Why let the opposition benefit from fouling? It's so easy to change the rules so that the ref can swallow his whistle and let the play unfold before he decides to stop it.

These fouls are annoying, break the flow of the game, and don't belong in basketball. It's easy to create rules that don't benefit the felon, and yet (as it stands) the NBA doesn't seem to realize that the game is way more exciting when the players are trying to make plays, instead of fouling everything that moves. How many games have been lost because of Hack-a-Big-Guys? How many points and highlights have been wasted because of off-ball touch fouls? How many times have announcers said "I like that foul"? How many fast break dunks have we missed because of almost-clear-path fouls? The truth it doesn't really matter how many times these things happen, considering the current alternative is a disruption in flow at crucial points in the game, an awkward strategic relic, and a more stilted product. I admit there are strategic end-game situations that would be essentially eliminated and in the beginning the game might flow very differently at times. But I'd argue that it's worth it to create a more entertaining, more compelling sport.