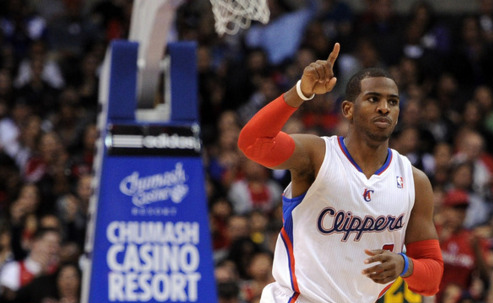 One of the many tiny, awesome moments in this NBA season came when a team was making intentional off-the-ball fouls on DeAndre Jordan. It was one of those all too familiar "Hack-A-Shaq" moments where everyone stopped and shrugged their shoulders. The announcers slyly analyzed the strategy and talked about the free throw shooter's form and psychology. The audience grimaced at the spectacle. But -- meeting a dismal wall with a force of light -- Chris Paul used this moment to out-think the universe. See, just as the intentional foul on Jordan occurred, Chris Paul (manning the point and far beyond the top of the key) shot an insane, improbable 40-footer. Do I even need to specify? It was good.

I love that. I mean, I've watched a lot of basketball and I'd never seen that, at least when the foul was so blatantly intentional. In one stroke CP3, a preternaturally cerebral and gifted player, used his fantastic shooting ability to more than neutralize -- to actively punish -- the absurdity of Hack-A-Shaq with an equally absurd rejoinder. Unfortunately, the officials -- probably with the same puzzlement as everyone else -- didn't give Paul the benefit of a four-point play for his teammate to finish and Jordan simply went to the line. I'm pretty sure the sheer novelty of Paul's actions were the only reason they didn't get an and-one. In any case, every off-ball foul I've ever seen that was called during a made basket has led to an and-one. This one didn't. But the silent rebellion of a superstar against the most commonly dismal strategic ploy in the book remained.

Paul had taken advantage of his great knowledge of the game and had applied it in an unfamiliar, almost completely unprecedented setting. It was so clever that to me it evoked other masterstrokes of strategy such as Paul Westphal's intentional technical, Ricky Rubio's inbounds delay, the creative invention of the dribble, the Eurostep, the cross-over dribbles and variations, small ball, and so many other great facets of our great game.

Of course, on the other hand, you could also frame Paul's move as the kind of bend-not-break mentality that has also led to unsavory outcomes like flopping (himself a great practitioner of the dark arts), working over the refs (again, one of Paul's favorite domain), and the Hack-A-Shaq strategy Paul was responding to in the first place. Much of what we dislike about NBA basketball (say, absurd free throw attempts, superstar calls, inconsistent officiating, make-up calls, rip-through fouls until recently) is partially explained by the rational approach of innovators to rules with perverse incentives, even if the rules themselves are the structure needed to create the innovative improvisation that makes basketball great in the first place.

Gamesmanship is a double-edged sword, and nowhere is this illustrated better than in basketball. Since the HoopIdea project has focused on flopping and tanking above all else, I thought it would be well to talk about flopping in the general language of gamesmanship that produces it, to see if we can't get some meaningful insights.

If you accept this, and you further accept that the officiating crew is inevitably fallible and inferring intent to flop is incredibly difficult (no matter how obvious you may think it at the time) and the overhead of implementing more officials is both prohibitive and deleterious to the sport... you also begin to accept the fact that flopping is absolutely inevitable. Basketball has a complex rulebook which, while not especially hard-to-understand, opens the door for subtle bending of the rules and of the officiating. There will always be workarounds to every earnest attempt (attempts that have been mostly successful) to make the sport as much about pure basketball competition as possible.

That said, there's absolutely no reason the rip-through has to be a foul on the defender, and as we've seen, the NBA found that rip-throughs had no real benefit to its style of play and only mediocre-to-worse consequences. In other words, the NBA solved for pattern and navigated the perverse incentives, and at the end of the day realized that what is not inevitable is calling a rip-through as a foul. Yes, flopping is inevitable, and I'm sure there's some complicated tree-branch metaphor between basketball, gamesmanship, and flopping where we can't cut flopping because it's not on our property or we'd have to cut the whole tree down or if we cut it off the tree would no longer produce delicious oranges (like Chris Paul) or something. But this rule change has shown that we can successfully prune flopping of its most unsightly boughs.

That's a modest goal, but like the decades of legal scholars pushing for modest goals, we must be prepared to accept that we may not be able to solve many of the problems we raise without making sacrifices, and that the truly pertinent problems may have to develop into obvious wrongs before we can in good conscience correct them. When the strategic blights on the game we aim to correct are also strategic innovations from some of the sport's brightest lights, truly separating the two and addressing the problem is at best tricky and -- at worst -- virtually impossible. 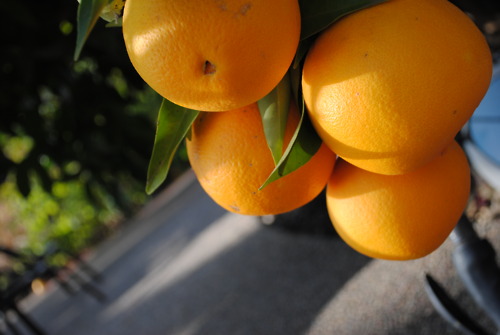