EDIT: _Call off the dogs. Matt was able to recover everything after a lot of hard work. We can stop cache-hunting now -- although I have to state that I'm pretty impressed we were able to collect over 525 posts in the email inbox of our cache-dump email account. Excellent crowdsourcing. Sorry it ended up being unnecessary, but had the website been unable to be recovered, it was pretty important that we get things from the cache before the caches expired. Thanks to everyone who was a part of this, and my apologies for anyone who feels it was a waste of time.___

I woke up today and went to Hardwood Paroxysm, intending to look up an old piece I read every now and then for inspiration. Imagine my surprise when I found, well... nothing. I immediately checked Twitter and heard the news -- server got hacked, entire blog was deleted, things looked grim. Very sad story. I've actually had limited experience trying to recover lost websites before. Specifically, I had a forum I ran in high school whose website was unexpectedly wiped. We tried to save as many posts as we could, but we didn't get much. Most of it (including the tales of Spiderdude, a bro-ified Spiderman knock-off that only a high schooler like me would find funny) was lost to the endless ether of the internet. In trying to recover everything, though, I became at least a little more knowledgable in figuring out how to go about recovering a site when the server-side data unexpectedly vanishes. To the uninitiated, here are two key points to keep in mind.

Why is this relevant? We can still backup Hardwood Paroxysm. There are two ways we can do this -- either through sifting through the RSS feeds of people who don't delete old articles, or by downloading articles based on cache data. I've already started the second process, but given the incredible amount of material amassed by the Hardwood Paroxysm crew, there's absolutely no way I can do it alone. And that's where you come in. After the jump, I outline the ways that you can help save Hardwood Paroxysm's archives and preserve the content of one of the best basketball blogs to ever grace the web. Let's get to it.

From my local drive, I was able to save many of the key style elements from HP's page -- the logo, the CSS stylesheets, et cetera. I also was able to save the text of HP's last 10 posts, which is good, because most caches don't seem to have them. When thinking about how to best organize the task of sifting through caches for over a thousand posts, I came across what I think is a relatively good structure for backing up HP before the content churns out of the cache. We start by searching the Google cache for specific HP authors, crowdsourcing the task to one or two authors per person so that work isn't duplicated. We can collect the document text by copying the cached page text into emails and sending them to an email account set up specifically to take old HP articles, so they're saved in a place we know they won't vanish any time soon. Then we can turn the archives over to the HP writers so they can undertake the task of repopulating the blog with content. That may have been a bit hard to follow, so here's an easier to follow instruction manual:

Here is an incomplete list of Hardwood Paroxysm authors, provided to me by Matt Moore in no particular order. Italicized authors are ones whose work is already backed up:

Please comment on this post with your name and the name of an author, if you'd like to take the task of helping to back up their work. We'll put your name here, so that nobody else duplicates your work in getting their articles back. Once you've got an author, move on to Step 2.

STEP 2: LOOK UP THEIR WORK

Go to Google and search for the following string:

This should bring up several pages of results, with each of their posts on Hardwood Paroxysm.

So, you have a list of articles. By hovering over the article link, you'll get a menu on the right side of the screen with a screenshot of what the article once looked like and a link that reads "Cached". Click the link. You may notice that it takes a long time to load -- if that's the case, just click through to the text-only version, which'll be in the right corner of the box on the top of the screen. Like this: 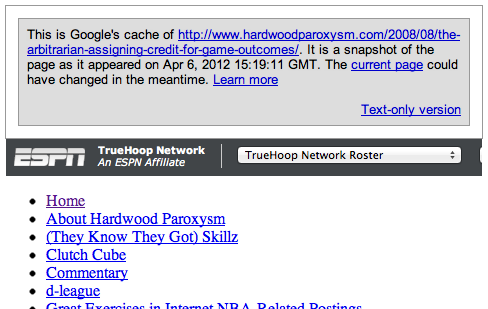 This is the important part. Copy the text of the article -- including the title, author, and date-stamp -- into your email program. Then send it to savehp@gothicginobili.com, with the email titled as so:

Then go back to the original google search from step two, go to their next article, and repeat.

It's a tedious, mind-numbing process. But it's probably the easiest and most organized way to get HP's content stored before it gets churned out from the cache. If anyone has better ideas, I'd definitely be up for editing this post or altering the strategy. But I thought it'd be good to start something now, before articles start dropping like flies and the cache gets emptied. It's all at our fingertips right now, if we can organize enough and get it before it goes. This whole thing sucks, but hopefully we can minimize the damage and recover as much as we can. Good luck, campers.