As advertised in our Prognosti-ranking series, we’re bringing our formerly retired series of daily vignettes — titled “The Outlet” — back for the playoffs. “Don’t call it a comeback.” Though, you can call it series 2, as we are in the title. Every day, we’ll try to share two or three short vignettes from our collective of writers ruminating on the previous day’s (or weekend’s) events. In this case, the previous few days. Should be a fun time. Today’s Outlet covers primarily Amare Stoudemire's hand injury, and includes the following two pieces.

A distinctly punch-drunk theme, today. Continue at your own risk. If you're made of glass, that is. Which does beg the question: how are we going to save Amare... from himself? (That was a Bad Joke. I should feel Bad. And I do.)

All is Well, All is Good
Adam Koscielak

The reports came in last night. “After their crushing game 2 defeat, Amar’e punched a fire extinguisher” ... “Amar’e bleeding all over the place, because he punched straight through the glass casing” ... “Amar’e surrounded by security and paramedics, getting stitches now." In response, the non-reporters tweeted a collective “What?”

And somehow, it just fits. It just fits so effing perfectly.

Of all the losing teams out here, the Knicks, a team that honestly has no business even pretending they can compete with the Heat in a seven game series (and I say this as an optimistically joyous believer in the chaos theory of sports miracles) are the ones frustrated to the point of PUNCHING A GLASS CASING. Perhaps this is the epitome of the Knicks season somehow. The high point, somehow. It’s really all hindsight, ifs and buts, and pure insanity.

From Linsanity to Pringleburnia, the Knickerbockers have been going from great to bad, intense to lazy, all while the New York Media Big Brothers are staring and passing judgements. And as STAT is surrounded by paramedics you can’t help to think that it fits. Delusional fans will have an(other) excuse and a scapegoat, the media will have the producer of the casing and the details of the lawsuit, bloggers will have another meme, all will be well in the world, and the evil Heat empire will bask in another power forward attempting to physically harm an inanimate object because of their dominance. 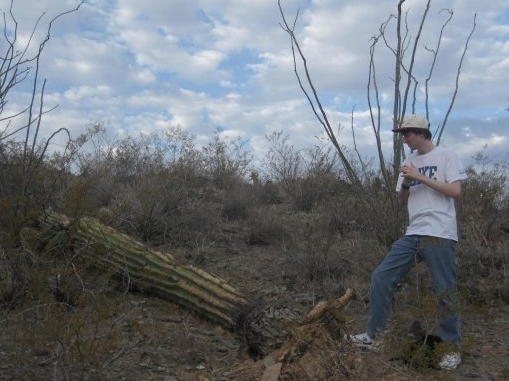 Wow, no it's not. I Punched a Cactus Once.

I disagree completely, Adam. All is not well. Though perhaps that's just my background obscuring my vision. You see, dear readers, I am a man that has made mistakes in my life. And I may understand more than just about anyone what Amare is feeling right now. This is because -- when I was 13 years old -- I punched a cactus in a bout of misguided fury at a less-than-stellar Biology test. I'd studied and studied, and done my best. Didn't matter. I came short of passing, by just a few points. In the interests of helping our readers understand how the flying fuck a person could make such a stupid decision (as well as solidarity for Amare Stoudemire), I have produced from memory a retro-liveblog of my own incredible punching exploits. Proceed with caution.

12:32 -- School is out, and we got out quite early that day. I am walking home with my friend Jean. We are discussing my failure to secure a passing grade on my latest Biology test. My parents had been pushing me to finish the semester strong. I at that point had a C in Biology and a few Bs as a freshman. The weight of failed expectations bubbled up. I felt impotent dissatisfaction in my throat.

12:35 -- "Damnit, Jean, I'm angry enough I could punch someone." Jean looks around. He is the only person present. After declaring that he was quote-unquote "not it" he suggested I find something of the non-human type to punch. I like animals, so the passing pigeon was a no-go. As a joke, he points out the cactus right ahead that we pass on our way home every day. Hmm...

12:36 -- "Yeah, I'm going for it." ... "Wait, what?" Before I can respond, I throw my fist at the cactus in feckless rage. Time seems to slow as I realize the sad and unreasonable truth. This was a remarkably bad idea. I slow my hand as it approached the cacti, but it was all too late. As a note of ultimate irony, the test I almost passed had ironically been about the biology of plants. Being that we lived in the desert, cacti played a big role in our studies. This was no ordinary cactus. I should have realized it. This was a jumping cactus. Welp. I'm fucked.

12:37 -- I somehow manage to slow my hand to a gentle love-tap by the time I reach the cactus. Really doesn't matter. After all, it's one of the dreaded jumping cacti. (They exist. Really.) The second I tapped it, the entire fucking limb jumped off and lodged itself into my balled up fist. Because that's actually how those things work. Jean stares at me for what seems like a minute. I stand there staring at my hand, which is now home to a medium-size limb ejected clean off the cactus. Instead of making any notice of pain (Jean was and is 5 years my senior, and I felt as though it was my duty to appear as Kid Badass) I start laughing. This -- contrary to my deepest expectations -- does not make Jean join in, and instead makes him stare at me as though I have gone completely nuts. I realize this is a preeminent possibility, note it, and continue laughing. He asks if we can stop laughing and keep walking. "Yeah, man. Walking. I love that shit." I am Kid Badass. I am the king of the Jungle. Wait, I live in Arizona. I've never even seen a jungle. Fuck.

12:42 -- We pass by a little league game taking place in the local park. In an effort to amuse myself, I wave my cactus limb'd fist at the umpire. He stares at me and gets hit in the chest by an errant swing. I laugh, accidentally managing to get the cactus limb stuck on my shirt. Oh god damnit why did I do that.

12:47 -- A senior citizen is walking his dog, and trying hard to pay no attention to the dumb kid with a cactus in his hand. I nod at the dog, and narrow my gaze. I am superior, Mutt. I have a cactus in my hand, and you do not. This is my day. I am Kid Badass. Vacate my sight. The dog barks at me and I jump in a start, getting one of the spines stuck past my shirt and painfully into my chest. Oh for the love of God are you kidding me right now.

12:54 -- We reach Jean's house. There are maids about, all of whom are staring quizzically at the all-too-obvious result of my impromptu fisticuffs. I begin the careful process of extracting the cactus limb from my hand with all the care of a retired bouncer, indiscriminately rending it from my shirt (and, more painfully, my chest), tearing exactly four holes in the shirt and a small patch of skin off my chest. "That could've gone better." I ask Jean for a swiss army knife, because those are useful. "We don't have one. I do have these scissors we use to cut cereal boxes open with though." ... "That'll do, I guess?"

1:29 -- After about 30 minutes, I finally have carefully extricated the limb from my hand. I cut off the limb proper, deposit it on the ground, and take each remaining spine out of my hand with tweezers. Shockingly, there was very little blood -- sometimes it pays to have poor circulation and extremely bony hands. I am not done being a moron, though, because in my pride at finishing I proceeded to pick up the cactus with my other hand and throw it into the trash can like a basketball. I made the bank shot, before realizing the cactus husk had left its last three spines in my other hand and completely covered it with smaller splintered spines. Apparently Kid Badass is another word for "total fucking idiot."

1:45 -- I return home, play it cool, and pretend like nothing ever happened. I spend the next month with cactus splinters all over both hands and strange prickly scars on my right hand. I tell nobody, because why would I do a thing like that.

So, long story short, I feel for Amare. That's what I'm saying here. Sometimes otherwise smart people make stupid decisions. Sometimes, these stupid decisions are not your garden-variety "wow, I did a stupid thing" decisions, they're incredible stories that will forever remind you of how much of a bloody moron you were, for at least one ephemeral moment in time. Today, it was Amare having one of those moments. On April 24th, 2004? It was a 13 year old Aaron McGuire, showing beef with cacti and picking fights over an insignificant Biology test. So, I hear you, Amare. I hear you deeply. I feel the struggle. Get well soon. And... despite everything I just said, for the love of fuck, stop punching things. From one Kid Badass to another, it's not a good look.

That's all for now. Join us later today or early tomorrow for the next installment of our Outlet feature, a piece from Alex, and the final picks from our Prognosti-Ranking series. Should be a barnburner. Adios, folks.