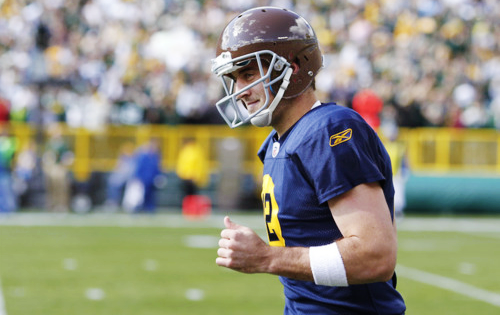 So, according to our friends at Public Policy Polling, Aaron Rodgers has a 89% approval rating in Wisconsin, to go with a 4% disapproval rating and 7% having no opinion. These are, according to them, the best favorability numbers they've gotten in any poll they've ever conducted. As a statistician I don't find that particularly hard to fathom -- Aaron Rodgers has the ideal mix of being a franchise cornerstone coming off a magical season and unexpected playoff run in the most popular sport in America. He's nice, nonconfrontational, and beloved.

The poll did raise the question with me, though -- what athletes would match it? That is, are there any athletes on earth with Rodgers' combination of widespread love and widespread knowledge? That is -- anybody with 90%+ approval and 7% or less nonresponse. Given how relatively neat and simple the line seems to be, I shall hereby refer to it as "the Rodgers test." It is the test of an athlete so beloved and well-known that they could outpoll God in their sphere of influence. But what's a test without some cold hard facts? For your consumption, I revved up the Poll-O-Matic 3000 and decided to pose the question with the power of instant and unbelievably accurate polling -- could any random athletes who came to mind beat Aaron Rodgers? My brilliant, groundbreaking, publishing-quality results follow.

Disclaimer: None of these are real polls. At all. They are canon, though.