To bring our playoff coverage up, we’re bringing our formerly retired series of daily vignettes — titled “The Outlet” — back for the playoffs. “Don’t call it a comeback.” Though, you can call it series 2, as we are in the title. Every day (or, rather, every day we aren’t doing a larger and grander piece), we’ll try to share two or three short vignettes from our collective of writers ruminating on the previous day’s events. Should be a fun time. Today’s Outlet has one of the longest pieces we've used for this series in a while, with Alex ruminating on the Nuggets' elimination to the tune of Sorkin's ultimate masterpiece, "Two Cathedrals." 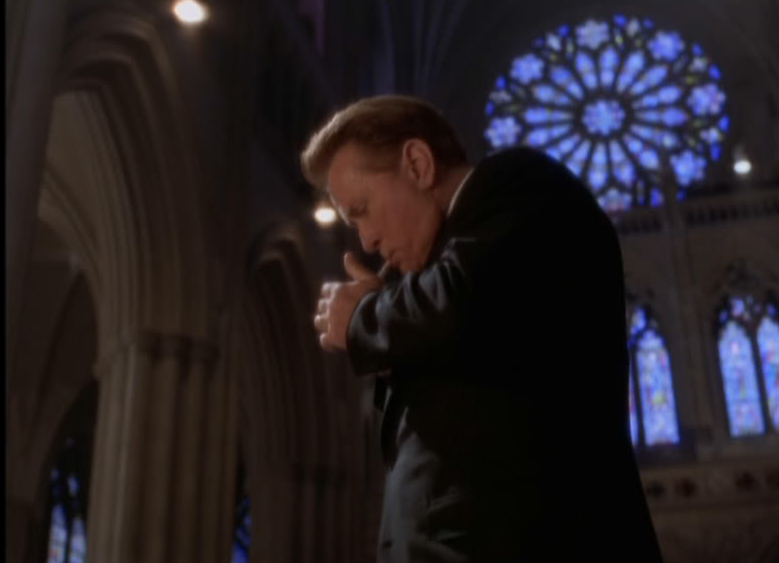 You ever see that masterful West Wing episode "Two Cathedrals"? Well, I got to thinking of it as I watched Game 7 of the Nuggets-Lakers last night. The episode - for those unfortunate souls who haven't seen it - carefully sketches out young Jed Bartlet's friendship with Dolores Landingham at a Dead Poets Society-type prep school. Jed, of course, would become the president one day, but it takes a wake-up call from new secretary Landingham to send his intelligent, compassionate character into a life of public engagement. Meanwhile, in the present, Mrs. Landingham (now Jed's longtime secretary) has recently died, having been senselessly hit by a drunk driver. And Now-President Bartlet -- attacked on every side, personal, emotional, professional, physical -- is doubting whether he should continue his career and seek a difficult second term. After Mrs. Landingham's funeral, Bartlet tells the Secret Service to seal the cathedral, so that he can give God a piece of his mind.

"She bought her first new car and you hit her with a drunk driver. What, was that supposed to be funny? "You can't conceive, nor can I, the appalling strangeness of the mercy of God," says Graham Greene. I don't know who's ass he was kissing there 'cause I think you're just vindictive. What was Josh Lyman? A warning shot? That was my son. What did I ever do to yours but praise his glory and praise his name? There's a tropical storm that's gaining speed and power. They say we haven't had a storm this bad since you took out that tender ship of mine in the north Atlantic last year..."

Bartlet's anger builds and builds until finally, feeling totally betrayed by a God he'd lived to serve, Bartlet shouts some blasphemies in Latin and tops it with an emphatic: "You get Hoynes!" This is the ultimate blasphemy, giving way for his dismal, cynical rival (Vice President Hoynes) to receive the nomination, effectively ending Bartlet's future political intentions.

The Gasol-Kobe-Bynum Lakers are there to break your hearts, to make you blaspheme against the Basketball Gods. Again and again, these Lakers will kill your favorite and your second-favorite team and send your most intense and enigmatic players to the locker room feeling like they had a chance. You will learn to root against these Lakers by virtue of the character and intensity of the other teams they inevitably face. But to the victors go the spoils, as they say, and for all the talk of their dogging it in this series, they clearly did have a few spare bullets in their chamber. Once again the strength of their game has justified their own perennial boast to relevance. No one has beat them four times in a series this season and it really doesn't matter that the Nuggets thrice refused them. That's how a seven-game series works, and more power to them if they can do it their way.

Their way or not, though, I get a naive and vulnerable feeling sometimes. Too often it's when I watch the Lakers or the Heat enact their prescriptive doomsday against some wonderful, joyful team doomed to fail. Like these Nuggets. These Lakers in particular make you question again and again just what it is we're all doing watching a game where the catty, drama-laden forum blue and gold can simply use teams like this as their personal scratching post solely and shamelessly coast through a series on account of their natural advantage. "You get Hoynes!" I actually tweeted this during the game, when the Nuggets' deficit was at its most dire. The dismal march of the Laker machine churns onward, and with it the remarkable joy that watching the Nuggets brought me.

But remembering "Two Cathedrals" also made me stop and reconsider. At his low point, after he's decided to concede the nomination to Hoynes, Bartlet utters ruefully to his wife that "the world can rest easy." The moment is shocking in the context of the series, even beyond the cursing of God (which is at least active and assertive). It's something as bad as death when you've given up hope. And when you look at the emotional arc of "Two Cathedrals," hope is the real problem of the episode, not the cliffhanger of whether Bartlet will run again or whether we'll give our goals another try.

And so the climax of the episode isn't Bartlet deciding to run again: It's Barlet (thanks to an apparition of Mrs. Landingham) recognizing where he came from and recognizing who he is: a flawed, occasionally impulsive, decisive, compassionate public servant that will stand up again and again for what he believes in. What matters is that Bartlet has regained hope. For all his weaknesses, he can always rely on his virtues and experience to keep hammering away against the problems of the world as long as he can draw breath. And he can always have the solemn faith that maybe, one day, some of these problems will break forever. Once that's established, the outcome of the political story is an obvious, meaningless afterthought. After a long motorcade ride set to Dire Straits' "Brothers in Arms," the president enters the press room and takes the hardest question first: Will you be seeking re-election, Mr. President? Bartlett's actor Martin Sheen - in one of my favorite moments in all of television - wordlessly answers with a posture of hope and affirmation. Roll credits.

Because of the appearance of Metta World Peace for Game 7, George Karl felt averse to using the Nuggets signature smallball backcourt of Ty Lawson and Andre Miller. But down 16 in the third, Karl realized he had nothing to lose and sent in Miller at the middle of the third quarter. Before the inevitable run that ensued, the run that put the Nuggets up 4 but still kept a Denver victory well out of reach, I muted Steve Kerr and Marv Albert, turned off my other monitor, and cut the lights in my apartment. Well, all the lights save for the light from two cathedrals in the backcourt, perhaps never to play again together. I played an apt song for the occasion: "Brothers in Arms." It was impulsive and superstitious on my part, but I don't know that I'll ever forget 'Dre Miller and Ty Lawson getting the Nuggets back into their unique brand of steal-and-rebound-and-transition, if only for a few glorious minutes of game time.