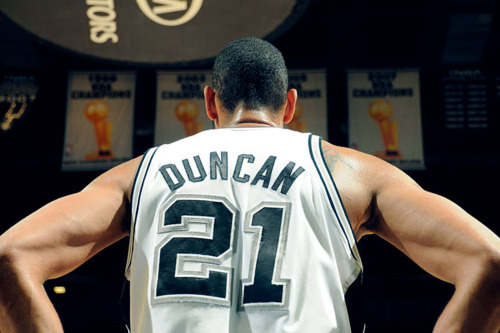 Today, Chris Ballard dropped one of the greatest profiles I've ever had the pleasure of reading. Twenty-one facts and anecdotes about one Timothy Theodore Duncan, written in Ballard's incomparable form. Beyond Joe Posnanski, I'm not sure there's a man in the business right now with writing as joyous as Ballard's. I don't mean that lightly. The profile stirred a lot of long-standing pride and wonder I've had at Duncan's career. Which got me thinking. In this post, I'll share a perspective you might not be expecting from a Spurs fan. I love Tim Duncan. But after years of sniping at friends for their incomprehensible loathing of Tim's game, I've realized that in my dismay over our difference in opinion, I've been derelict in the imitation of the ideal I defend. At this point, I know where I stand. I know where they stand. I love Tim Duncan -- as a person, as a baller, and as an institution. Many don't like him, or don't care, or find him boring. And at this point? I really couldn't care less if they -- or you -- give a damn.

Look. I'll be straight with you. Put my bias on the table, once and for all. Tim Duncan is my favorite player. Not simply in the game today, not simply on the Spurs. I've never rooted for a player's success or a player's legacy the way I've rooted for Duncan. I've gotten into an untold number of arguments over where Duncan stands historically. Yes, readers. I think he's the best player of the last decade. Yes, I think he's better than Kobe, and one of the 7 best players to ever play the game. Yes, I realize my opinion (while backed up by statistics, intuition, and results) is remarkably subjective and remarkably skewed. If there's one person in the world I'd stretch my data to accommodate, it's probably Duncan.

But there's something you learn growing up. Or, at least, attempt to learn. Not everyone agrees with you. Perspectives, experiences, and the changing cauldron of perception lead everyone to wildly differing views on... well... pretty much everything. I wasn't always okay with it. Nobody is. Tell me, who here hasn't gotten embroiled in a feckless political debate only to realize 30 minutes too late that your guiding principles are completely different? Who hasn't argued in favor of their favorite sports team to a fan of your greatest rival (to, obviously, no avail)? Who hasn't argued for an issue they feel is a completely done deal, and an open and shut case... only to face a person who is completely and utterly bought in to your opinion's inverse? You get irritated, annoyed, and insistent that you must be right. You call them stupid. You preen and rhetorically claw at their views. You need to argue your case, show them the true way of things. How often does that work out, really?

Realize this. People find the Spurs boring. They've found the Spurs boring for years -- the Spurs have had 15 years to spread their brand to the NBA, and fans simply don't appear to like it very much. Outside of San Antonio, anyway. Because the Spurs have the highest local ratings in the league, and their local TV presence is historically deep -- for ANY team, not just a small market. But outside of San Antonio? No, there are no Duncan jerseys hanging in bars. No Adidas commercials featuring Duncan giving a beluga the high five. Little hype, little fan presence, little love. We as basketball analysts complain, and cry foul. "Watch the games!" we cry. "The crisp passing, the flawless execution -- their offense is sublime! Their defense is beautiful! This team is everything you want to watch!" We pound our fists and cry to the heavens and argue til our faces are beet red. We try in vain to convince our friends and followers that the Spurs aren't boring. That being bored of the Spurs is inherently wrong.

I love Tim Duncan. And at this point, I've realized something. It doesn't matter to me whether you do or not. You can find the Spurs boring. I don't. It's a subjective call -- the entire concept of boring depends on what you like to watch. I like beautiful basketball, and value the aesthetics of my team's game. I like watching properly executed offensive sets. I enjoy watching Popovich run his magic. And Duncan, well. I've always thought his defensive dominance is the closest thing to an impressionist painting you can find in the NBA. Watching him move off screens, help off a weak offensive player, front the post -- there's no defensive skill that Duncan couldn't excel in, during his prime, and there wasn't a single player who could consistently outsmart him on the block. Not Shaq, not Dwight, not anyone. As he ages, things fall off -- but the flashes, those moments where Duncan outsmarts his body's age and functions on a higher plane than he should logistically be able to? Those still happen. They're still amazing, and they're still a thing to cherish... to me, at least.

And that's the key. "If you watch basketball like me." Because in the end, there is no platonic ideal for what a fan should value from their team. Many NBAniks would love to think that every fan wants to watch the aesthetically best team. We'd love to think that the quality of the basketball played actually matters to everyone watching. But that's not the case. Never was, and never will be. Fans like what they like. Some like dunks. Some like superstar calls and clutch free throws and disgustingly poor isolations. From an aesthetic perspective -- the one behind fans who run sites with micro-analysis as exacting as the NBA Playbook, or Hardwood Paroxysm, or any of the possession by possession folks at Truehoop -- that may seem absurd. And yes, to some extent, it is. But who are we to say that there's only one right way to watch basketball? Who am I to get mad at you for disagreeing with the way I watch the game? I love basketball because I love the sport. I watch the game to enjoy it, not to lord over other people how without-question superior my manner of watching is to your own. Sometimes, as a Spurs fan, I forget this. I get caught up in the wave of people pounding their fists and yelling at God. "Why don't people understand the Spurs? Why don't people see how beautiful this is? Why don't you appreciate it?"

As Ballard's piece ends, he asks Duncan why Duncan never lets the public see his lighter side, and the one that his fans have known about all along. Why not let them in and see the kind of man you really are? Don't you care about your legacy? About how people view you? He asks why, and blows it off. "I have no control over that." Ballard says he does, and insists on it. Duncan thinks, ponders, and frowns. "I guess I could. I could be more accessible and be the darling for everybody. I could open up my life and get more endorsements and be out there and be a fan favorite. But why would that help?" A pause. "Why should it?"

And there, in no fewer than four words and a minute of thought, Duncan succinctly realizes and internalizes what Spurs fans and NBA scribes should've realized long ago. Sure. Duncan could show his personality, become more accessible, get more endorsements. The Spurs could play nice to the national media, Pop could tell more jokes, and they could get a few more great commercials in their favor. But none of those things cut to the grain of what Duncan really is -- he's a basketball player, and his on-court style and demeanor would never stray far from the place it's at right now. Ruthless efficiency. Aesthetically strong. Dynamic, strong, powerful. And nothing he says, or shares, is going to change that. If people don't like his game, are they really going to like it all that much more if he spent the time to put a few more bows on it? Would the Spurs be more likeable? Would more people watch?

Appreciate Duncan, if you'd like. I will, forever. If you don't want to? That's OK, too. Because if Duncan hasn't shown enough to make you love him on your own, nothing I say is going to make a damn bit of difference. So as the Spurs continue their "boring", plodding, nationally ignored quest for Duncan's fifth ring, you can think whatever the hell you want. It's subjective. Duncan realizes that nothing he does is really going to change your mind, and he'd be better focused on what actually matters to him. His friends, his family, the game that he loves. At his 1000th game, Tim Duncan was asked how it felt to be at that kind of a milestone. He sighed at the reporter. "I'd rather not be told that. I've played for a long time and I'm getting really old, alright? I'd rather be at my tenth game with a thousand to go." That's Tim Duncan. He doesn't have many games left, and he doesn't really care what you think. Duncan is more focused on enjoying the time he's got left in the game he loves than giving the time of day to those who find him boring. I think that's admirable. And going forward, I'll try to live up to that. Call the Spurs boring, call Duncan a dullard, call Pop a crusty fool. Don't expect me to dissuade you.

Because if you aren't convinced already? Well, there's really no reason for me to try. 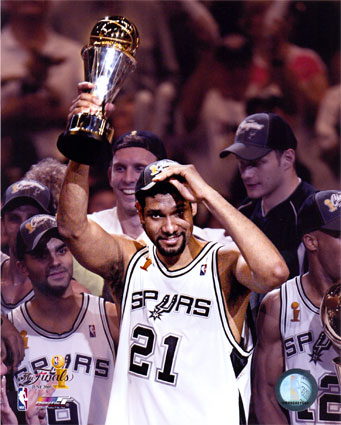