As one of our mainstay features, Aaron is writing posts highlighting every single player in the NBA. Role players, superstars, key cogs, or players who are barely as useful as ballboys -- none are exempt from the prying eyes of our readers. Check the index for a lowdown on order, intent, and all that jazz. Today's trio includes Derrick Favors, Andrew Bynum, and Jrue Holiday. 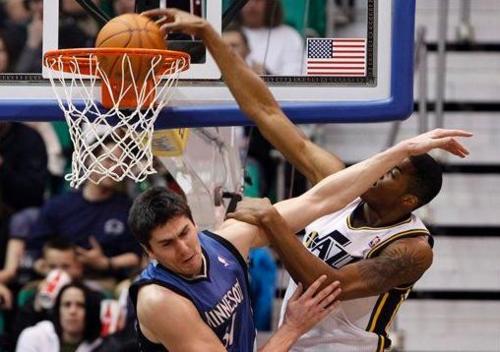 I see a lot of promise in Favors' game. He was a decent defender as a rookie -- not a major plus defender like Ekpe Udoh or Greg Monroe, but a solid defensive player for a rook. He clearly worked hard on that end. In general, his game is fun to watch for someone like me -- it's generally predicated on hard work, even if he doesn't always know exactly what he should be doing. He's always bodying up and trying to establish position underneath the basket, working really hard to get himself in position. It doesn't tend to lead to much of anything, as Devin Harris doesn't really like setting him up (for whatever reason), but his effort at trying to get himself open even in the face of rarely getting the ball is nice. He sets killer picks, too, which is always a great sign for a young player.

And don't beat around the bush -- Favors is YOUNG. He was, in fact, the youngest player in the NBA last year, and has the distinction of being one of only two players currently in the NBA born in 1991. Which is pretty absurd, all things considered. His statistics aren't great, and honestly, watching him you tend to see why -- he fouls out far too soon, doesn't seem to have a great grasp on how to deal with tough defense, and gets somewhat discouraged when he has a bad game. But he's hyper athletic, very talented, and has shown promising signs of someday being a major player for a contender. He has games where you wonder why he's in the NBA at all, then has games like the late season Jazz win against the Lakers last year where he defended Pau very well and showed some signs of someday being a go-to big in the league. As I said, lots of promise.

The one issue I have with him, really, is that he came from an absolutely horrible college coach that developed him poorly and it's essentially going to be up to Ty Corbin to make sure he turns out alright. "Promise" cases don't always turn out happily and there's no particular reason to think Favors is going to make it -- his rookie stats are, again, really terrible. And while I see promise, I could also see him simply remaining one of those Ian Maihinmi-type players who seem to exist solely to be the big men on the recieving end of the star calls that Kobe, Wade, and LeBron get so often. And, again -- Ty Corbin? Color me not-so-confident. I do hope he turns out well, though. As I said before -- hard worker, seems like a good kid. Best case scenario is a poor man's Kevin Garnett. That's not a bad best case at all. It's up to him to make sure it happens, I suppose. 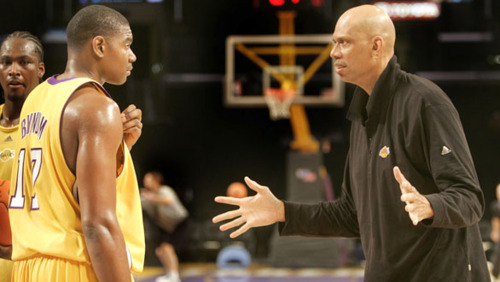 I really, really do not like Andrew Bynum. Emphatically so. This isn't because his game is overrated -- it may actually be underrated. I completely agree with the Laker fans who insist that Bynum would be a top three center in the league if he stays healthy. I agree that he often shows more hustle and grit than anyone on the Lakers, and I agree he has that elusive will to win that makes him valuable for a contender. If you ever hear from a Laker fan that there were only two players that even gave a crap in a Laker game, chances are pretty high that Bynum was one of them. And he's not lacking in dominant performances -- see his 42-15 game, or any number of the times he's gotten high 20s in points with high teens in rebounds on 60-70% shooting. When Bynum is on, there are few centers in the league who can match him on offense, or even contain him. And his defense? Extremely good. Never will be league-best -- not while Bogut and Dwight are around -- but Bynum is a major plus defender and a great guy to have in your corner. The Lakers, you may remember, rolled to a 17-1 record straight after the All-Star break -- the primary reason for their insane play was Bynum, whose defense was about as good as it could reasonably be expected to ever be. Shades of Dikembe Mutombo, even.

So, I basically just described a player I should like quite a bit. His style is a nice combination of everything I like watching, in a very generalized sense. Why don't I? Pretty simple. He's an arrogant S.O.B. who thinks his game is essentially perfect as is (given that he's refused repeated offers from Kareem of personal tutoring dozens of times). He spends such an absurd amount of time injured that the Laker fan diatribes about how great he is are generally undermined and worthless. Most of all? Great defender, sure, but he's also an immature and dirty player. The completely terrible bush league hit on J.J. Barea at the end of the Mavs sweep that he felt wasn't all that big of a deal wasn't the only example. Check this hit on Beasley, if you want to see dirty. Perhaps this hit on Gerald Wallace is more to your taste? Keep in mind that these are all from the last few months of this season. It's starting to become a somewhat concerning pattern. And while I'm certainly among those who think that the league might have gotten a bit too soft in its reaction to the 80s and 90s, I don't particularly want to see a league where players are starting Kermit Washington-style deckings on a nightly basis.

Andrew Bynum, for better or for worse (and in my view, strongly worse), is the highest profile player with any chance of doing that. More than KG, who shirks from actual bodily harm. More than Charlie Villanueva, who probably just needs to go to therapy. Like, a lot. Andrew Bynum has the requisite combination of rage, heft, and immaturity to physically harm another player -- on purpose. I don't like that. I root for the Cleveland Indians, after all -- I'm more than familiar with the story of Ray Chapman's untimely death at the hands of Carl Mays. If there's any NBA player who fits the dossier of a modern day Mays, it'd probably be Bynum with his inability to take responsibility for his actions and his rampant disregard for the amount of damage he could do to another player. I'd like to think that won't happen, though. I hope.

Anyhow. One of my Laker fan friends, Cesar, started a religion. The Disciples of Bynum-Jesus, I think they're called -- a reference to the now-defunct demo of NBA Elite 2k11 where Bynum "stands in the middle of the court like Jesus or something" due to a hilarious clipping error. For Cesar's Bynum-Bible, I contributed a Psalm. I guess I'll end this capsule with it?

53 They met at the foot of a great mountain, Jesus and Phil
54 " I need to go smoke some peyote, have fun with mike brown"
55 And the Bynum Jesus stared sadly into the sunset as Phil vanished
56 To calm his nerves, he punched a Puerto Rican midget
57 And it was good 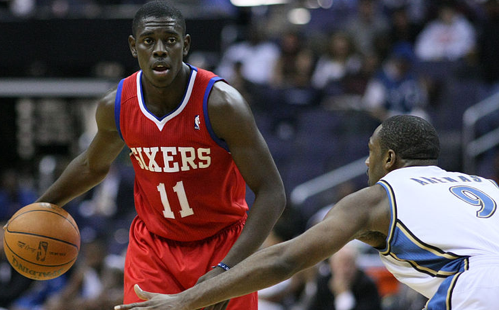 Man, I really like Jrue. I'm no big UCLA guy, but I can't deny that Howland does a pretty good job preparing his boys for the NBA. Jrue was incredibly underrated his rookie year, due to the glut of flashy and quality point guards that were around his freshman year. Steph Curry, Brandon Jennings, Tyreke Evans, etc. For my money, he's always been a better defensive point than any of them -- and while point guard defense isn't a humongously valuable asset due to the minor role they play in a team's defensive structure, having a point guard who can switch out and defend the better of the opposing team's two guards is an underrated asset to having a solid defender as your floor general. As for offense, while I think he was clearly worse than all three of those guys his freshman year on that end of the floor, he's recouped his sophomore year and added a few more moves and became a better pick and roll passer.

Jrue couldn't really be more dissimilar to Brandon Jennings in style and general swag, but as a scorer, their skillsets are actually extremely comparable. Both of them have decent (not great, but decent) outside shots. Jennings takes a few more shots, but their games both fall apart at the rim, where neither of them have very advanced finishing talent. Decent shooters, both, but poor at drawing contact -- both of them incidentally have the strong potential to improve on that front, much like Iverson and Rose did later in their careers. They're both very good floor generals, and they run their teams well. The Sixers have more offensive options than the Bucks (depressing, but true) and Jrue gives the ball up more than Brandon does because of that, but with the exception of the number of shots they feel they need to take, there's not much differentiating the two.

Except age, which is really the avenue where Jrue's most underrated -- like Favors above, Jrue is incredibly young. He was born in 1990, in fact, and was the first player to play a game in the NBA born in the 1990s. He's already a decent floor general, and the potential to improve from his current state (good point guard who could definitely start for a contender) to a key franchise guard is clearly there. Long story short, there's a lot of potential with Jrue. And unlike Favors, he's already made good on a lot of it, enough so that if he never improves he'll still be a very valuable, worthy player in the league. Not too bad for a guy who played his first crunch time minutes in a playoff win months before his 21st birthday.

Here's your daily riddle. Only one player tomorrow, but he's a long one.