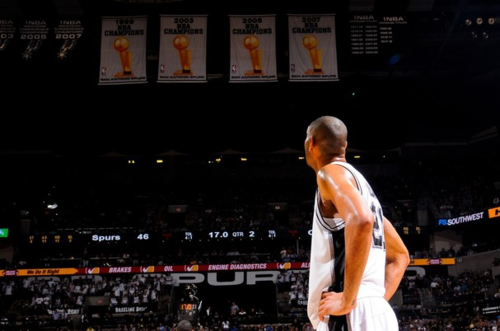 Nate Jones (@JonesOnTheNBA) recently made an argument against Tim Duncan's private, quiet approach to life in the NBA. It's one he's been making for a long time. The argument goes like this: basketball - regardless of the product's essence - is an entertainment business. Tim Duncan is an interesting person and an important basketball player. In the hands of the right writers and interviewers, Tim Duncan could be marketed as a fascinating public figure. Therefore, opening up to the media should increase Tim's brand recognition and that of his team. In Duncan's case, it would also be good for basketball in general (and the NBA in particular) if Tim did so, because he embodies rarefied, virtuous qualities on and off the court. There are templates for Duncan to follow such as Steve Nash, but regardless of how he does it, Tim Duncan should become a more public person, at the very least showing his interesting personality to the national media. In fact, one could argue (as Jones does), Tim Duncan's salary is paid precisely because more athletes don't follow his quiet path. Duncan may not like it, but morality appears to demand that he seek an active public profile for the benefit of the league.

First off, let me stop and note something: There's a piece I wrote recently that I absolutely will not publish in its current form. (EDITOR'S NOTE: And it's not just because I won't let him. -- Aaron.) The piece starts with a petty complaint about writers complaining about the Spurs and then goes on to posit alternatives. Yeah, not a great pitch to begin with. But there was a moment of realization that illustrated a greater concern, and made the piece fall apart in the end: Spurs fans have insanely little to complain about, right now. Voicing these complaints amid a sea of light, fat-free criticism (that never failed to acknowledge the Spurs' greatness on some level) would therefore be not only tonedeaf but ungrateful. The Spurs are blessed to be the rock of the NBA and I'm blessed to be one of their fans through this stretch of basketball. So I'm not really going to complain about anything today. As Browning said, "God's in his heaven/All's right with the world." And Duncan's at the four. (Or five, if we're being honest.)

But Jones' argument needs to be addressed I think, not as a Spurs fan and not as a Duncan fan. No, Jones' argument needs to be addressed for the sake of keeping perspective in our demands of public figures. Consider this. In Chris Ballard's piece (four words we will repeat in aeternum) about Duncan, Tim is in a hotel elevator with Ballard when suddenly a family of three enters:

_ Here's what the husband does not do. He does not do a double take, betray any recognition of Duncan or make a comment about the previous night's game or this year's postseason or that one time Tim Duncan did that amazing thing. The wife does not bat her eyes or squirm. The daughter does not think OMG! OMG! OMG! and start texting furiously. This is not LeBron or Kobe. Or even Melo._

The door opens, the family leaves without looking back. Duncan looks relieved.

It's a very simple and poignant take - in a moment, Ballard has perfectly illustrated the price of fame to someone like Duncan. The price of fame is not just the simple cost to an athlete in time and pretentious, insipid discussions of brand (doubly so for an introvert). It's also the constant cost a famous person endures whenever he walks out the door. It's not just the people that rave over him that he meets in elevators. It's also the people he doesn't meet but that always threaten to address him and his family in public with a bit too much familiarity. It's not just the "shaking hands and kissing babies" part, to put it in presidential terms. It's the Secret Service part.

The consequences of increased fame aren't just present in an interview or two with the incredible Chris Ballard: they're in the hordes of tabloid writers. They're not just in the long-term recognition of his image, but also in the long-term commodification of his image and the lessening of his control over that image. Not just the extraordinary people he'd meet, but also the ordinary people the earthbound Duncan would have trouble dealing with on an equal and uncomplicated footing. Not just about his own privacy, but also about his wife and daughters' privacy. Not just about the privileges he's not taking advantage of on behalf of the league, but also about the corrupting influence of such privileges on him and those around him. And so on and so forth. Try to say you're humble when you've got a billboard in the center of town promoting your book. Try to say it's not about you but about the team, then, when you're being paid to wax rhetorical about what taking the last shot feels like. Try to say that journalists are worth your time when feckless hacks like Dan Shaughnessy are twisting everything you say -- even your small, humble quips -- to make you appear a confidence-lacking lesser star. Please. Go try it. 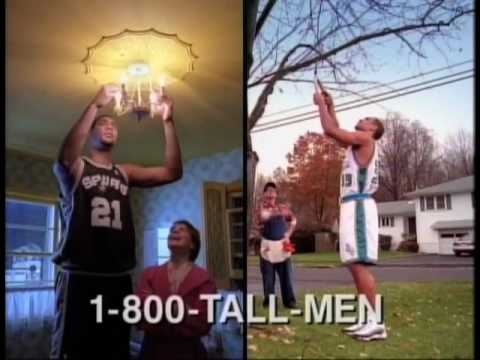 Yes, Duncan is a smart guy and could probably figure out how to make fame as controlled, pleasant, and altogether about his message as anyone else. But when you demand that the more private public figures be more vocal and start holding their salaries over them, well, realize something. You're not only asking for them to share their lives with the world more: you're also asking them to bring the world into their lives more. The athletes that welcome some measure of this intrusion should be respected as a necessary part of the ecosystem of this entertainment business. But let's not ask someone like Duncan to make such sacrifices unless we're damn sure we're clear on the costs. At some point Jones posted a tweet that really bugged me.

Nate Jones @JonesOnTheNBA: Duncan should care, @Rags8, because the league has enabled him to become a very rich man. There are obligations that come with that. 2:06 PM - 16 May 12

Can you see why I think this all needed to be said? Take it all together: Duncan gets paid a whole lot, but for that compensation already has plenty of obligations endemic to being a public figure, even if you ignore his 82+ appearances in front of thousands of fans to perform at a world-class, historical level. (Let's not even touch the looming fact that salary caps and max deals are effective price ceilings below market clearing price for a franchise-cornerstone star like Duncan.) Oh, and Duncan also has to go on the road away from his family for 41+ games a season. Oh, and he constantly makes physical sacrifices to maintain his declining, ever more precarious athleticism. Oh, and even if he isn't necessarily seeking out appearances, he addresses the media (and often appears at press conferences) after virtually every game of the season. Jones may be respectful of players like Duncan as players and human beings, but when it comes to the public realm Jones is dipping dangerously into the well-worn "ungrateful to be paid millions to play a children's game" trope.

Isn't it far more plausible that the intelligent and conscientious Duncan does care, and does recognize (as he says over and over again in interviews) that the league is an entertainment business... but still wants to strike a compromise for his public image that's further on the spectrum towards privacy than a Steve Nash? (And by the way, don't these more public athletes like Nash get further compensated for such public appearances? Just saying.) Why is any of this wrong in the slightest? Duncan has done everything with his basketball skills with remarkable class. Perhaps I'm biased, but I'd say that Tim has given us more than enough. In his long career, he has produced his personality for the league more than enough. He has produced financially for his team and league far in excess of his salary. He has produced spiritually for fans far in excess of what he has been given. Asking Duncan to do more -- to sacrifice more -- may be effective as a conversation-starter and indeed, Jones articulated plenty of great points.

But with the disengagement of an observer, Jones has given us precious little in the way of empathy or insight for Duncan's real options and priorities. Duncan made a choice. And while I would defend til death Jones' right to critique Duncan's choice, a fair assessment of the personal implications of what Duncan's choice entailed is critical to the argument here. You can call foul on Duncan's introversion and decry his quiet nature. You can say he should've brought the media into his life. That's your right. But understand the hidden costs, and at least acknowledge them -- it's a choice he made, with tangible benefits and drawbacks. It was not a moral obligation. The argument should be framed accordingly. 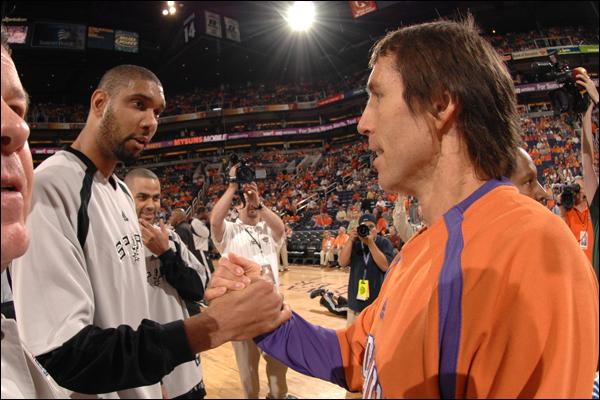