As one of our mainstay features, Aaron is writing posts highlighting every single player in the NBA. Role players, superstars, key cogs, or players who are barely as useful as ballboys — none are exempt from the prying eyes of our readers. Check the index for a lowdown on order, intent, and all that jazz. Today's player is KEVIN GARNETT, whose name we will put in all caps to ensure he knows we are giving him the proper respect. Don't kill us, KEVIN. 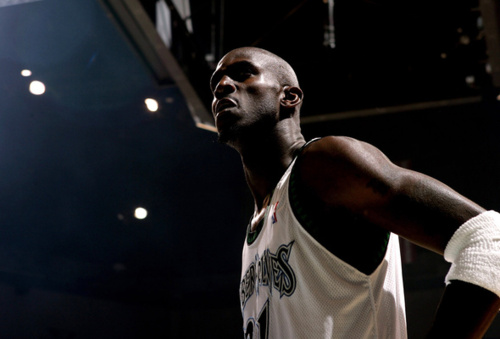 Now that I've started with the most important sentence of the piece (and one that I will explain later), I will try to explain my horrendously complicated feelings on Kevin Garnett. I'm not one of those people who thinks that KG at his prime was really equivalent to Duncan at his prime. I know there are some, and I don't think they are altogether lacking in a point, but I simply don't think that you win four titles with KG in Duncan's place. One, maybe. Two, possibly. Four? No way. There's no way KG dominates New Jersey the way Duncan did in 2003 with the battered and old Spurs team that was behind him, or even simply beats the Lakers. I don't think Garnett leads the Spurs back from being down hard in game seven in 2005. I don't think 1999 Kevin Garnett would stand much of a chance at a title, and while I think he'd still win 2007's title, I wholly admit that 2007 was the only title of Tim's 4 where Tim wasn't the first, second, and third options on his team -- he was merely the first*. Regardless. Perhaps he'd have won 2006 as well, or broken through in 2003 or 2004. Perhaps he'd still have 4 titles. But I sincerely doubt it.

* Yes, goddamnit, he deserved that finals MVP. He had more support in 2007 than ever before, but he still wholly deserved that MVP.

No, I'm not particularly conflicted about his basketball talents. Dirty though he may be, KG is a top six power forward in league history. Duncan is first, Malone is second, and KG is in a nice little bubble with Dirk, Barkley, and Kevin McHale. Maybe Elvin Hayes -- I honestly haven't seen much of him, so I don't feel comfortable rating him. The other six, though? They're the class. And KG is among them. Not at the head, as Duncan pretty well laps the crowd, but he's among the stragglers. Not a bad place to be, all things considered. And in all the whining about LeBron's "horrible" Cleveland teams and offhand comparisons to Kevin Garnett's awful Timberwolves teams rather ignores the fact that his Timberwolves teams were roughly 200x as bad as LeBron's Cavs teams.

After Ferry got into town, he got LeBron a great shooting close to all-star point guard who let him run the offense, a close to all-star big man who has and always will be incredibly underrated (Big Z in 2007-2009, until the playoffs), a veteran defensive wizard who still had stuff in the tank (Ben Wallace), the only man in the league fat enough to guard Dwight Howard (Shaquala Williams, clearly), and a competent cast melded around LeBron's skillset, flaws and all, so that LeBron could be the best player he could possibly be. Oh, and he also got the best defensive system coach around to make sure that the team's problems could be hidden. And would always spend on draft picks and refuse to make sure the Cavs had the biggest chance they could have. KG? He had... Sam Cassell. And that was pretty much it. Terrible coaching every year he was there, terrible teammates, an owner that didn't spend a dime to keep KG around, and quite possibly the worst NBA market in the league. Remind me again why people consistently compare the two situations? KG didn't do as well in Minnesota because Minnesota didn't do as well as Cleveland to put a team around him. Not to mention KG in his prime was worse than LeBron in his last few Cleveland years. But that's a whole other turkey.

Regardless, I'm not really conflicted about his basketball talents -- very talented, but I think I have a proper sense of where an all-hustle all-grit defensive savant with a knack for filling the box score belongs. What I'm truly conflicted about is KG as a person. Because there are a lot of times I think about KG and I feel a whole lot of sympathy. And you should too. Did you know that KG lost his closest Timberwolves teammate, best friend, and college idol in a car crash early in his NBA career? Because he did. Malik Sealy, in case you were wondering. There's a relatively well done interview on the subject. KG cries. If you think you know a damn thing about KG and you haven't seen this interview, you're utterly mistaken. And KG, more than most, has a legitimate case for being enormously misunderstood throughout his career. While he has a bully-ish sense of humor, he's a pretty funny guy. No Shaq, no Duncan, but it's a great sense of humor that's fun to watch when he's not being super obnoxious. Like this. Or perhaps this would suit your fancy. Both great examples -- hilarious, classic KG. And the side of KG that has gotten virtually no play in his career in favor of the "KG is literally a crazy person" narrative.

Which brings us to the unfortunate part of this post, and the part where my conflict begins. Ever since KG was traded to Boston, he began a slow descent into proving that pesky narrative right. The playful though intense and colorful KG of Minnesota was replaced by -- frankly -- pure unadulterated lunacy and screaming. When he was with the Wolves, his intensity always struck me as a very real manifestation of a suffering star who really wanted to win, but was simply hamstrung by a terrible situation. And when he first got to Boston, I gave him something of a pass -- he hadn't won a title yet. He'll ramp it down when they win something, and go back to being a KG that a man can root for. Right? Hah. No. I absolutely positively detest the KG I see on the court now. I can't stand Boston games, and it's primarily because of him and Pierce. He has chosen to deal with his body breaking down by transferring what used to be defensive acumen based on athleticism and his crazy lift for "hey, if I stealthily elbow you in the gut, maybe you'll be slower and easier to defend" and general dirty tricks on that end. And, obviously, his intensity has gone from "hah, ringless vet getting at it" to "wow, this guy needs some anger management classes." He has told rookies that wanted his autograph to fuck off. He refuses to pick fights or even react to players who ACTUALLY have the ability to hurt him, and now focuses all his trash talk on undersized bigs and guards -- people who pose no real threat to him.

Which leads me to be about as conflicted as I could possibly be about him, at this point. I remember rooting for KG, back in the day. It was fun. And I wish there was a way to do that now without feeling like I'm rooting for a schoolyard bully. Who can't read. And now that I've used it a second time, I'll explain the line. There was a post on CelticsBlog about two years ago where they were discussing one of Garnett's injuries. It was pretty sad. He was gonna be out for the season. The comments were a bunch of people discussing their issues and things they thought KG needed to do. I don't usually read comment threads, but something compelled me to keep reading. So I did. And there was some joke about how Kevin Garnett couldn't read. I laughed, because it made no sense but seemed like a KG kind of joke. Then I read another. And another. I linked Alex, and we kept scrolling and scrolling, eventually stopping at a count of about 37 comments mentioning in some form or another how Kevin Garnett couldn't read.

Then, just as soon as we finished, I saved the HTML for safekeeping and Alex reloaded to see if there were any more. There weren't! Because, as it turns out, the admins deleted all of the posts and were most likely in the process of deleting them when Alex and I found them. The posts had begun about ten minutes prior, which means for anyone else to have read them, they would've had to have been at the website in that ten minute interval with the two of us. Highly unlikely. So I doubt I'll ever get any kind of confirmation as to what the hell kind of a ridiculous trolling concept that was or where it came from. Which is a shame, because the "Kevin Garnett can't read" meme is probably the most hilarious meme I've ever heard of. Just imagine -- KG at a library, just getting furious because he cannot access any of the information around him. Just, steam billowing out of his head, an insatiable urge to beat a stanchion, etc.

Man, KG is fun to write about. 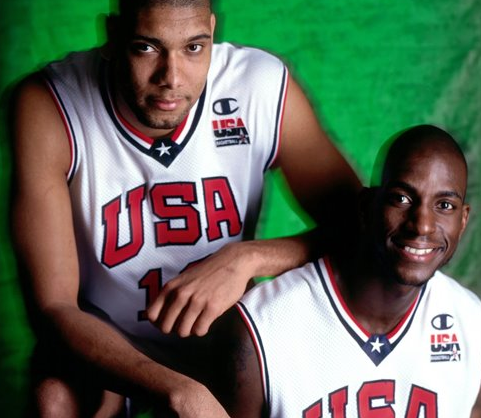 And now, the daily riddles.

015: I honestly don't think there's a less entertaining to watch player in the league than this guy.
016: While he is a bust, I think he's gonna get minutes next season. Whenever that may be. He might pull a Kwame surprise.
017: Might be the single most underrated point guard in the NBA, bar none.