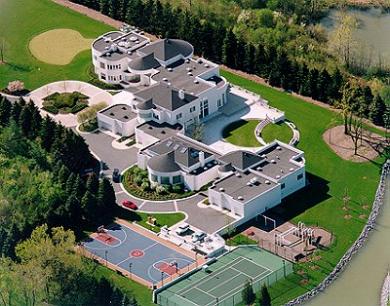 Today, I read two very important articles within about 15 minutes of each other. They set off an incredibly angry tirade in my head that I couldn't do all that much about, and still can't. Except write it down. Which, as millions of NBA fans everywhere are uncomfortably discovering, is virtually all we can do. We hold no leverage, no power, no pull. And while I'm not saying we should have all that much power here, there are moments when I can't help but get depressed by the fact that we have absolutely nothing we can do but wait and see what happens while borderline insane factions of owners battle a downtrodden and de-toothed player's union. Nonetheless. The first story I read, thanks to Kelly Dwyer, was a somewhat interesting exchange from the run up to the 1999 lockout.

During the mass owner-player meeting yesterday, Jordan engaged in a heated exchange with Wizards owner Abe Pollin. Jordan's showdown with Pollin and fellow Bull Steve Kerr's verbal battle with David Stern were the highlights of the 11/2-hour meeting, according to several players.

According to players, Pollin said about his fellow owners, "You just have to trust us."

Jordan fired back, saying, "You've got to trust our negotiators." Jordan also blasted owners for not bargaining in good faith in the offseason and said to Pollin, "If you can't make a profit, you should sell your team."

Sound familiar? Dan Gilbert's "trust my gut" line isn't really a new sentiment. Abe Pollin's pleading for the players' trust is just about the same, and just about as baseless. There's no particular reason to trust an ownership group who is trying to kill your union. Jordan was right for standing up to the owners. But, really -- the 1999 lockout isn't the 2011 lockout, as we're discovering. And to be honest? The owners during the 1999 lockout were clearly operating from a position of better faith than the 2011 lockout. As I discovered firsthand from this particularly infuriating piece from the New York Times outlining the demands of a certain faction of the owners. Led by none other than the league's all-time golden boy. The same person from the previous story, in fact.

A faction of 50 N.B.A. players is threatening to dissolve the union if it compromises further on player salaries. The league is facing an equivalent threat from a trenchant group of owners, who are vowing to oppose any deal that gives players more than 50 percent of revenue.

The owners’ faction includes between 10 and 14 owners and is being led by Charlotte’s Michael Jordan, according to a person who has spoken with the owners. That group wanted the players’ share set no higher than 47 percent, and it was upset when league negotiators proposed a 50-50 split last month. According to the person who spoke with the owners, Jordan’s faction intends to vote against the 50-50 deal, if negotiations get that far. Saturday’s owners meeting was arranged in part to address that concern. ...

Despite the misgivings of some owners, Commissioner David Stern has said publicly that he can garner support for a 50-50 deal and will continue pushing for it. But the longer the negotiations drag on, and the more games are canceled, it is more likely that the hard-line owners will demand reductions. That group backed an initial proposal that would have cut the players’ share to 37 percent (from 57), eliminated guaranteed contracts, rolled back current salaries and imposed a hard salary cap. The league has since dropped those demands over the objections of those owners.

This is a lot to digest. So let's start at the top. The picture I started this post with is a photo of Michael Jordan's house. Jordan bought that house in 2010. It's worth $12.4 million dollars -- $4.8 million for the land, $7.6 million for the construction. It's highly likely that my net worth over my entire career will be less than this house he built, using money he earned as a player and as an icon. And that's quite his right. What I don't think is quite his right is demanding that players submit to completely fucking insane draconian proposals. Jordan always had his brand behind him, and from the time he took off in the NBA, he essentially was set for life. Jordan was never a middle-class NBA player -- a star from day one, all things considered. But he didn't let that stop him from fighting for the players in 1999, and helped the players get a deal that was -- frankly -- the best deal any professional athletes had in any league.

Now? It appears that Jordan has pulled a Harvey Dent. He has lived long enough to not only become the biggest villain we've seen in this lockout, but to become a grotesque caricature of one to boot. A villain who demands the players' unconditional surrender with no recompense, despite the fact that not less than 10 years ago he was among their ranks. A villain who would rather endanger the legacies and careers of dozens of young stars with a lockout that lasts not just months, but years than accept a deal that lets the players save face and protect their sport for future players. You couldn't write a better comic book villain here. You may not remember when the owners released their original proposal -- nobody paid it much attention, because it was fucking crazy. The rollback of all current salaries? No guaranteed contracts? A rock-hard punitive cap, and a reduction of the player's BRI share by TWENTY PERCENT? No way any owner actually thought that was reasonable, the story went. There's nobody on the owner's side who's that crazy. That's the equivalent of walking into a new car lot, demanding a Mercedes for a nickel, then being flabberghasted that they won't sell you the Mercedes for five dollars -- after all, you've made some SERIOUS concessions. Nobody could possibly demand that in good faith. Right?

Oh. Wait. It looks like Jordan's batshit crazy competitive desire doesn't just apply to basketball. It doesn't just apply to the obsessive way he approaches gambling. It doesn't just apply to his rude, cantankerous, and altogether inappropriate Hall of Fame speeches. It also applies to the way he does business. And unfortunately for NBA fans, Jordan has finally latched onto the one place where he CAN do business this way -- if Jordan ran a business in a competitive market and made demands like this, nobody would work for him, and he wouldn't be able to be quite this insane and still pull a profit. But the NBA isn't a competitive market, it's a cartel. The owners have a monopoly on the only professional basketball league in the country -- there's no ABA to go to, no backup plan for the players. It's NBA or bust. And if the owners want to be pathetic racists a la Donald Sterling, the only person who can really do anything about it is Stern. If the owners want to be money-grubbing crazy people like Robert Sarver, nobody really can bat an eye. And if the owners want to demand insane concessions and cry foul at the players for trying to preserve their livelihood? Well, looks like nobody can even say much of anything.

After all, he's God disguised as Michael Jordan. Right?