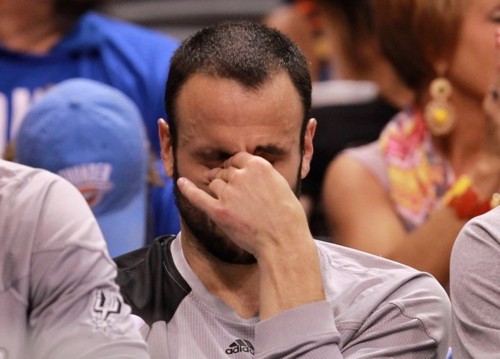 Here's the run, in my eyes. On game nights, I felt that I was vicariously solving some great problem through my Spurs. Every night, they solved some advanced geometry problem with methods the world has never seen. In the mornings, I'd get the glorious feeling of stillness and placidity that accompanies triumph. My favorite team has been fun, likable, and virtuous, at least in my view. I've been quite pleased with what this team has offered up in the previous 20 games. I don't know if any fan of the sport wouldn't be pleased with a run like this.

It probably helps that at the same time this was going on I - a mostly sedentary individual that has always seemed just a bit depressed and cynical and vaguely way-too-reserved - lost something like 25 pounds during the winning streak and developed hitherto unexplored levels of maturity and self-confidence, as well as the vague overtones of a workout routine. The Spurs have reinvented basketball less than I've reinvented my life, and that might not be obvious just talking to me. This blog is as successful as it has ever been, which probably has at least something to do with my editorial mind being as sharp and direct as ever. And I know as much as I ever have about basketball, because for me every other night has been a clinic in the sport, not just as it is today but as it shall be 5 years hence in some optimal future. Most of all, I finally have some mental picture of the end, the culmination, of all my recent work and struggles.

The timing is coincidental, of course. But it's also uncanny: I can't deny that the streak probably helped.

Or maybe it hasn't helped at all. Perhaps it was a prelude to darkness.

Perhaps the Spurs are just building up my confidence only to unkindly tear it away in the span of one defining week, succumbing to a collapse previously unseen in basketball history. The Thunder are a great team, and last night they found another gear. The tenacity we saw last night retroactively justifies every "promising young team" label previously affixed to them. Maybe the Spurs shall lose, and I with them, these present delusions of efficiency differential and emotional honesty to be unkindly discarded into a bin of reminiscence labeled "Worst Possible Match-Up, or that's what you can tell yourself" on the fringe of the quicksand pit.

But you know what? Although it may not last, I'll always remember Tim Duncan quietly rising up the blocks list. Loudly punctuating the blocks with vision and spryness in his forays to the rim, forays that we'd thought had left this land. There's some magic still, in that old knee brace.

Although it may not last, I'll always remember Manu finding the exact moment of leverage when his team needed a throwback. On the margin, a crucial defeat averted. His hammering -- constant, pounding -- of that margin with the precision of a sculptor.

Although it may not last, I'll always remember Danny Green and Kawhi Leonard -- players inexplicably discarded by the decision-makers of the league until the interest of the Spurs -- burying the Jazz almost singlehandedly in a 20-0 run as their battle-tested brothers in arms watched with glee.

This team is not forever, yet. After all, last night hinted at a dark possibility. They can be, but they aren't yet there. This team is mortal -- they bleed, too. To make presumptions, as a fan, is to be taken by surprised and bleed right with them. But even as they lie, bleeding in the corner like a boxer who wasn't expecting the perfect counter, I can't focus on that right now. I can only focus on what I know, and the things about this team I know I'll never forget. Tiago taking over the fourth, the senseless carving-up of the weaker teams (28 in total), the faint praise for Richard Jefferson, the backhanded compliments everyone gave Stephen Jackson, the passing and drives of Boris Diaw, the ridiculous enthusiasm of Patty Mills, Matt Bonner receiving a transdimensional warning from 45 light-years away and calling up to the president without hesitation, Gary Neal's limited handle and limitless self-confidence. S-Jax - swiftly upon return - guarding Dirk as it was written and as it shall be done.

That was the month (or two, or three) that was. Learning the early offensive sets, seeing that "sometimes it's a miracle" (as Popovich said of the offense after Game 2), the aura of success, trying desperately to write about it but knowing I'm simply too close and vulnerable to it to express myself, recalculating legacies, becoming superstitious, judging the Spurs fans that predicted the Spurs in 4 and incurred the wrath of the Basketball Gods, watching every game. It was surreal and awesome at every turn, in something like equal measure. In parallel came my personal journey: cooking low-calorie masterpieces in eternal taste and economy at the half, watching in shock as the numbers on the scale dropped past even my expectations, finally running that entire path without stopping, having my concerns change from anxious fixations and strange abstractions to plans and to what has precedent, reading every blog post I could possibly find, and finally... discovering that I could have the ideals I'd imagined myself having when I wrote things nine months ago in anticipation of a better life.

Things seemed to come full circle. And after the bags were unpacked, I simply relaxed and enjoyed as I watched Tony Parker finally become a Spur in his unimpeachable, inarguable way. His way and theirs did not so much as align as fuse in a hundred imperceptible gradations. The Front Office -- hallowed be thy name -- and its inscrutable brilliance to solve simple problems in simple ways, and Tony's simplistic "I will take shots close to the basket and eat baguettes all day" style. They finally meshed. Good. Took them long enough.

And as I fully realize the temporary, transient permanence of this team (especially if we lose that crucial Game 4)? Yeah, I'll always remember the punctuating games, the losses that started and ended the streak and perhaps the run: The Lakers doing their dynasty act for what may very well be the last time, on the broad back of Andrew Bynum's 30 boards, and being unkindly swept twice thereafter by the same team, renewed. And then the Thunder, alchemizing their youthful enthusiasm and love-of-game and desperation into something else: by dipping uncertainly into adolescent spasms of swagger and differentiation before inevitably emerged a mature, vicious tenacity that the Spurs have not yet countered. I don't know if they'll find a way. I know they've found ways so many times before. But maybe they won't this time. And that would hurt. If that's so, then I guess I'll remember and sigh at these punctuating games (and perhaps the ultimate result of the season). I'll learn to know this present uneasiness as a deeper shade of melancholy in retrospect.

But I won't despair in some ultimate sense if all the apparent alignments pointing to a title turn out to be a mirage. For in several years, barring unkind fortune to poison the memories, I'll remember this time with a nostalgia I'll know is not simply a mild form of depression, as the aphorism goes. After all, I know that it's quite possible that (as Eliot puts it) these are but the fragments that I've shored against my ruins. But I also know that even if it's true, even with the pain of separation from this time that awaits me, those ruins far hence will not be those of Ozymandias. And without arrogance or bragging, I will know that at least once, as you stand at the ruins, all the fragments you see before you once filled out a mosaic that fit perfectly together in my head, one complete picture of placid confidence as I stood on some balcony, the ocean stretching out before me, yawning with a recent awakening.