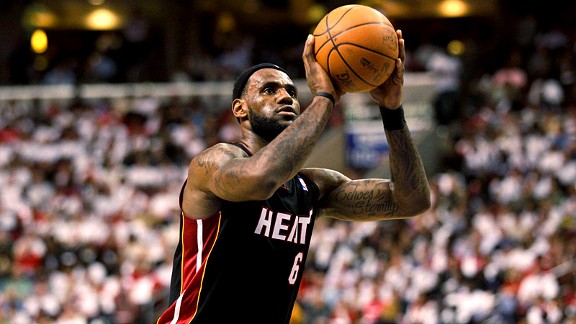 After Friday's Celtics-Heat thriller, a lot of print was inked about the Celtics' offense. This was reasonable to me. After all, it was the 7th game the Celtics had played against the Heat this season, and the Celtics had done a remarkably good job on offense against the Heat. In seven games, the Celtics posted offensive ratings of 104, 101, 129, 86, 96, 119, and 116. For a team who averages an offensive rating of 100, that's above average for all but the last game of the regular season and the first game of the Eastern Conference Finals. Normally this wouldn't be all that weird -- after all, teams have irrationally good offensive performances against certain opponents all the time, right? True.

Except that the Heat are the 4th best defense in the league, and the Celtics the 27th worst offense. If the Celtics averaged what they average against the Heat -- again, the 4th best defense -- they'd average an offensive rating of 107 over the full season. That would be the 5th best offense in the league. And the sample size is now 8 games -- so small sample size is no longer a reasonable excuse. THAT'S absurd, and I understand why that was the story. However, as an avid reader of NBA Playbook and the like, I'd like to direct your attention to an unheralded factor in the Celtics’ Game 3 win last Friday: the absolute clinic the Celtics put on defending foul shots.

Here, we will start at the first free throw I noticed the Boston defense straight up shut down. We'll go frame by frame. 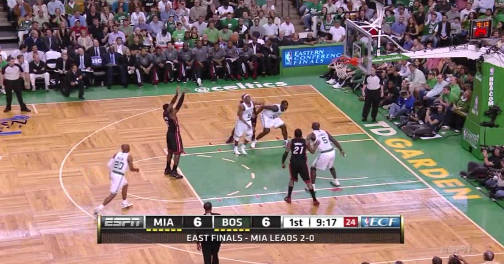 LeBron takes the free throw after a rushed, hurried dribble -- he throws his hands up, as if to say "Hark! Foul! Hark, I was fouled!" Why? Look behind him. Ray Allen, showing why he's still a force to be reckoned with on defense. Bone spurs or not, few in the league provide the threat of a chase down free throw block as well as Ray Allen (5.3% of attempted free throws while Allen is on the perimeter result in blocks, according to Synergy, second only to Mo Williams at 9.0%). Look at LeBron's right foot, separating ever so slightly from the ground. He hears the booming footsteps behind him. He's been there before. He knows what's coming -- Ray Allen, the free throw chase down specialist strikes again. 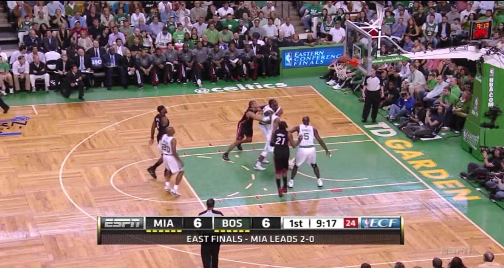 Unfortunately, Ray is unable to complete the block on this play. But as Bill Russell reminds us: "The idea is not to block every shot. The idea is to make your opponent believe that you might block every shot." Sure enough, LeBron's arc is distorted by Allen's phantom presence. In fact, Ray was relatively busy on this play, as we can hear from the baseline microphone.

"Heh, looks like I evaded your block, old man."

"Watch carefully. I slathered the rim with WD-40 while you weren't looking."

"But... wouldn't that mean it'd slide through like butter?" 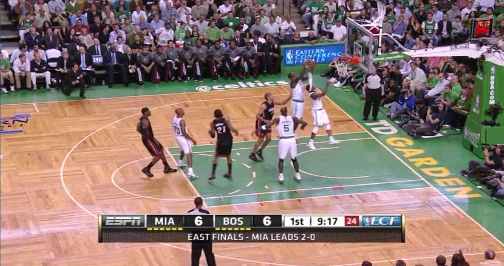 "Heh, you have much to learn about free throw defense, LeChoke Shames."

The force of the raw, veteran savvy-laced insult throws LeBron off balance, almost as though there's a boxer's push. If it weren't for that unsightly (but heavy) beard LeBron's been growing, as you can clearly see in this freeze frame, LeBron would've not only missed the free throw but quite literally fallen over.

Ray Allen's clutch defensive play here deserves a ton of credit. Most work-a-day analysts think that your one-on-one defense ends when the shot is taken, but they're wrong. Real defenders know that your defense ends when the player goes to sleep at night sobbing because your insults and petty criticisms have rocked their self confidence to its core. Ray Allen knows this. And let's not dispute how thoroughly this changed the game. After this free throw, LeBron James went 0-4 on all four free throws he missed. Ray Allen: game changer.

Here's the play in real time.

We will move on now to a late game free throw, where the brilliance of the team free throw defense overwhelmed me. 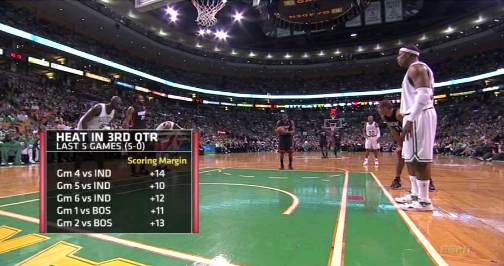 Seems pretty average, right? Look to the right of Chalmers. There's Ray Allen, but he's not going to hog all the credit. Ray isn't rushing for the chase-down free throw block this time. It's up to his teammates to stifle this one with some expert team-ball defense. Let's see what they do. 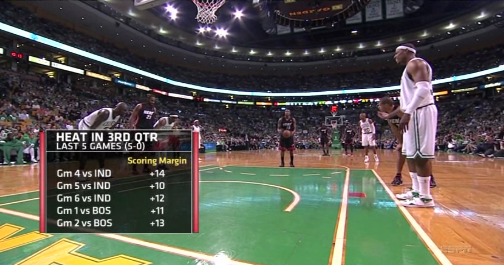 Look at Paul Pierce's hand, where he signals the play, and KG's silent nod of approval. If they weren't communicating with each other telepathically (like a team, because teams do this), here's what they'd be saying:

"I've scouted his free throw form, Kevin. He's going to try a double three-sixty whoop-foul hang time feet set shot with a strong follow through and a smile for the camera. He learned that one at Kansas."

"Gotcha, Paul. I'll channel my anger into an invisible floating brick. It will float in the middle of the hoops on both ends of the court, for the sake of completion, and ensure his free throw bounces the HELL out of that hoop."

"Man, it's pretty cool being a team who knows Free Throw Defense."

"Yeah, and telepathy is pretty cool too." 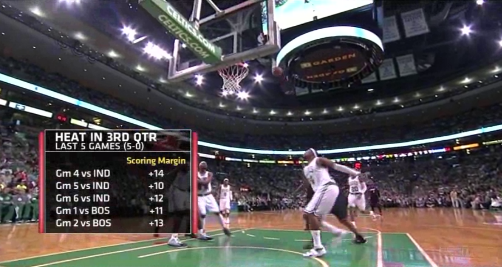 "Is the brick engaged?"

"I can always count on you, Kevin."

We see that Doc Rivers has gotten his team to buy in to their team defensive schemes with a remarkable focus and tenacity. Ostensibly their team culture of "Ubuntu" -- a Swedish word for liver and onions -- saves the day once again. Mario bricks the free throw, Pierce gets the rebound, and the game is saved.

Here's the play in real time.

Using the powers of my spectra-phantasm screenscanning technology, I was able to achieve insight into how Doc Rivers defends free throws. Unbeknownst to us watching the national telecast, Doc Rivers hangs a gigantic obscuring set of large semi-transparent letters in front of players taking free throws. They say "Demo Mode" on them, which is really quite clever -- mode is an anagram of demo, which shows how the Celtics can challenge the free throw from either side of the court, right or left. Nice one, Doc. Though, call me a purist, but the practice of hanging giant floating semitransparent letters to block free throw shooters seems slightly illegal to me. Still substantially less illegal than poisoning the opposing locker room's water supply, though. So I suppose as an organization the Celtics are making some progress. By the year 2050, they'll be down to jaywalking!

It's also worth mentioning that this is -- realistically -- where Boston's defense makes its bread. Seriously. On missed free throws, Celtics opponents score 0.00 PPP, a number far and away better than any other sort of defense the Celtics (or anyone else in the league) can throw at a team. Indeed, in Game 4 we saw Miami completely going away from the free throw strategy to start the game.

NBA officials, to a man, are unbelievably corrupt and furiously angry at Boston, consistently calling the Celtics for fouls that they could not have possibly been responsible for (Source: Tommy Heinsohn). But Boston's free throw defense completely neutralizes this disparity, and if the Boston Celtics can continue shutting down the Heat's unguarded foul shots, we'll have to add a new catchphrase to the well-worn list of basketball tropes. Defense wins championships, keep the ball moving, make the extra pass, and now... against these Celtics? "There's no such thing as a 'free' throw."