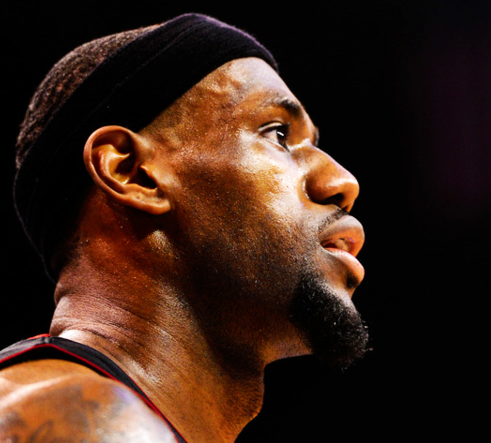 There's a sick twist to those in sports offered to those who enjoy constant, unending success. At Tiger's peak, one began to find themselves more compelled when he lost than when he won. Usain Bolt wins track championships every year -- the last time I saw him on the front page of ESPN was this shocking loss. Every medal Michael Phelps loses this year will only make him more compelling. When the 2011 University of Connecticut Women's Basketball team lost its first game in 90, it was national news. It's an interesting wrinkle to a legacy of consistent success. At some point, you actually invert the properties of selection bias. When you miss nearly every shot you take in a game, your makes are that much more memorable. When you make nearly every shot you take in a game, your misses are that much more memorable. Just ask Skip Bayless. And on that note, like clockwork, it's another LeBron post!

LeBron James recently got quite a bit of flak for saying that he and Dwyane Wade probably needed more rest. This led to a lot of outrage, on Twitter and in isolated columns. On The Basketball Jones, for instance, Tas Melas made a strong point that as the best defensive player on the Heat, it's LeBron's absolute responsibility to guard Kevin Durant for the majority of the game. Many made a lot of a fuss over the point that Kevin Durant and LeBron James played the exact same number of minutes. LeBron didn't "look" tired. He was shirking his responsibilities as a defensive player, one could say. And, after all -- he looked fine last night, exhaustion wise. Even though he was lagging defensively and didn't have his legs under him on most of his 4th quarter jumpers. As you may have gathered from my somewhat snippy tone, I disagree with this typecasting. Quite a lot.

Let's go over some numbers.

The takeaway here is relatively simple. LeBron James -- whether the commentariat wants to admit it or not -- has throughout his playoff career undergone a completely unprecedented minutes load for a superstar to play in the modern era. Take whatever stat you want. He's played more than double the number of fringe outlier games with three or fewer minutes of rest in the playoffs than any other player. Every single LeBron playoff run appears in the top 100 for average MPG in the last two decades. He's 5th all-time in career playoff MPG -- and that in and of itself is something of an accomplishment, as in the top 30, only 6 are active players. The game was different when Wilt and Russell averaged 46+ career MPG in the playoffs. The league was less athletic, the toll on the body was less, and the spotlight wasn't nearly as high. What LeBron has done throughout his entire career in regards to his minutes remains absolutely bonkers, and one of the craziest underreported NBA stories of the modern era. 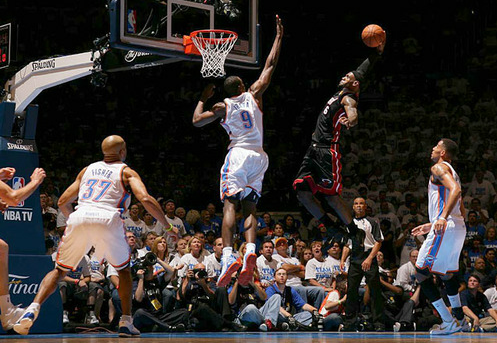 The underreporting of a rather amazing story also leads to some -- frankly -- incredible cognitive dissonance on our parts. We tear LeBron to shreds for 3 or 4 minute lags in a game where he's playing more minutes than virtually anyone on the court. Who's to say that Kobe, Wade, or Melo wouldn't have the same sort of offensive lag if they consistently played this kind of a load? We isolate LeBron for biting criticism because he didn't take on the hardest defensive assignment in every minute he's on the floor, even though he's defending positions 1-through-5 at various points in the game at an incredible rate. I'm not quite as high on his overall defensive quality as most commentators, and in fact, I do think he spent most of this year taking occasional possessions off at a 2009 Kobe-esque rate on the defensive end. But his defensive versatility can't be argued, and it can't be ignored that he gives you more raw minutes of consistent all-defensive team stops than any other prime defender in the game.

It's much like the way Stockton inserted himself into the most valuable point guard of all time discussion -- at some point, if you put together enough all-star caliber years, you've made yourself an all-time great without a single transcendent season. If your franchise drafted Stockton, you've drafted a full 20 years of all-star point guard play and an impossibly strong building block. Is that more valuable than, say, Mark Price -- a player who (for my money) had a better peak than Stockton but only could give his teams about 7 years of prime brilliance? Most would say yes. In a similar sense, LeBron plays so many minutes that at some point you have to give it to him. His defensive performance -- while not in-the-moment as good as Iguodala, Allen, or Bradley -- wins in value due to the sheer quantity of his stops. LeBron is the most valuable perimeter defender in the game not because he's the BEST defender, but because his minutes force him to play so many guys and his versatility allows him to cover so many players that he's able to transcend the small gap in quality through sheer persistence.

But the problem with this is that, as with the examples I began the post with, it makes his flaws all-the-more obvious when he does find himself exhausted. His brilliant defense in the first half of games and his brilliant offensive command of his team will inevitably fade for stretches. Usually these are just a few minutes, but because he spends so much of the game playing at a level we're not used to seeing ANYONE play at, his moments of weakness and exhaustion stand out all that much more than his consistently solid play. With most writers ignoring his minutes load, or rationalizing it (incorrectly) as something that "everyone" does or that something a physical freak like LeBron "should" be able to do, the broader story -- that LeBron individually gives more minutes and production to his team than any superstar since Jordan -- gets lost amidst the mockery over his poor fourth quarters or his "passive" refusal to guard the best scorer in the game. On the offensive end, LeBron uses 34% of the Heat's possessions, and usually plays a key role in the ones he doesn't directly use. On the defensive end, LeBron and Wade are responsible for a defensive scheme that forces them to cover multiple players and stay active.

I'm having trouble thinking of more than 1 or 2 guys who ever had to do in their careers what LeBron is being asked to do every night. Duncan and Olajuwon come to mind. Dirk last year comes to mind, until you consider the defense and contextualize the minimal role Dirk had in the Dallas Defense. Iverson played a similar minutes load, but his defensive responsibilities were barely a thing that existed. Deng plays a similar minutes load as well, but his role on offense is MARKEDLY less than LeBron's, and honestly, I see far more articles highlighting Deng's absurd minutes than I do those outlining LeBron's. Why? Partly because of the star bias -- we remember the minutes star players are on the court more than the ones they aren't, and as thus, we mentally assume that most stars play the same amount. We don't have the collective mental faculties to contextualize the big differentiators between LeBron and other stars, in terms of minutes -- it's the same reason that even when a statistician watches every game they can get their hands on, they still like seeing the stats to see what they missed.

And you know what? This all makes me a bit aggravated. I'll definitely be writing a different post on the matter later next week, but I don't want to beat around the bush -- I have Cleveland roots, and I have absolutely seethed with distaste for LeBron James for the last two years. I can't stand the stupid "get over it" crowd, those who are quick to whine that Cavs fans are too judgmental and mean to LeBron. Absolutely can't stand them. But at this point, I find that I ALSO can't stand completely baseless criticisms of one of the greatest talents in the history of the league. I can't stand the fact that fans and the media have decided to completely ignore fatigue as a real factor, and I can't stand that LeBron is being held to a standard that nobody else has ever been held to in the history of the sport. This overarching conversation has had an effect on me that I never, ever expected would happen. It's made a lifetime advocate of the Cleveland Cavaliers -- a person who (still) can't really stand LeBron James and probably never will -- actually a bit sympathetic to the plight of a millionaire who soullessly ripped out the hearts of his fellow fans on national television. That's ridiculous. The narrative has officially divorced from reality entirely.

And as an NBA fan? Whether I like LeBron or not (and I certainly don't), I hate it. Absolutely positively hate it.

I know a lot of people want to hear what I think about the Spurs series. I'll tell you what kind of a day I had, after my favorite Spurs team ever lost a series I'm still not over. I woke up and called my boss. "DNP-SAD" was my diagnosis. Sat in bed feeling low. Ate a few strawberries. Made my girlfriend lunch. Got up and went to work for a half-day, and did a dang good job because I'm pretty OK at my job. I went to the store. I saw a kid with a Lakers hat. My stomach turned. I cursed. I went home. I played Diablo 3. I got a sandwich, I watched the subject of this post put up a great performance that reminded me of better times in Cleveland, and I went the hell to sleep. So, yeah. I'll write it. Eventually. But not while the wound is fresh. Not now. When it's something like this, recovery doesn't mean forgetting, it means remembering. And there's a lot to remember, for me. So that's that. For now.