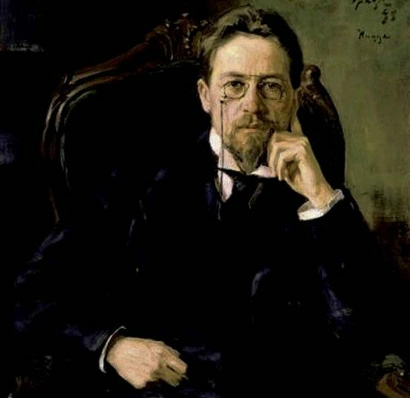 Russian author and playwright Anton Chekhov is one of the greatest dramatists to ever live. Born in 1860, Chekhov worked as a clerk in his father's store, absorbing stories and conversations from every segment of Russian culture. By the age of 20, the young medical student had established that he possessed all he necessary writer's talents: the gift of gab, an eye for detail, an ear for narrative, and a heart for compassion. A prolific author of tiny, clever humor pieces at first, Chekhov (on the advice of a noted writer of the time) began soon to focus more on quality over quantity. His stories grew organically into longer and more elaborate works until the day he died -- even his increasingly-less-frequent short stories became better, more potent, and ever more masterful in their craft. And by the end, the depth of his character studies required plays and novellas primarily. By the time he was struck down by a long bout of tuberculosis at the age of 44, Chekhov had given us an unfathomably long trail of personal letters, stories, and plays containing the framework for much of 20th century theater and short fiction.

In his most famous play "Uncle Vanya," Chekhov shows us Dr. Astrov, a compassionate and humanitarian doctor that knows no rest and whose only spare moments are consumed by an earnest attempt to preserve the forests of Russia for the people 100 years hence. Astrov harshly criticizes the other characters in the play as layabouts with a demon of destruction inside themselves that threaten one another's souls as surely as civilization threatens the forests. Dr. Astrov is basically Chekhov in all these senses. Get this: Chekhov was a fully-trained medical doctor that (as his prime as a writer was beginning) actually took an extended trip to the distant Sakhalin penal colony in the far east of Russia -- regions you'd only know from Risk -- to take a freaking __census_.___ This is Jordan-on-the-White-Sox stuff, except if Jordan were instead going to Pakistan to play cricket because he wanted to find a way to humanely apply an economics degree from UNC. Soon after this (by all accounts arduous and sorrowful) adventure into possibly the most miserable region of Russia, Chekhov went on to become a great and compassionate landlord in the waning years of his life.

Far from the philosophical long-form of his contemporaries Tolstoy and Dostoevsky, Chekhov wrote impressionistic stories about all classes and situations in Russian life. This was no accident: His universal treatment of human nature was deliberate, for it allowed Chekhov's characters, almost from the outset of his career, to speak in his tender humanitarian voice without pretense or prejudice. An imperfect healer of his character's conflicts, Chekhov could put the most soothing, noble words in the mouths of his idealists, even as these characters were bound to struggle to live up to their ideals. From peasants yearning for sustenance to aristocrats in a dying estate to the parties to a love affair clinging to a desperate hope, Chekhov's characters successfully testified to their hopes and failings.

Thus was Chekhov's compassion manifested in his life and works. 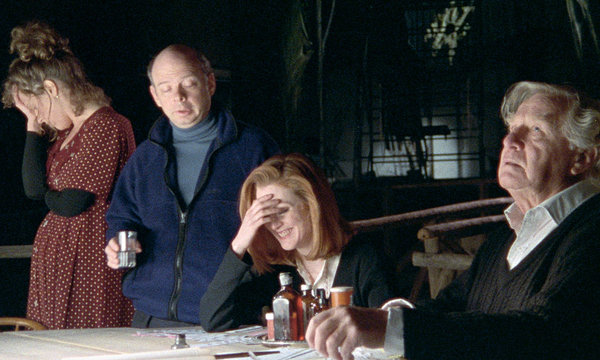 On the other side of things we have Chekhov the brilliant satirist, rational doctor, thinker, and comedian. With the clinical touch of a doctor, Chekhov would - at the end of a dramatic arc - take all of the facts of a character together and pronounce not a final judgment but an autopsy or (most frequently) a prognosis. Allergic to hypocrisy, for example, Chekhov took it upon himself to relentlessly mock the false intellectuals of the poshlust, an infamous class of Russian philistines. Dr. Chekhov had a surgeon's toolkit of sharp, biting irony: Remember the Chekhov-like Dr. Astrov from "Uncle Vanya"? For all his love of humanity 100 years hence, he couldn't recognize present love, lust, or respect towards himself that his deeds and vision had accorded him, as many awkward scenes surely demonstrate. And at the end of the day, Astrov ironically loves instead a woman that could never reciprocate that love within the confines of society and that temporarily mires Astrov in the same demons of destruction he criticizes so harshly.

Usually the characters survive their ordeal to receive his prognosis, for Chekhov loves an open ending in plot terms (in an extreme example, the final paragraph of his most famous short story ends with a look to the"long, long road before" his characters). Unlike Shakespeare, who reveled in the bloodbath of a star-crossed tragedy or a grand wedding in the third act of a comedy, Chekhov simply has his infamous first-act gun (though usually it was subtler than a gun) go off in the third as the exposition's conflict come to a climax and then to some resolution. Simple as writer's pie. And there is no grand epic of a tragic arc, even in the longest pieces. Like Hugh Laurie's Dr. House, the histories and the likely futures of his patients of the soul come up through exploration of the present, and mostly not the other way around. Chekhov doesn't (and doesn't want to) explore their every thought or relation so much as he wants to show us a case study and what we can learn from it. For all of Chekhov's compassion, he is still a surgeon, and there are times when all good surgeons must put away sentiment utterly in favor of the cold, logical, medical realities of their patients.

And yet, even though the stories that Chekhov tells have relatively few (but oh, how poignant) instances of bloodshed and the much more understated and impressionistic plots, I'd say that most of Chekhov's characters have dramatic arcs that encompass great suffering and inevitability and unrealized hopes, all of it rather befitting tragedy. After the early, more jocular stories, you can't go through five Chekhov stories without finding at least five tales of pain, disappointment, loss, and renewals that fail to materialize (even if those are not the only five tales you'll find).

Now, all that said, Chekhov often refers in the manuscripts of the saddest plays to the "comedy" he is writing. He's not just cruelly toying with us: Almost every character in a Chekhov play like "Uncle Vanya" or "The Cherry Orchard" bears some great burden of sadness, and the sadness is explored in depth. But, on the same token, so much of that very sadness is self-inflicted, so many of the reactions are farcical or absurd, and so many ways in which the saddest stories play out are filled with comic irony that you could easily find laughs; that is, if the stories didn't linger so darn long. "Annie Hall," the famed film from Woody Allen, is instructive: Despite its great sense of humor (so many great scenes and lines), "Annie Hall" is ultimately a sad, gloomy tale of a neurotic-but-loving relationship and then the long divorce that follows. In its dramatic moments, the film is almost impossible to bear if you have any empathy at all. Geez; it's like that episode from "Futurama" where that dog dies (spoiler), except extended into a movie with two people and no one actually dies. That said, I don't hesitate for a moment to call "Annie Hall" a comedy, given all of its elaborately realized anecdotes, situational humor and Allen's signature approach to wit and his humorous observations. It's just very honest, raw comedy that doesn't always allow you to laugh along with it. 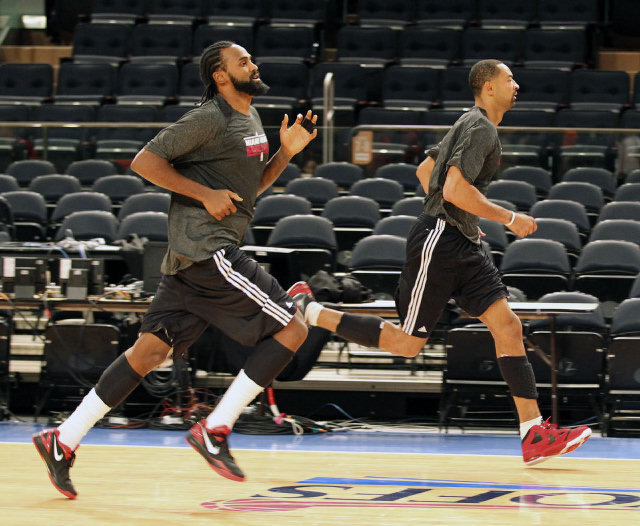 I generally see the NBA in its narratives - even with its grand, alpha-dog swaths of epic drama, even with its thrills of victory and agonies of defeat, even with its archetypal runs of dominance by the best players and teams - more as an understated, compassionate Chekhovian comedy than a grandiose and clearly demarcated Shakespearean comedy or tragedy. The NBA as a sport may have the overtures of a grand Shakespearean universe with eternal culminations and grand proclamations, but in practice, in the everyday fan experience, the NBA has far more to do with the spectacles, the self-deconstructing narratives, the random quirks of players and the stylistic explorations of twenty-four players over a hundred possessions.

An NBA game, for all its billing, often comes out to be more like a sketchy, stubbled battle of the bands than a cosmic symphony of athletic excellence. For every Heat-Thunder masterwork, there's a terrible regular season imperfection like this year's 3OT Heat-Hawks game. And sometimes, the game is both! Filled with wacky characters often from unique backgrounds and with so many poignant backstories, with players that could fill ten volumes of quotebooks if you know the right questions to ask, the NBA certainly passes the "laugh test" for farcical comedy (groan). And as for the rest? Well - as we'll see in Part II - Chekhov's more awkward, verge-of-tragedy comedy is central to my impression that the grand drama of the league is tempered by absurdity even at its supposedly most serious moments.

Because this post is a 4000 word epic and virtually impossible to read in one sitting... see Part II tomorrow!