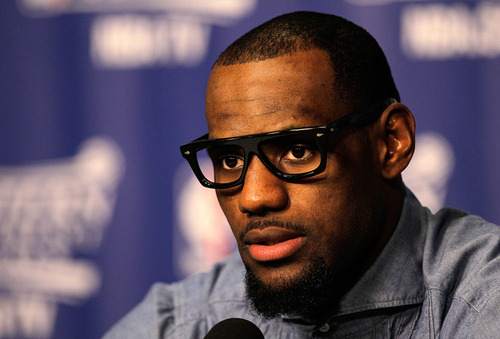 Most of this week, we'll be ceding the floor to our resident Dewey and allowing him to examine NBA storylines through the vise of the first piece in the series, Chekhov's Compassionate Comedy of the NBA. In today's Part II, Alex will examine the complex and Chekhovian narratives surrounding one LeBron James.

To get you up to speed as quickly as possible: In Part I, I gave an overview of Chekhov's life and works, specifically his dual-author persona as both compassionate storyteller and surgical comedian. I used this duality to get at a description of Chekhovian comedy, which blends compassion and absurdity in equal measure to give us an impressionistic case history of its characters, a prognosis, and by-and-large an open ending plot-wise from which we can draw our own conclusions. Then I stated that - on just about every imaginable level - the NBA with its absurd narratives is more like a Chekhovian comedy than a Shakespearean comedy or tragedy. I'd like to expand on this statement by taking on some prominent narratives. Today: LeBron James.

LeBron James comes to mind immediately as an instructive case. In my opinion and in the general opinion of basketball fans, James is the most interesting, polarizing player in the sport -- and almost certainly the best and most athletic player in the world right now. He is interesting for so many reasons: it starts with his athletic gifts that allow him to express himself with seemingly second-order reasoning; that is, LeBron is so transcendent with his athleticism that he may as well be a human in a game of arbitrarily complex robots. His actions on the court - unlike the "efficient," "smart," and "creative" labels we generally reserve for lesser mortals - casually get sophisticated labels like "ironic," "enigmatic," "uncategorizable," "witty," "disappointing," "astonishing," and "brilliant."

And that's not the half of it: his narrative arc itself - starting some time around his discovery as a teenager and ending with his death or the death of civilization, whichever comes first - feels big and higher-order, like we're telling the story of an entire, second species through its archetype and only member LeBron. His narratives are simultaneously so alien, so familiar, and so overwhelming that we've reached a surreal stage where LeBron can do something fantastic for an entire game with his season on the line (like Game 6 against the Celtics), and the inertia of so much prior spectacle around him (like that other Game 6 against the Celtics) will immediately and ridiculously wash over the accomplishment, deconstructing and subsuming -- or even forgetting -- the latest gem. Our culture's reaction is something like an amoeba eating random chunks of nutrients, always growing, always moving through space, always changing to reflect back on all of us. It's like watching history in both its infinite malleability and its endless path-dependence. That amoeba was going to eat a Game 6 in some form, come hell or high water.

And then there's "The Decision." 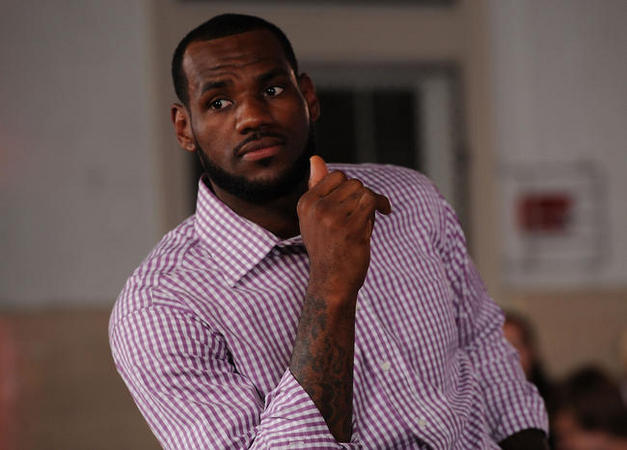 Chekhov shows us a large cherry orchard into which a woman (now on hard times, but from aristocratic roots) pours all of her sentiment and pain and nostalgia, and precisely because of this sentiment and nostalgia never addresses the simple business affairs of the orchard's estate, and so allows her childhood orchard (and her childhood estate) to be bought and sold pitilessly to a former peasant with none of this sentiment or nostalgia. And yes, her story taken together is heartwrenching, Chekhov calls it a comedy, and he's right. LeBron showed us a twisted inversion of "The Cherry Orchard" two Julys ago. Even though "The Decision" was easily one of the more dramatic moments in American sports history (with a whole lot tangible and intangible hanging in the balance), it was filled with dark comedy: Even beyond LeBron and Wade's infamously facetious "make your pitch, guys" tour of various teams in the week prior, the program itself had LeBron wearing a pink, ridiculous shirt, talking about doing what was best for him (Really, LeBron? I thought I was watching "The Sacrifice"!), and treating it like those old "Fact or Fiction" shows on Fox or those "trailers that will appear sometime during this program" where you needed to wait to the end to get the answer.

The unfathomable amount of dramatic irony, extended to comic proportions, came from the fact that he and his handlers were apparently the only people on Earth that did not understand that he just needed to treat it like a solemn, respectful parting of ways. If he had simply gone up there with a straightforward case to the American public about his decision, then all would've been quickly forgiven (if there were, indeed, anything to forgive), and no one (other than a few Cleveland fans that [fairly] bought into his "hometown hero" approach) would have held it against him. To top it all off, someone decided to donate all the proceeds to charity, as if someone knew what would happen and exercised damage control but was powerless to stop the spectacle.

But for his ignorance of the fan's mindset LeBron was punished, again, with comic and unreasonable severity by those same fans: his wording in that program and in the ensuing celebration have launched a million seedy and bitterly ironic comic take-offs, and I don't know that any of the responses came close to the sheer comedy of the original telecast itself. Jokes and narratives that hit home regarding "The Decision" seemed largely to recreate it in its surreal splendor and to help us wrap our minds around the spectacle's enormity. This is all high comedy, and even if we can't fully muster a laugh ourselves, the gods with their infinite time and trademark British appreciation for irony are finding this all quite amusing. Do I even have to add Dwight Howard's situation? "The guy who tried to make everyone happy in small ways but missed the big picture and thereby cast himself as a villain." It's straight out of a Christopher Nolan "Batman" film. Only it's hilarious. That one off-cuff interview could practically stand in as the definition of "dramatic irony" in a freshmen English course, and it came out of nowhere.

"But, Alex," you might say, "this is just the spectacle inherent in the business end of things. It's one guy, making himself look foolish. Of course there's comedy in the embarrassing spectacle. Talk about the basketball. Life is earnest, life is real, and the grave is not its goal!" I'd agree... except that the spectacle simply doesn't end there: even LeBron's purest basketball narrative, taken completely on its own terms, is never actually going to have a culmination and instead will fester in comedic (but compassionate, you understand) ambiguity until the end of his career. Let's be real: What really happens when he finally gets that first ring? Does all the noise against him stop? Do you think LeBron's going to stop going for rings, or that LeBron will stop having those completely absurd and inexplicable gear shifts that have maddeningly defined him and simply win rings without conscience for a decade barring injury? And do you really think his first ring will retroactively validate everything that came before, or that his failure to get a ring thus far has retroactively poisoned that game against Detroit? Perhaps. Or maybe Kobe is still going to be Kobe, flaws and all, and LeBron then is going to be LeBron now, flaws and all.

Flaws and all, these players are who they are and, like us, they change incrementally through conflict and feedback. I think NBA history tells this story mostly without exception. There is no light switch, just a constant grind for improvement and (generally speaking) a much faster change in scenery that comes with aging and roster churn. There's no end, no culmination in that process, no enlightenment, and, if there is, it wears off just as quickly with the struggles of age and injury, and soon the perfectly-validated champion is a goat and a second banana six years later for honestly marginal differences in approach. I see you, Dwyane. No, LeBron's long, unfathomable journey is not going to end with that first ring, and most of the change will be in ourselves, pretending like he totally changed his approach instead of finally finding four reasonably favorable matchups and a suitable supporting cast. 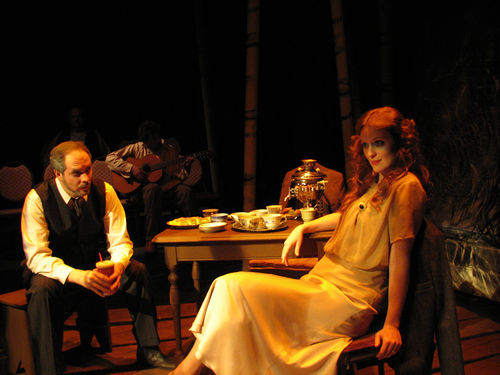 Like the multiple loops in that sick hip-hop instrumental you like so much, Chekhov's characters in "Uncle Vanya" are sitting in the exact same spot at the end of the play as they were in the beginning, with the characters that had appeared during the play having disappeared summarily, with only a tearful, whispered testimony to tell us that something has changed over the course of the play. Then it's back to endless, relentless, thankless inventorying for a dying estate. That's far closer to the narrative of an aging player looking for a ring than any sort of Hero's Journey.

Michael Jordan didn't go home after the legendary win in 1998 and just decide to stop being pathologically competitive. If you challenged him to billiards the next day, he'd probably take you up on that, and maybe you'd want to put your money where your mouth is. Tim Duncan didn't learn to defer these last few years so much as he'd always known how to defer to his coach and his management and his role players while he built his teams up socially and on the court. Now he's just deferring a little more on the court. Dirk took over last season not because he figured something out about toughness or pressure, but because Dirk has been taking over games since 2002, and the Mavericks finally got a great defensive center and an unstoppable play to help him put it all together for a title run. For Kevin Garnett, the drive never stopped when he won, he just wanted to win again and again, to increasing and increasingly brilliant futility. (And bark like a dog, too.)

All these players enter the stage from unknown lands and exit to unknown experiences, their experiences mostly centered on building working relationships and managing and understanding stage fright in its full psychophysical generality, and zone defenses from time to time. They fight for our entertainment and dollars for 15 years, change with the flow of eras and surrounding circumstances, develop with us, and then you wake up one day and they've retired, gone to China, or died. There is no third act to these players. There is no first act. Or, more precisely, the first act is always on the sleeve, the third act on the back of the neck. If you could draw it you'd see Chekhov's gun, semiautomatic with fifty bullets a day in the clip, one hundred reloads a year. The trigger is always there in the adrenal gland, always glad to be pulled by the drama to take us from Act One to Act Three in an always-already instant of impressionistic glory and humanity.