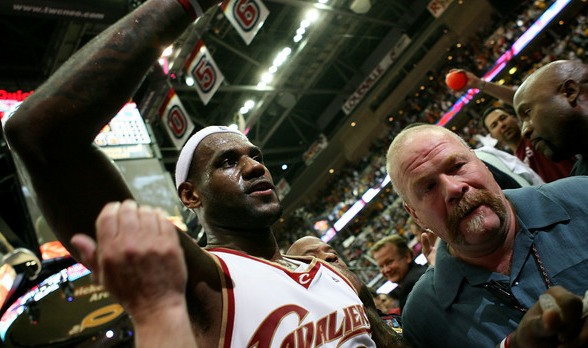 Heartbreak. Noun. A special pain, reserved only for those who care the most.

So blurry, yet so clear. A lawnmower, a mailbox, a white picket fence. A teacup pig, amidst a menagerie of lovable creatures. A kick, a cry, a child. Future, family, friends. Lunches at home, vacations to paris, a wedding. These are things -- previously discussed, dissected, distended -- that flooded my thoughts after the words flashed across the screen. It was a silly time to reflect on that. We'd had about two years to think about those kinds of things. But no longer. She would not vocalize it. She would not say it over the phone, not this time.

"Aaron, I don't think this is going to work long term." We talked. I sniffled. She left.

And things fell apart, as they are wont to do.

The year was 2009. I sat slumped in my couch. That year's Cleveland Cavaliers -- the greatest basketball team my adopted sporting home had ever seen -- were no longer. LeBron James walked off, refusing to shake the hands of his betters. I agreed with him, and I seethed with righteous fury. I wrote text file after text file comparing him to Jordan. I wrote screeds about why Mike Brown wasn't as bad as people said. And I watched helplessly as an overmatched Magic team was crushed by a Laker team I felt was the equal to my Cavs. Because the Magic -- while they won the series -- were not better. Not to me. They were a team whose three point shooting got incredibly hot. They were a great team -- one now horrendously underrated -- and certainly as good as the Cavs. But not against the Lakers. Not against a team like that, with those weapons and that defense. But the Cavaliers defense, against that Laker offense? LeBron James, guarded only by Trevor Ariza? The series would be close, it would be seven games. But it would be a Cavaliers title. I really believed that. And somewhere, deep inside, I still do.

And don't think the dreams end with the broken heart, they don't. I still had -- and sometimes, in a sick twist of my mind, still have -- dreams. They featured vivid, pulsating dreamscapes of the Q. A crowd so loud your vision gets blurry. The confetti paper -- wine and gold -- falls from the rafters, but the rafters open, and it falls once more from heaven. LeBron and Mo hugging as the confetti fell. Zydrunas Ilgauskas staring up into the rafters and soaking in the roar of the crowd, as Kobe and Bynum looked on. I imagined David Stern, coming out and presenting the trophy -- Mike Brown chortling, the young cad. Ben Wallace, Delonte West, Anderson Varejao. They all pose with the trophy, and LeBron smiles. They take fake pictures with the trophy, as they did when life was fun. They grin and bear it as reporters ask inane, babbling questions. They walk off into the sunset, the team forever marked in history -- years later, when all the players have retired and the game passes them by, the bond remains. A 50 year old LeBron James goes to a team reunion party. They smile, and pour some champagne. It tastes the same as it did then. They talk of their younger days -- the wild ones. They were great, once. They were champions, and nobody will ever take that bond away. But there is a cold sweat in my dream, and my lips are parched. I thirst. And I just wake up.

It's never true. It was not to be. And it never will be. 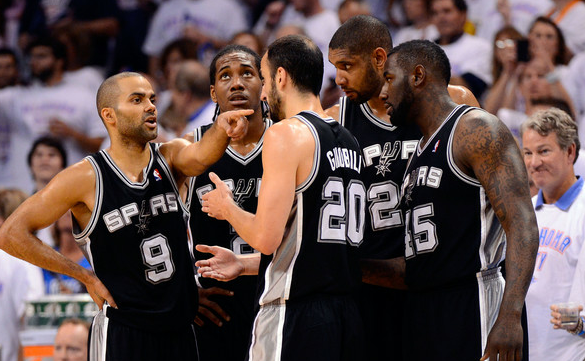 The year was 2012. I sat slumped in my couch. That year's San Antonio Spurs -- the team I'd loved more than any team I'd ever had the blessing to follow -- were no longer. The feeling was familiar, the stinging pangs of despair and desolation. And, of course, anger. The one-sided refereeing, the Thunder fan mockery, the constant drumbeat of trolling and vitriol over Twitter -- less than a week after the Spurs brought the entire basketball world to a collective paean to the beauty and wonder of their offensive might, analysts dissected the team. The verdict, as I fumed and steamed and pounded my fist into rocks? "Simply not that good." It can't be that the Thunder -- a great, wonderful team -- had some hot games and got some contributions from their role players I felt were absurd. It's impossible that in a bout between two evenly matched teams, four games of uneven calls could tip the balance. There's no way that the Spurs' defensive problems were mainly magnified by things like Ibaka's perfect night, or that a just-as-poor Thunder defense went on an unprecedented hot streak. Sports is about winning and losing. It is about heroes and villains. The Spurs were the hero, then they were the goat -- they were the losers, so our amateur historians saw fit to bury them amidst the glassy sands on the island of misfit teams.

But these Spurs were my winners. They were my favorite collection of players I've ever followed. They were a beautiful achievement in movement, and a system, and a blossoming of Popovich's incredible ideas into a new and fearsome reality. They dominated the league in a way that no offense-focused team ever seemed to do. They redefined what basketball meant, for a time, and they spent so much of their time teaching and helping people learn about the game. They were my wonder, my steamboat in a bottle. I came home every night for over a month to a new Spurs victory, or accomplishment, or something. I won back my faith in a team -- the 2009 Cavaliers had broken me, and my bittersweet dreams of their brilliance made me wary of every thinking I had a team good enough to win it all. A team that would bring back the feeling of being on top, of watching my favorite players hoist a trophy and celebrate. I resisted for so long, but the belief grew. The belief that there was truth to the Spurs -- truth that was not simply mine. To their style, their gravitas, their accomplishments. I thought there was a truth that would make them show everyone their glory.

It's never truth. It was not to be. And it never will be.

And then, there's me.

Sports dreams are sports dreams. Life dreams? So, so different. The stakes are higher, the love greater, the investment so much more whole. With a team, you simply dream of happy memories and a public understanding of why you love your team so much. You dream of being a part of a whole, a cog in the giant machine of your favorite teams. But when you dare to dream for new things, for better things, in your life? You are not a part of a whole -- you dream to be whole. To soothe another with your very presence, and come together to create a perfect whole. As I reflect on our relationship, I realize I didn't have that. Not yet. I felt we could, and that it was something we could've done. But it means little now.

The relationship is over. I cried. I panicked. And now, I enter that fugue-like catharsis of regret, and recover. I am young. I am smart. I will survive. In the ruins of my dreams and love will someday rise my better. A better mate, a better man, a better me. But today, I am not that better man. I am feeble. I am weak, and I am sad. I lie awake remembering the dreams I had, not the dreams I've yet to make. And yet to break, too -- this is hardly going to be the first time I rend my heart, or break a dream. I remember the dreams that came before the latest in my assembly line of the old and cracked. I try to piece them together, to make them whole again. I try to take in the hope and wonder I felt at this year's Spurs team. I squint and lie awake and think of the Cavaliers long-past. I think of other girls, the ones I left behind, and I think of the things I can do in the future.

But it all comes back to the horrible truth; what's broken is broken. Gone is gone.

The lone and level sands lie silent in their wake, mocking me. I have the strength to retort no longer.

Heartbreak. Noun. A special pain, reserved only for those who care the most.