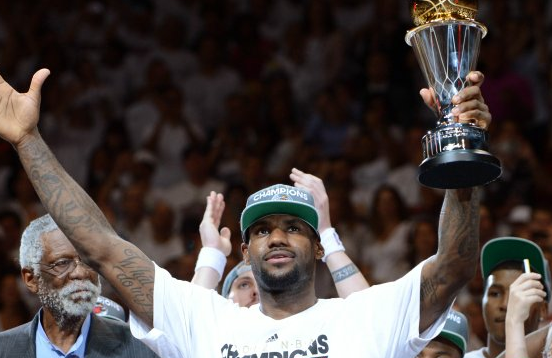 Nature, nurture, heaven and home
Sum of all and by them driven
To conquer every mountain shown
But have never crossed the river
Braved the forest braved the stone
Braved the icy winds and fire
Braved and beat them on my own
Yet I'm helpless by the river

Angel, angel what have I done?
I've faced the quakes the wind, the fire
I've conquered country, crown, and throne
Why can't I cross this river?

In terms of raw talent and ability, LeBron might be the best player to have graced our game. The questions always concerned his psyche, his drive, his motivation. He won trophies, accolades, but always lacked the one attribute everyone associates with the best – those damned rings. With expectations from his rookie season, being a star from age 16, it’s hard to say whether he ever found himself within the huge body he inhabited. I know that when I was 16, I was pretty confused, and I didn’t have a documentary about me anywhere. I’m not a student of psychology. I don’t know LeBron. But from my (albeit limited) experience, I can tell you: that much attention, that much hype, that much expectations? Never does good for a person’s personality, never. Especially one that never had much of a life aside of them. And yet, he played through those, and yet he dominated, with no regard for human life. And the new basketball great showed he was ready to become the new basketball legend.

But in Cleveland, he failed. I’ve never seen it, blame lowspeed internet and lack of exposure in Poland. But I’ve heard. The comparisons to Jordan and Kobe, the resulting Decision, a rather ill-fated attempt at a charity event, and then? The most annoying welcome party ever. It seemed like the unstoppable force entered the NBA, with the arrogance of an annoying prizefighter, we were ready for a new era. LeBron climbed all the mountains, but he couldn’t pass that one river that separated him from the championship. Nothing illustrated that better than his struggle in the Finals last year, and his rather shameful “y’all gonna live the same pathetic lives” skit. The frustration and pain was evident, and the ever-present narrative of “not clutch”, magnified. With the lockout looming, it looked like we’d be hearing a lot of it without anything to counter, while LeBron went to work on his game even further, expanding it into something that is legendary.

Fast forward one year, and LeBron sits before us, having exorcised his demons. In sports, winning cures everything, from softness to unclutchness, from indecision to the Decision. The most annoying narrative in sports turned into a redemption tale. LeBron, from angry, to calm and happy, from arrogant to humble, from his haters “returning to pathetic lives”, to “the only thing that matters is that I’m a champion.” Tonight, LeBron passed the river, humbled, and with a burden off his chest. He’ll probably go back and forth across it a few more times, sometimes falling into the deep waters, sometimes going back over it again. It's the way of the game.

On the night of June 21st, 2012, a Midsummer Night’s Dream came to be for a group of men. One of these men just placed his first step on the path to a heavenly basketball throne, killing one narrative, while creating several others. He is no longer the angry, lost young man that told us all to screw off last year. He's changed, a bit. He's now a confident, calm and happy person -- that, more than anything, might speak more than any of his evolution on the court. And in all this mess and commotion, one quote stands out above all.

We'll look back someday and chuckle. It was only a matter of time, after all.