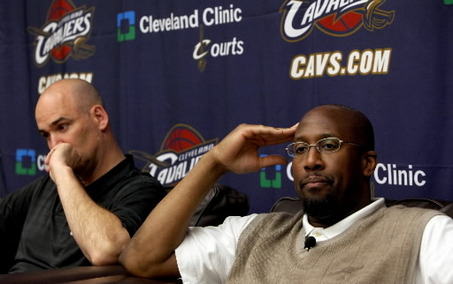 Let's say you're a GM for an NBA team. Your team just came off a dismal 25-57 season, which is probably about right given all the D-Leaguers you called up near the end and the decent-but-flawed players at the top of the roster. Particularly the injured ones. All that sound and fury, signifying... the fifth pick in the draft! Your owner is excited, you are wary. As expected, on draft night, the top three players on your draft board are gone after the 3rd pick. You know where the 4th pick is going, so you cross that guy out too. No matter, you weren't really expecting anything different. But you look on that sparkling fifth pick with indecision even at this absolute moment of truth. Maybe this is the year you hit lucky five, where (by sheer coincidence) several present and future HOFers have landed.

Because, really. Look at the history! Maybe you'll get Kevin Love. Or Kevin Garnett. Or Ray Allen. Or Dwyane Wade! Devin Harris wouldn't be so bad. All of them (including Scottie Pippen and Charles Barkley) were 5th picks at one point. Statistically the fifth pick is the only one that has yielded close to the All-Stars as the big #1 pick in the last 25 years. You didn't know that until a few days after the lottery, but now it feels like the only thing you've said in years. Your mind dances with one part anticipation, ten parts dread. Your reputation as a GM is on the line, and you might lose your job when all's said and done if this pick never pans out. Nothing like playing roulette with your job, right? You find you have two realistic options. Open the doors, Vanna.

Here's your first stop. A lengthy defensive wing that spent 4 years at a college known for scrappy work ethic and virtue. You know that Option #1 can defend the 3 and the 4 really well. He has a tremendous work ethic, and he'll be a solid NBA player for many years (so long as he's healthy -- luckily, your scouts give no indication of an injury risk). The only problem? Well, he's not that quick, and he's not that long. His defensive instincts are tremendous -- Shane Battier with some gruesome length -- but that's all he brings to the table. His offense is barely passable, showing rotation-player stuff at best. He doesn't have a jump shot, much less a corner three. And, obviously, you aren't the Spurs. His offensive upside as a vet is something like rookie Kawhi Leonard (intelligent, some driving ability, a 3-ball-corner-pocket to keep defenses honest, decent vision).

But his rebounding instincts are undeniably subpar and his 5 rebounds per game in 35 minutes as a college four suggests he'll always be a liability. Perhaps the peril and the promise of Option #1 is his mind-numbing and undeniably valuable consistency. His college numbers paint a freakishly uniform picture - defensive tenacity and intelligence, bad rebounding, vaguely-passable offense. Every game, every second he's out on the floor you get this. You figure if you take him you'll certainly make your team 5 wins better and make your differential a point or two higher, for about 5-7 years (maybe more) until his expensive free agent days come and his legs start to slow down. Your fans will complain about his rebounding and wish he could give you more, but overall they'll respect the work he puts in. Not bad. You probably won't regret picking Option #1.

Option #2 is a bad dude_._ To prove to you how much of a bad dude he really is, he spent a single year in college and played terribly. Didn't produce all that much, is what we're saying. You don't know his deal. He's showed up at all your combines with a mixture of intelligence, vigor, and earnestness. That was cool. He also fully utilized every single combine to show you the fundamental inferiority of his current skillset. That was not-so-cool. But the upside? Considerable! Option #2 gets physical comparisons to everyone. Dwight Howard to Chris Paul to Elgin Baylor -- confusing, yes, but they make total sense when you see him play. Yet, in the next sentence, a litany of warnings pour forth that this guy might just be a huge Kwame-style draft bust.

It's speculated by these scouts that while Option #2 is an intelligent player and his physical attributes are undeniably unique, Option #2 will probably never reach that plateau of talent his upside demands. His one year of college wasn't just disappointing in the averages: it was extraordinarily high variance, filled with insane displays of athletic brilliance that left their spectators in awe of this Olympian that were followed two possessions later by tripping over his own feet and airballing free throws. At the combine, while you saw the good side of his personality, you never really saw the Olympian rumblings. What you did see wasn't encouraging in the slightest. As far as you're concerned, Option #2 failed the final exam. The most important thing in the NBA is consistency (hello, Option #1!) as all your wily veterans will amply attest when asked. 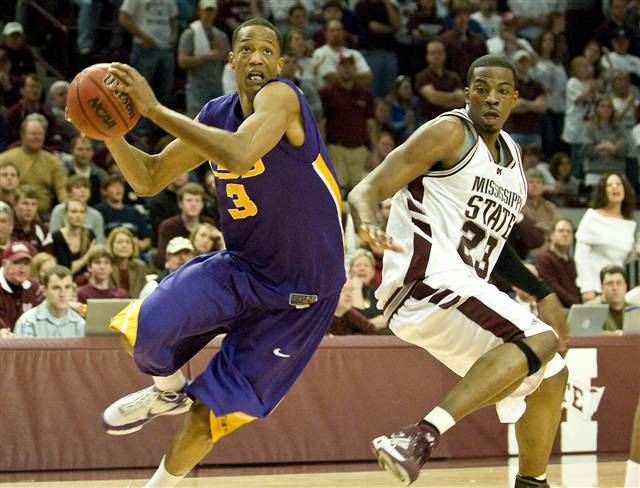 Your stats guys -- all of whom backed up your intuition -- give a 10% probability on the premise that Option #2 is a once-in-a-decade type talent, with the potential to be the evolutionary Scottie Pippen or the evolutionary Dwyane Wade. Both of whom were, well, the #5 pick in their respective drafts. There's even a small percent chance that Option #2 is simply beyond compare; the chance that Option #2 is the first in an evolutionary line of a world crushed under his making. The things Option #2 can do on a court rival what any franchise player in the league can do, after all. Which is all well and good, but rather dwarfed by the 50% chance your stats guys give you that he's simply NBA jetsam, a rotting waste of athletic genius and your coveted draft pick. In the final 40% he's just another infuriating marginal All-Star or 7th man that just kind of hangs around for five years and brings crowds just to see him in that brief garbage time spectacle. Anthony Randolph, Tristan Thompson, the like. You run the numbers again, and again you find what you'd calculated 1000 times. Option #1 is the clear-cut winner on average. He makes your team a lot better at the 3 or 4 and you could tell your owner (truthfully) that that position is above average.

Option #1 is buying insurance; Option #2 is putting your existing insurance in the mega-millions. Easy.

But before you click the trigger, you stop and mull it over. You think to yourself... What if I had to make this same choice 10 drafts in a row? That is, for ten drafts, you had the #5 pick and you picked the same archetype you picked this year. You stop. Ten players like Option #1 would be great, right? Well, except that you wouldn't have an offense. Your entire team would turn into a contender-feeder for a few years, just trading and developing successive combinations of "Shane Battiers with gruesome length" for more players and picks. That wouldn't be bad, all considering. You'd probably keep your job. On the other hand, 10 players like Option #2?... Well, you suppose you'd get to play the odds and on average one of those ten would be that once-in-a-decade player.

You gulp. That one guy would make the other nine Option #2 clones -- as well as your 25-win team -- into contenders in two or three years. What's more, you're a thinking man. You tend to see the contributions of players in a game, series, or season, as being of the Pareto distribution mold, where 20% of players are responsible for 80% of the wins, and Option #1 will never be that guy... Option #2 has the possibility to be_. There's a one-in-ten-chance_. Sure, if you were making that same choice for ten years, you'd probably be fired. But your team, and your owner, would be building for a title, and for greatness. Not just building for being the next in a long line of oh-so-close Houston teams, unable to evolve into even a relevant team. And that's what troubles you.

In the end, you pick Option #1. This isn't a fun little mental exercise, or a quirky stat project. No, this is real life -- this is about keeping your job. Plausible deniability will always be there, and the on-record quotes from your hoopshead luminaries about Option #2 as a Kwame-level bust will always be there. You file them away in your secret locked cabinet of job-defense documents. Don't laugh. It'll be there if you need it. But after this solemn consideration you've thought through a thousand times and expressed to your ownership with the nobility of a man obsessed, you know in your heart of hearts that -- if you were only about the team -- you'd have picked Option #2 in a heartbeat.

Really. Bust or not. Because you've got 9 to 1 odds on 12th place magically turning into 2nd place. That's worth everything, in this league. But you didn't. You went safe. After your pick, you go home to watch tapes of Option #2 stinking up the second combine. You laugh. You drink. You laugh some more. And then you get a draft alert for Option #2, and on force of habit, you check it. Your eyes water. In a draft-day trade, the Spurs acquired the 13th pick for DeJuan Blair and Gary Neal. They chose Option #2.

Seconds later, your Blackberry meets the pavement. You live on the third floor.