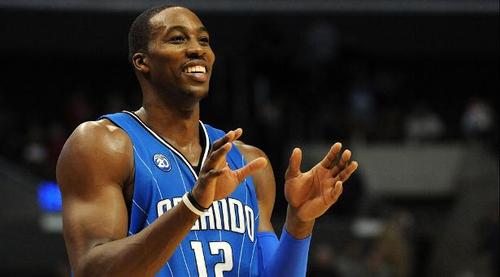 "They didn't let me push them around." could be a summary of Dwight's plea to the NBPA. Twisted, turned and hyperbolized, Dwight came out accusing the Magic of blackmail, while another collective "LOL" and "WUT" descended upon the twitterverse. Had this been the pre-Web 2.0 Dark Ages, the editors would've probably double-checked the story before printing it in tomorrow's news. But today, as information becomes moot with every minute, those with sources have no such restraint. They'll throw whatever their sources tell them out to the masses, which will be subsequently reposted, reinterpreted in a thousand of ways.

And as the story of Dwightmare 2: Electric Boogaloo unfolded, I wanted to write an instant reaction, just as many others. Because waiting? That means that the interest goes dry. Waiting means that people probably already said what you've wanted to say independently. Fast wins, and when a few days later something changes, you always have an excuse for your too-quick reaction post.

Now that a bit of the fog of war has cleared, we know one thing. He never said "blackmail". And while it might be an unimportant detail in the big picture of his treatment of Orlando, it's also a tweak to his image. Still egoistic, but not insane. Still a child, but not as annoying. The rationality of his argument, the intent of his actions seemed to hinge, at least to me, on that one word. Suddenly, my whole perception changed; he went to get advice, rather than to blithely attack the Orlando Magic. He was just looking for a way out of this situation, rather than doing stuff best described as "literally insane." What's the truth? How should I know? Unless Dwight Howard is our source, it's all speculation.

All that said, Dwight remains our villain. He gave Orlando hope just because he didn't want to be shipped out anywhere else but to New Jersey. He could've left in Free Agency, yeah. But a 5-year contract was -- evidently -- just as important as reaching the promised land. It's really hard to empathize with an annoying dude earning millions of dollars, especially when he's acting like a spoiled brat. Still, I don't really feel significant anger towards Dwight. Not as much as pity.

Dwight is a part of a rare (and dying) breed in the NBA. He's a superstar drafted out of high school, he's been a superstar since day 1, and he's probably going to be a superstar when he retires. As I mentioned in my recent LeBron James piece, while a lot of people probably think that it's fun to earn millions at the tender age of 18 (and doing it through the sport they love, too!)... I don't really think so. Not with the scrutiny of today's sports world. It's much akin to a life of a Hollywood celebrity, only they don't get death threats for missing free throws instead of passing on a role in a deranged fan's favorite reboot. While these celebrities fall into addiction and depression as the result of their fame, NBA players generally don't. Maybe it's because they're famous at a different level, or in a different way, or maybe because they don't spend their lives having to pretend someone that they're not. I don't know. But for the most part, NBA players deal with it.

So, here's Dwight, an 18-year-old baller, making decisions. These are decisions that change his life. I remember when everyone around me told me that my IB Diploma exams could ruin my life. I can't even imagine what a choice between going to college and going pro must've been like, even if it seemed easy on the outside. After all, everyone in his big family wants a piece of the cake he'd bring home. From there, it's just more and more people banking their hopes on him, some financially, others in a fan-capacity, but whatever it is, it's always pressure. And it's not just Dwight*.

* I'm not trying to suggest that the early-entry is to blame for Dwight's behaviour. This happens to one-and-doners, two-and-throughers, juniors and seniors all. It's just that it seems to me that college is a very good adjustment period for the fame to "kick in", if you will, an adjustment period that Dwight, LeBron, Kobe and others never had. They were thrown into the deep waters straight away, and that's not all that easy, I feel.

I've already discussed LeBron, noting how the decision and a post-heartbrake outburst were the biggest gaffes of his career thus far. One of them, I'd always felt, was an unintentional faux pais. I doubt that LeBron, with all his faults, would want to rub in the faces of Cleveland. Or maybe he did. The conference seemed to me to be the plea of a frustrated man, and beneath the venom, there was a snippet of truth. Almost everyone was surviving a moment of Schadenfreude at the expense of one man that never really wronged us, but simply pissed us off by teaming up with some other good players.

And LeBron's not the only one struggling with his own ego, Kobe had a Battle Royale with Shaq and more than a fair share of outbursts before he matured, while Kevin Garnett seemed to focus all that negative energy into his on-court persona. In Dwight's case it's not an outburst, or a weird on court persona. It's not a single gaffe or a big P.R. misstep. It's something much more fitting his goofy charm -- it's this spoilt, child-like conviction to get what he wants no matter the cost. When someone stops him from doing so, he seems to play the victim, losing sight of rationality.

And in all that? Dwight just seems lost. Just like it took time, mass hatred, and a myriad of defeats for LeBron to develop, Dwight needs more time. He's a victim of fame, as much as he is a villain. He will be hated by Magic fans, and people who hate to see behaviour like this, and (in time) Dwight will be loved by the franchise he commits to. And in time, he'll realize what he's done wrong, and rather than beg forgiveness, take a lesson for the next time he'll be in a similar situation. Just like a regular human being, which must be said. After all, think of how often we forget, that these marvels of athleticism and skill we observe through our magical machines, are people just as much as we are.

So no, I don't hate Dwight, and neither should you. You may dislike what he does, or his approach, but in the end, we should cut him some slack. Not despite him being a famous basketball star earning millions of dollars. Because of it.

Stealth reminder from Aaron: tomorrow, we'll be doing a fourth-of-July Statistical Q&A. For those wondering what those are, check the first installment of the series. General discussion topics will be the cap, free agency, and next season's predictions. These Q&A sessions are only as good as the questions we get, so we hope everyone comes up with some great ones. You can start sending questions today on twitter -- just send them to @docrostov or with the #gothicginobili hashtag. See you tomorrow!