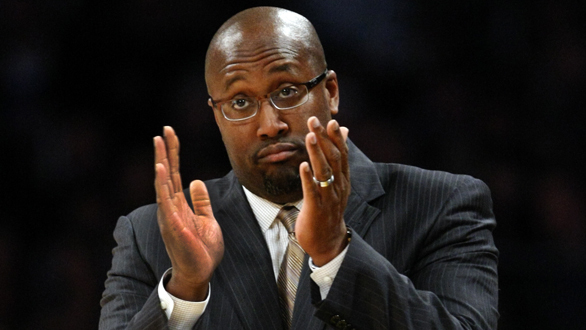 The internal monologue of Lakers head coach Mike Brown was always full of cuss words. Much like our own spatial universe, the space that Brown's cusses inhabited was both infinite and always expanding. Also extremely confusing. Tonight - after midnight in his busy den - the cuss stream burst audibly from his blowfish-esque brown cheeks. I can't honestly say that I'd fare any better in his dilemma, though. Consider that just weeks earlier, the Lakers had signed Steve Nash, perhaps the greatest floor general that basketball had ever seen. This in addition to the Lakers' franchise player Kobe Bryant, perhaps the most skilled isolation player that basketball had ever seen. In addition, several of the Lakers' cornerstones intimately knew the Triangle Offense, the most successful team offensive concept that basketball had ever seen. The team's four cornerstones (Nash, Bryant, Bynum, Gasol) came from four different countries, four different cultures, and four different skillsets, each a genius of athletic achievement in their own respective ways. Most coaches would be ecstatic at this development.

"That is, until they ran the numbers and figured out what all of that actually means," Brown said joylessly. The task before Mike Brown was monumental, and whatever he decided would require innovation on his part and adaptations for his players. A lot of dismal days of patient frustration lay ahead for the Lakers. Still, with his trademark persistence, all the problems of an NBA offense started to make sense to him over the course of the night, and all the mental jetsam discarded in his den's gigantic novelty royal-blue recycling bin started to look better and better until they became literally reusable in Brown's new sets and schemes. From the white boards, a well-used protractor, and forgotten tomes of Phil Jackson strewn about the study, Mike Brown cussed out an entire offense that night. He wasn't confident at all in what he'd invented, but it would have to do, he supposed. At dawn, drinking some coffee and doing a compulsive ritual before the front door, the inventor of the Circle Offense hurried to a 9am presentation of his offense. Soon, he supposed, the Los Angeles Lakers would have to learn to form the Circle at a moment's notice.

"And that's every option, every cut, every set: Everything you need to know about the Circle." As Mike Brown finished his presentation and turned the lights back on, the Lakers noticed to their amusement that Mike Brown had a measure of chalk on his hands and his face, though he had been working on projectors and whiteboards. A close observer would note the nearby bowl replete with donut holes. Brown himself pointed out the donuts before anyone else could.

"These donut holes are spherical. If we were playing four-dimensional basketball, the Circle Offense, in point of fact," Brown noted proudly, "could easily be made into a Spherical Offense. Eh heh heh heh." Brown's chuckle - now so familiar to the Lakers' ears - was obscure and self-aware but undeniably contained a large measure of mirth. The Lakers could rarely tell in advance when Brown was telling a joke or - after the fact - what the joke had actually been. They often wondered if he was even laughing at what he had said or something completely different. Brown continued chuckling for a few minutes, perhaps to ensure everyone forgot the joke entirely, staring past his players into a blank corner on the far side of the conference room. Finally, he turned his head to the assembled players for one last detail.

"By the way, notice that the Circle technically starts right when the ballhandler is three feet from his defender. That's the 'moment of truth' I had mentioned, Steve and Kobe. You see that?"

"Yeah. Seems familiar to some offenses I've learned before," Kobe said with a diplomatic grin, "I think I can probably figure that part out."

"Oh, really? That's nice. Anyway, that's the presentation. So, any questions about the Circle? I want to start drilling tomorrow, so now's the time!" Brown said with open relish.

"Why, thank you, Steve! I worked on it the last few months! I'm glad you apprecia--" Brown lied defensively.

Steve wasn't having it, though, and continued: "...But for the sake of Kobe, Pau, and Andrew, I feel I should ask: Coach, did you basically just steal the entire Triangle Offense and move two of the players in the Triangle slightly to look more like a giant circle?" The five-hour-long presentation had finally sanded down Steve's great reserve of patience and he forcefully stated the obvious. Kobe was surprised that Steve of all people was so outraged. He thought, "Hadn't Steve played with Shawn Marion and Boris Diaw and Joe Johnson and Amar'e... like, when his teams were good?" Kobe would always bring up Kwame Brown in interviews as a mental shortcut for total incompetence and deferral, but Kobe visibly shuddered just to think of all the D-Leaguers that Steve had carried without complaint. And Mike Brown had finally worn that patience away.

Every Laker save for Steve was blinking wildly now, both in astonished anticipation of conflict and in enacting the opposite of the actor's trick of holding the viewer's attention by rarely blinking. Kobe's facial expression was frozen as his head slowly swiveled from east to west, about an inch every ten seconds. "No." has never taken so long to express. Mike Brown was visibly nonplussed at Nash's point, and showed just how nonplussed he was by holding his arms out as wide as they would go and putting his head down on the conference table. A living minus sign. Raising himself up and wiping some (but not all) of the newly-added sugar from his undersized suit, Mike Brown addressed his critic defensively.

"Steve. Let me ask you a question."

"Steve. Did you take geometry in primary school?"

Steve saw where this was going and tried to pre-empt Brown's ridiculously on-the-nose gambit of literalness. "Yes, of course, Coach. I even took geometry at Santa Cla-"

But Steve's effort was in vain, and Mike Brown began to assert his husky presence. "Good for you. So you know what a triangle is, then, right?" Brown relished his borrowed role as a superficial Socratic questioner much as he also relished one of the remaining donut holes with delicious jam. 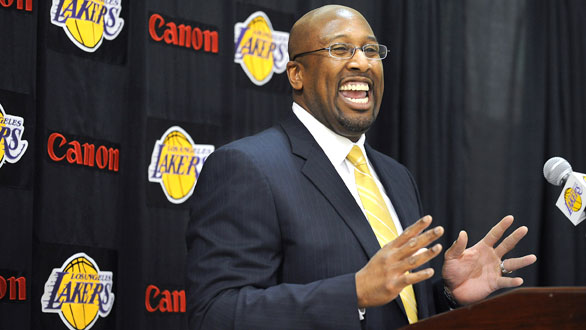 "A circle doesn't have sides, Steve. That's right. Now if you think I stole this offense from the Triangle, feel free to think that, Steve. But just remember that the sides make that impossible."

"I think we've discussed the origin of this offense enough. I think we all understand each other. Now, let me ask you something. Steve."

Steve Nash visibly gave up at this point and just prepared to answer his coach's question. "Yeah, Coach?"

"Can you make these curvy passes you see on this diagram?" Mike Brown noted a semicircular arc on the diagram from point to corner that would take a slightly wider path than the three-point line.

Had Brown taken geometry class in primary school himself? Steve wondered now. "Physically speaking, I can't... I suppose I could use the physics of the situation to-"

"Suppose is all we need. I'm not an offensive coach, Steve. It's your job to figure it out. Any real questions, without asking how I thought of this offense?"

"Yes, actually. The Tria- I mean the Circle Offense seems like it favors a team without a dominant ball-handler. How can we maximize my skillset in such an offense?"

"Great question, Steve. Alright, so you see all these options for the Tria- er... Circle Offense on the slides I prepared?"

"Well, look a little bit closer. Notice all the dribbling options. Notice all the pick and rolls that develop organically. Notice all the spacing that a good shooter brings to the offense. There are plenty of ways for you to contribute, and, I suspect, some default plays like the pick and roll that you'll excel in and eventually select by season's end. You can start to favor and improvise on the sets and options to suit your skillset. I'll leave this part up to you. You're the offensive coach on the floor, not me." Nash found this concession amusing after the five-hour presentation, but held his tongue.

"Okay, coach. So.. are there any resources I can use to improve my understanding of the Circle Offense?"

"No. Because it is completely original and nothing out there properly conveys the developments of the Circle Offense. Heh heh heh. You'll be starting from scratch," Mike Brown said, and it was unclear why he was chuckling.

Now, gazing away from one another, Steve Nash and Mike Brown looked at different horizons in far distant corners of the conference rooms, their horizons (one suspects) being utterly mutually exclusive but their goals being identical. Steve Nash fidgeted with some advanced kinematic diagrams featuring esoteric aerodynamic calculations. Mike Brown rejellied the mass of remaining donut holes, the jam making the donuts cohere into a sphere. Dire Straits' "Brothers in Arms" sounded from someone's cell phone occluded from view. There's so many different worlds... so many different suns... And we have just one world... But we live in different ones... And then the room filled with silence as no one offered to claim the cell phone ringing.

Kobe shook his head a few more times in the silence of the conference room. Andrew Bynum, shaking his head at a normal speed, shook his head hundreds of times in the same thirty-minute window. "I guess I make five," Brown said as he finished eating his delicious sphere. "Five different countries, five different skillsets. Let's make it work." Everyone gave a little audible start: No one had said a word individually but the room collectively had audibly opined the one word, "Yes." Now the Lakers filed out at different times. Debussy's Clair de Lune played from Mike Brown's cell phone as he turned to wipe off all the powdered sugar on his face and hands, a reserve of sugar so replete that to the remaining Lakers it resembled a fountain rising from Brown's back-turned head.

A week later, at Steve Nash's home, Steve received a 500-page tome written by Mike Brown. Nash knew that Brown had written the massive book describing all the options of the Circle Offense because his name was on the front. It was evidently an unpublished second edition, Nash supposed, because long sections had been crossed out and long anecdotes about Brown's experience at Kansas State had been replaced with accounts of Brown's Cavs assistant and former coach Hank Egan. Accounts featuring Brown as an assistant to Phil Jackson with Pippen and Jordan were replaced with witty anecdotes featuring Brown's former head coach, Gregg Popovich and the Twin Towers. Moral lessons straight out of the 1960s were replaced with modern lessons.

The section about plagiarism had been excised entirely, with calligraphic precision.