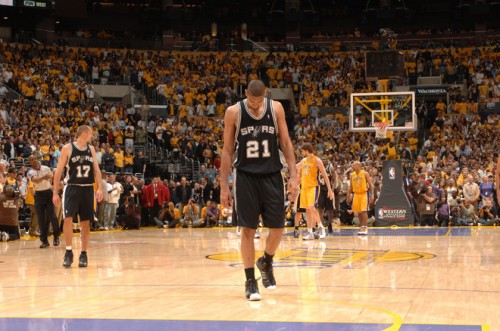 Depression is, at its core, a selfish disease. I once heard someone describe his depression as walking into a McDonalds and immediately being paralyzed with the fear that everyone in there was judging him. It obviously wasn't true -- after all, nobody was looking at him, and everyone was wrapped in their own little world. It's honestly a pretty narcissistic thing to assume that everyone in a room is waiting on your every move to judge you. But despite that, to the mind of many people who suffer from depression, the faintest sideways glance, the most imperceptible frown, the offhanded sigh -- all of them are magnified to impossible levels. Their existence all seem to inexplicably signify the weight of the sins and guilt a depressed man carries on a day to day basis. It isn't logical. It doesn't make sense. And people who are depressed realize that, dwell on it, and feel worse about it all. Because self-obsession is actively harmful when you legitimately hate yourself. But alas. Still happens.

Another thing most are familiar with is the "I can't get out of bed" type of depression. Those days when the weight of the world and living with the mistakes you've made -- many or few as those may be -- is too much and you simply cannot bring yourself out of bed without some sort of substance, or incentive, or -- for some people -- simply convincing yourself that if you stay in bed you're a terrible, horrible person. Thus perpetuating the cycle. It's always a cycle, really -- you try to do something, do it wrong, mentally eviscerate yourself for it, feel bad for doing that, etc, etc. You try to stop feeling sorry for yourself and end up playing a mental cat and mouse game, pretending you're Kevin Garnett and screaming at yourself like you're a misbehaving stanchion. Stop doing that. Be happy. Stop it. Why do you do this. Great questions, even without proper punctuation. But the answer always seems elusive.

I have lived the majority of my life with severe depression.

I try not to talk about it too much. In fact, I probably will refrain from linking this blog to any of my friends in real life for a few weeks while Alex and I pour on more player capsules and stories and games and other distracting things. This is my first particularly public mention of my depression on the internet. It is also my last. Because I'm only really writing about this in the context of basketball, because I feel like writing it down and I've long since realized that in this stupid lockout, there's really not a damn thing a fan can do besides write stuff down. We have no power. And we shouldn't really have any power, but that's not really in the scope of this piece.

Back in late 2009, I took a bad dive headfirst from "got the sads" depression into serious "you need help right now" depression. For a several month period of my life, basketball wasn't just a hobby to me. It was essentially my daily drug. Every day, I'd sit down after I'd done all the homework I could stand to get done and watch whatever NBA games were on. Grainy streams, all, but everything I could find. The Spurs and the Cavs -- my two favorite teams -- were doing well. LeBron was working miracles every night, and while I dislike him now, I will never forget just how happy his good games made me. For that dark, dark period of my life, where I felt alone and hated myself and couldn't bring myself to get over a sad breakup and the death of my very close grandmother. Basketball was the thing that got me up every day. "Hey, Aaron. Wake up. Yeah, you have a lot of bullshit to do today, but after you get off work you're going to watch a shitload of basketball and forget about every other thing in your life."

Got me out of bed, regularly. Got me on my feet again. Got me to where I forgot about the things that triggered my descent and eventually got OK. I didn't get well, I got OK. And getting OK is a momentous achievement to someone who was (and still is, to some extent) in a place as low-down as I was. And having finished college and moved on to a job I love, I am alright now. Sort of. I still have my bad days. Sometimes my very bad days. Days when my antidepressant isn't strong enough, where my girlfriend and I have a minor tiff that manages to set me off in the worst way, where I get stressed out about something and need to latch onto something to calm down. And those are the days that the NBA's sheer existence actually helps me out. Keeps me from going to bad places. Keeps me chugging along on my overachieving, gray hair-inducing, self-loathing life.

In the end, this blog exists in its own little corner of the internet, a project for me and Alex to work on our writing and hopefully entertain the few who happen across our work. I don't expect nor particularly desire your pity for being a poor man who has a dumb, annoying disease. I don't really know what I want. From you? Nothing, really. From the league? I just want basketball. When I watch the NBA, I know none of the players are judging me while I ceaselessly analyze their games. I know that the storylines, the narratives, the rivalries don't matter. I know that in the broader sense I'm wasting a whole hell of a lot of my life immersing myself in something trivial, something that simply doesn't matter. But I don't care. I love this sport. There's a dumb ad campaign from the early 2000s where teenagers cited what their anti-drug was. Mine is the NBA. Because for a few hours a night, when the league is on, I get to watch a game and feel normal. I don't focus on myself at all. I don't think about what the people around me are saying, or thinking, or analyzing about me -- I'm watching a silly game played by athletically gifted people and it's well within my rights to act silly. I may cerebrally know that few people judge me on a regular basis every day, but when I'm watching basketball, I'm too engrossed in the action to really tell.

So, I'm scared about basketball being gone. I'm scared about my favorite players, people who I hold in admittedly far too much respect -- Tim Duncan, Manu Ginobili, Steve Nash, Anderson Varejao, et cetera -- I'm irrationally scared about never seeing them play my favorite game again, or having a bad day when I realize that there's not going to be basketball for quite some time. My opinion on this matter sincerely DOESN'T matter. I say this knowing that full-heartedly. This is a labor issue, and the owners have lowballed the players to the point that the players are fully entitled and (quite frankly) probably SHOULD reject their offer. It's insulting. It's disgusting. It was made in bad faith and the owners are well aware of it. But I really, really want a deal. I want it so that I can selfishly reimmerse myself in basketball -- I don't even care if my teams are good. Because I love the league. I have a favorite player on every team, and there are hundreds of guys I want to see succeed in this league, and in this sport. It helps keep me grounded, in a lot of ways. Therapy helps. Medication helps. But having something to immerse myself in, a hobby where I feel I have true confidence in my opinions, observations, and actions? That's just invaluable.

When LeBron said after the finals that his haters will "wake up tomorrow with the same life and problems as they did the day before" it struck extremely deep for me. Because that's what basketball is, for me. As Scott Raab turns to drugs and idolatry and too many of my other depressed friends turn to alcoholism and smoking, I use my love for -- some would say my obsession with -- the NBA to keep me from making choices I'll regret and getting attached to substances that'll get me horrifically addicted. Or any other number of sins I could jump to. It's an escape, and I admit that. But there are far worse sins than basketball. But in the end, LeBron is absolutely right. If I'm honest. When the lights go out, I do indeed have to return to my life and the same problems I had the day before.

And with the lockout looming large, that's exactly what scares me the most.