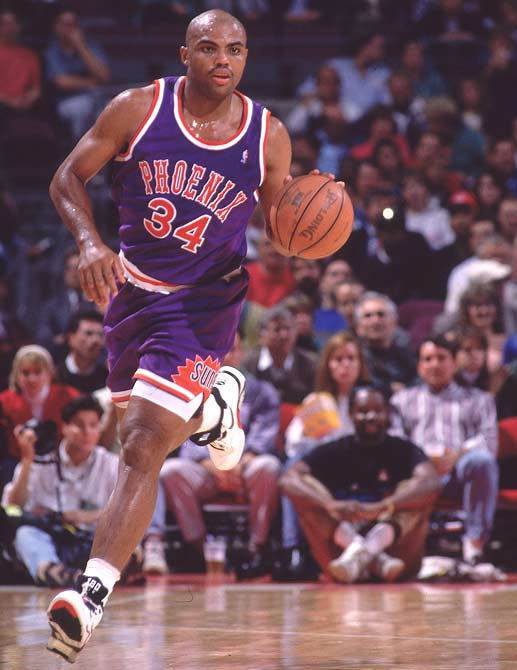 After scoring the Suns' first 12 points, he ran by
Warrior Coach Don Nelson and asked him: "You gonna double me?"

Whom the Gods wish to destroy, they first call promising.

A lot of people remember Michael Jordan dropping 63 on the Boston Celtics in 1986, setting a playoff record that stands today. There are a lot of reasons that Jordan's feat was so impressive: the '86 Celtics are a GOAT-candidate team, featuring several players in the Hall of Fame (Dennis Johnson, Larry Bird, Kevin McHale, Robert Parish, and goddamn late-period Bill Walton). Many of these HOFers were all-world defenders, too. Furthermore, the Celtics that year lost one game at home all season, including the playoffs. The other Bulls didn't have enough offense that season to prevent the Celtics from really focusing completely on Jordan. And yet Jordan almost singlehandedly took the Bulls to the throats of the great Celtics at their Boston Garden, actually sending them to double-overtime. Jordan - or God in disguise, if Bird's famous postgame comment is to be taken literally - played about as well as it's possible to play. But that may not actually be the best playoff scoring performance in the modern record. What do I mean? Check it out after the jump.

It would be unbelievably vindictive and petty - not to mention intellectually dishonest - to say that Jordan was "cheating" in his 1986 masterpiece solely because he had 10 extra minutes, considering all of this. And (if anything) context only serves to enhance the greatness of Jordan's performance. On the other hand, consider the following humorous fact, and tell me that it's not worth it to be petty and vindictive: the luckless Charles Barkley could have shattered Jordan's record in a playoff game against the offensively brilliant and defensively hapless 1994 Warriors if Barkley had had those extra 10 minutes. That's right, Charles Barkley - known today mostly for his hilarious foibles and his equally many hilarious redeeming qualities - was actually a ballplayer back in the day. It's hard to believe, but it's true: Charles Barkley actually played professional basketball for many years before becoming a television analyst. In 1993 Barkley was actually the Most Valuable Player, and he made it to the Finals with the Phoenix Suns! Imagine that! Well, you don't have to imagine. It's all true and it won't stop being true if you don't imagine it.

Barkley went 23-31 for 56 points, which possibly understates his degree of dominance. See, not only did he go 11-11 in the first quarter (3 of them were relatively uncharacteristic 3s) with 2-2 free throw shooting to give him 27 first quarter points, but he immediately followed that perfect first quarter up with 2-5 shooting with 3 (baller, but not especially difficult) offensive rebounds. That's right, he rebounded the first 3 of his 8 misses for field goals. Shooting 71% and... Let's just recap: Charles Barkley - on the first 14 possessions that ended with him taking a shot - literally converted those 14 possessions into 31 points. The next time down the court (on a fast break) Barkley got an assist for a three-point play. In real time this happened. I cannot process this information fully. Things seem further away, somehow, and nothing is real. I feel like Charles is becoming one of my old Lovecraftian horrors... oh my... the snake, I see the slithering snake approach... I see life through the eyes of a basketball. All is clear.

The organizing concept of this piece is simply turrible, Alex.

Whom the Gods wish to destroy, they first call promising.

Charles Barkley - known for his dominating career as a power forward for the Sixers, Suns, and Rockets - had a wonderful game back in 1994 that I'd like to share with you. It's kind of funny, but Charles Barkley almost challenged Michael Jordan's 63-point playoff record against the '86 Celtics. I found a Youtube video after the jump, and I hope you will enjoy as much as I have! Sorry if this piece is a bit short, but... well, it's funny: I just plumb fell asleep at the computer and in the morning my original Barkley post was gone! I can't remember what all I was talking about, but I did have some weird dreams (The Light! The Terrible Light!). Anyway, Barkley was a great player. Now, it's kind of unfair to speculate about "who could have had rings if it weren't for Jordan", largely because Jordan exercised the causal equivalent of a supernova and a black hole combined on the NBA, drawing in and destroying (or at least changing) everything in his path. But Barkley - for a solid stretch in the 90s (including this game) - had a strong argument for second-best player in the entire league. And while his MVP might not be completely justifiable, in the long run, I can definitely live with Jordan getting 5 MVPs and Barkley, Hakeem, and David Robinson each getting one.

The Warriors - coached by defensively inept Don Nelson* lost despite fantastic offensive performances from Chris Mullin, Latrell Sprewell, and Chris Webber. Webber in the biggest game of his rookie season nearly got a triple-double (16-8-13-1-3 as a power forward and as the only defender long and competent enough to have any chance of stopping Barkley). Latrell Sprewell - despite his reputation as a choker (sorry!) - showed why he was actually one of the best second/third scoring options you could have on your team for a long time. Such a sweet shot, but overshadowed by Barkley and Mullin, who "never hit the rim" (as Doug Collins put it) with his own excellent shooting performance. Great shooting all around, really, especially for such a fast-paced game. Dan Majerle had a great night for the Suns, and Kevin Johnson was making simple, effective scoring opportunities for his offense.

*Seriously, dude gave up 53 to Tim Duncan (admittedly at Duncan's statisical peak as a scorer). Uh...when their second best offensive players are Dan Majerle/Kevin Johnson or 36yo David Robinson/rook Tony Parker, you double-up and live with the results, Nellie. Jeez!

Fun game, lot of points, bad defense, Charles Barkley breaking my mind into pieces with the radiance of the sun, and a cameo by the Little General, Avery Johnson. I enjoyed the game.

Other notes:
Apparently Barkley said (seriously) he would retire - a la Jordan in 1993 - after these 1994 playoffs. In retrospect the prospect sounds a bit silly, but it probably worked as a great motivational tool. We talk about what would have happened if Jordan had stayed in the league for Hakeem's runs, but what would've happened if Barkley had taken those next six years in the booth? Earth-shattering commentary, obviously.

Yes, the title references the Biblical paraphrase/Philip K. Dick novella "[Through] A Scanner, Darkly". Yes, this is also a basketball piece about Charles Barkley. _ I'm glad you asked._