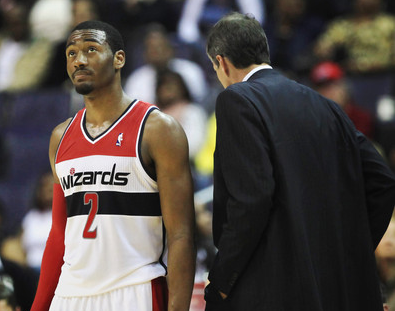 Coming off my 370-part player capsule series, I'm taking on a significantly less incredible task -- a 30-part frame examining the evolution of the individual teams in the NBA's 2013 season. Some in medias res, others as the season ends. Somewhat freeform, with a designated goal to bring you a few observations of note about the team's season, a view into the team's ups and downs, and a rough map of what to expect going forward. Today, we cover a team I recently deemed one of the league's biggest surprises, although certainly not in a good way -- we're covering the sordid, unhappy tales of the 2013 Washington Wizards.

Not exactly the most grandiose of a start I could've hoped for, but you can't win them all. Today, to start this new series outlining the stories and evolutions of each team in the NBA, I'm starting with a team most people can't bear to watch: your 2013 Washington Wizards. A bit of backstory. In the preseason, I notched the Wizards for 35 wins -- short of the playoffs, but only 5 or 6 games back. I was a bit surprised to find the Wizards I had in my head -- a scrappy (though well below average) defensive unit with a roughly average offense -- apparently didn't exist anywhere outside my head. As they stand, the Wizards are among the slowest teams in the league, and currently hold the dubious distinction of sporting the 10th worst offense in the history of the NBA. Some of that's bound to improve when John Wall comes back. How much of it? Let's find out.

TRENDSPOTTING: WASHINGTON AT A GLANCE, IN TWO WEEK INTERVALS

Despite the fact that the Wizards are the 11th best defense in the league, in not one of these stretches have the Wizards shot better than the team they're defending. Little has changed, even with Nene back -- this is a team that loses big to bad teams and has a nasty habit of losing just about every close game they could possibly lose to the good ones. Last night's brilliant performance excepted.

WASHINGTON'S BIGGEST MYSTERY: "How do you defend?"

As a team profile, I'm trying to answer most of the questions I can about the Wizards. Give some insight into what they're doing, why they're doing it, what's the point of it all, et cetera. That's the goal, anyway. But I also want to be honest about the things that mystify me. And for the Wizards, there's one thing I really can't even pretend to understand.

How in God's name do they defend so well?

Really. Despite the fact that the Wizards enter today at 5-28 on the season, they're hardly a poor defensive unit. Just the opposite -- they're on the fringes of the league's top 10, allowing just 104 points per 100 possessions. That's good for the 11th best defense in the league, and my lord, it doesn't make sense. I watched a lot of tape on the Wizards to try and figure out what exactly they do well on defense, and I've come up with a single answer. One specific thing they do well that fuels their defense and keeps them above water, defensively. That thing? They're really good at missing shots.

Let me explain. There are two or three types of missed shots in the NBA. The first are the chippies -- the ones you miss directly under the rim under little duress, that give you an excellent chance for the offensive rebound. The second are the long, semi-random chucks. Those bounce to god-knows-where, often starting a fastbreak by bouncing to the three point line into the hands of the other team's fastest player. The third are the completely hopeless missed shots, the ones that bounce behind the rim and force the other team to inbound the ball behind the baseline. The thing with the Wizards is that despite having a shot distribution that's inordinately skewed towards long two-pointers and errant threes, they're simply really good at missing shots. They're more likely to have a shot miss spectacularly (over the rim, above the backboard, bouncing off to the corner) than they are a simple long bounce that feeds a transition break. That dramatically cuts down on the number of transition opportunities the Wizards allow their opponents -- they're a top-5 team in tamping down on their foe's fastbreak points, and that certainly isn't because they're full of defensive savants.

The odd rebounds their opponents get serve two purposes. First, it cuts down on fast breaks. Second, it slows the game down and forces their opponent into their halfcourt sets. That's essential for the Wizards. Without Wall (and sustaining the sort of insane injury maladies they've suffered this season), the Wizards can reasonably claim to be the least talented team in the NBA -- when you're worse than the opponent, mucking the game up and forcing a slow, high-effort contest is just about the only way to grind out a win. With the exception of their road win over the New Orleans Hornets (where they won 77-70 in a game where both teams got an above average number of possessions, somehow), each win the Wizards have put up this year have involved holding the opposing team below their ideal pace. By pushing teams out of their comfort zone, the Wizards can throw up a few threes and get lucky. When they can't do that, they get stomped. Simple as that.

(Also, it helps that Chris Singleton is getting minutes. He's a good defender.)

At writing, the Wizards are shooting an effective field goal percentage of 44% on the season. That's phenomenally bad. It's the 20th worst mark of the shot clock era, in fact. Some excruciating stuff. The problem I have with projecting anything dramatically better to close the season is that I'm simply not sure where the improvement is supposed to come from. John Wall is a solid player, but unless he comes back from injury exactly as good as he was before, with absolutely no warm-up period? I don't see him changing the equation in a whole-scale way. He'll add a better passing wrinkle, and he's fast enough that his speed disorients the defense into giving up a slightly more open shot. But it's not like the Wizards shoot that much better on open shots -- Wall's shooters can't shoot. This team may be built around his talents, but it's hard for any one man's talents to make up for a parade of errant shooting talents and an offense that simply can't move correctly. Especially when Wall is a poor shooter himself!

Still, you have to think the Wizards are going to stumble into a better offense eventually. Maybe. Just look at last year, when the Wizards ended the year on a solid 6-game win streak after an absolutely abhorrent season, with Jordan Crawford, Kevin Seraphin, and Nene leading them to semi-respectability. Crawford actually started the 2013 season out well -- his shot selection has been poor, as is his wont, but he's made a few more threes than usual and shown a particular proficiency for the pure above-the-break dead center three point shot. With Wall back healthy to end the season, I doubt they sniff 25 wins or end the season on the same sort of a 6-game winning streak, but I could see them putting up a decent fight for 15-20 victories if they experience a marginal offensive improvement and continue their mystifyingly solid defense. Their overall outlook is grim, but as long as they continue to put in effort on the defensive end and keep missing shots with the sort of sickening aplomb that fuels their defense, they'll never quite reach the levels reached by historically awful pushovers -- you know, like the 2012 Bobcats, the 2011 Cavaliers, or the 2010 Nets. A fringe top-10 defense is more than any of those teams ever had going for them, that's for sure.

As for next year? We clearly shouldn't have been entertaining the notion of a playoff team this year, and next year seems like a comparable stretch. As good as Nene may be, one good piece doesn't make a team a playoff squad. And the offensive problems run deep. Nobody on this team can shoot, nobody can consistently draw free throws, and Randy Wittman may be the least qualified offensive coach in the NBA. Really! He's the Jay Triano of offense. In Wittman's entire coaching history, his best offensive team was 23rd in the league, and it was Andre Miller's accomplishment to get them that far. His sets aren't creative. We can pooh-pooh the Wizards players all we want -- at the end of the day, when a team spends a coach's entire tenure looking like an uninspired offensive mess with no system or strategy of movement, it's hard to really blame the players. The Wizards have an irritating tendency to take their foot off the gas and play tight every time they shoot out to even an inconsequential lead, and Wittman has an irritating tendency to either not notice or not care. They don't play to win, they play to avoid the loss -- when your team is as offensively dismal as this group, reducing your offense to 10 second no-movement half-court sets is almost like guaranteeing the other team a gift-wrapped stop. If Wittman can dramatically improve his ability to coach offense and the Wizards don't blow another draft pick, they could be decent. If Wittman can't? He should be fired, no matter how little the franchise cares about winning. Do no harm, as they say.

Hope everyone enjoyed the reprieve from my 15,000 words a week. Let's hope this series can go half as well as the last. Current rough schedule is one team a week until the all-star break, when I kick this into a higher gear and go to 3 or 4 to have scouting and stories for each team by the playoffs. I'll be writing a column about an undisclosed subject in an undisclosed location with an undisclosed family on Thursday. Look out for that. Also, I told you I'd try to come up with a riddle. But since I'm dealing with teams, now, riddles come cheap -- I'll be using a trio of random statistics or facts from a random subset of the next team's last season. If you can intuit what the next team is from these numbers, you're a scientist of the utmost brilliance. Today's facts about our next team are: