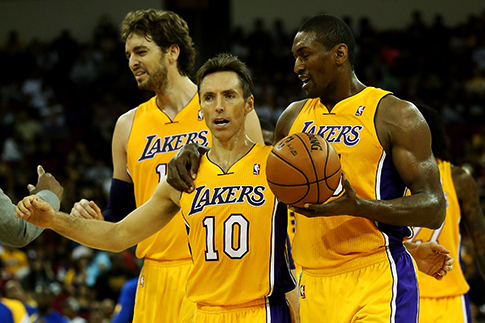 One pet peeve I have when discussing basketball is when people don't treat the game like the game that it is. I don't mean people that take it too seriously. I mean people that completely ignore the role of competition and the act of competing in a game of opposing players and teams with both fitting and clashing intentions. After all, it's this continuous collection of games-within-the-game that compels nearly every rational decision made in the games. The fact that basketball is a highly symmetric game with two teams, a finite amount of time, and definite outcomes (win or loss) seems to me about the first or second fact implicit in any discussion. All too often, we lose that thread in the hodgepodge of personalities, mental feats, and the impressive physical execution. It's a game, though! You have to play the game to win the game. And that game isn't "Can I get my buckets?" or "Can I fit the template of your designated Right Way, focusing on grit and hustle?" It's a game, and the game is basketball.

Enter Kobe. Segue, Denver. That intro comes about because of this strange Laker season in which everyone has mentally diagnosed an unsolvable problem with the Lakers, solved another one, and caused several new problems with short-sighted solutions. The "hypotheticals" game-within-the-game is a whole lot of fun, but as designated practitioner of the Right Way, it's probably time for all the fun to end. No more narratives for me, folks. Simple living, easy thoughts. Kobe has such a unique footprint on any game he's a part of, one that has grown ever more stark and dichotomous through all the recent roster turnover (forced and unforced). And yet, we get bogged down in all the ephemera to try to figure out what the heck that footprint actually is, because Kobe has set us up to think in terms of "Are you, or are you not, a winner?" And there are so many questions, in this world of winners.

All of these are interesting questions, to a point. But I've reached it. Me, I simply can't find them interesting anymore.

The better team simply tend to be on the lucky side of the coin, and teams that are comfortable being good have the most tricks available to keep themselves on that side of the ledger. It's not a categorical game. There's chance, and variables you can't know in advance. With the Lakers, all we have are their footprints on the games. Instead of looking at the shapes and figuring out what weight that contender has, what transcendence that offense is capable of, what depths that transition defense can sink to? We focus on Dwight's mentality and Kobe's chemistry. Nash's "age" and Pau's softness. Because we have an idea of what a contender looks like, we fall on well-trodden arithmetic and see if that arithmetic fits our archetype for a contender. "Is their Pythagorean age too old?" ... "Does a championship team have a player like Jodie Meeks or Jordan Hill at 6th on the depth chart?" ... "How will the Lakers shore up their bench?"

If we want to find answers to the Lakers' curious plight, we need to treat the game like the game it is. Not a scoring parlor (for the offensively-fixated) or a morality exhibition (for the defense-and-grit monger) -- it's a game! Basketball, like all games with an undetermined ending, is all about the process of determination. The process by which a team separates itself from its opponent over 48 minutes, and whether that separation was to the end of a victory or a defeat. From a gamer's standpoint, what does Kobe do when he scores, precisely? He shifts the odds. Kobe plays the game, and the net result of his scoring is that he creates some separation between his favored team and his opponent's, or he gives his team new life against a favored foe. What happens when his opponent scores because of his mistake? Just the opposite, obviously. The odds drift away from his team. Every miss, turnover, and assist changes the odds just a little bit in one direction or the other, depending on the game time and the strengths of the respective teams and players. Odds upon odds, adrift -- that's all that results from the individual actions. Tides shift, chances wane.

The game the Lakers need to play over the next two years to win might be one that we've never seen before. One with crushingly brilliant offense and comically poor defense. Maybe that's the strategy that maximizes the Lakers' odds. Maybe they end up playing 4 on 5 with Dwight stuck at the opposing foul line trying to stop transitions. Maybe Ron Artest plays center. Maybe Kobe plays point guard with Nash off the ball. I don't know! I'm throwing this stuff out facetiously, but not totally satirically. Bill Russell did it for stretches in Finals games if he thought his team needed it. We talked a good game about the Positional Revolution with the Heat, after all. Maybe it's time to rethink the way these guys are supposed to play instead of whinging about the myriad ways a team with no reasonable historical comparison differs from a traditional team. 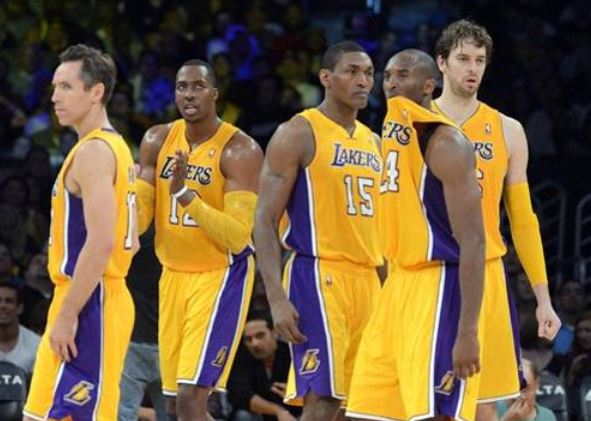 My point in saying this is that we're in the midst of injury, yes, but we're also in the midst of a somewhat stifling convention. The Lakers are hurting right now, and there's no tangible lesson to be gleaned from these injuries. At least in consideration of what the Lakers could have done differently. They made some mistakes with minutes, yes, but not that many. Maybe we're witnessing the death in infancy of a legendary dynasty-that-wasn't. Or maybe we're witnessing the calibration from a team that could win 60 games in a conventional way in its sleep to a team with a harder edge -- a team always at 75% health but never lacking in fire. Or maybe we're witnessing the latest form of your mother's same-old sandbagging Lakers, continuing onwards indefinitely as an amorphous blob of a team that can never define itself except in their desire to win each game.

... Or maybe Jim Buss will just blow it all up. That too is an option.

Whatever the case, this roster (especially with the injuries that, combined with rest, just confuse the picture even further) is utterly new territory for everyone from Bill Russell to Hubie Brown to the 14-year-old Kobe fan who's seen 20 games and remembers 3. This team is new business, and they were before Dwight stepped in, before Mike Brown stepped out, and so on. This team has not exploded from conflict; it's imploded from medical reality, if anything. And we ought not to judge the identity of the implosion for awhile. Let's stop talking about what the Lakers are supposed to be. Let's take a step back and take them as they are. We've done enough judging, enough figuring.

Now that all our delusions are right cleared up about instant dynasties and obvious busts (even for skeptical observers, this is a worst case beyond all worst cases), we ought to watch and see where the ride takes us. There are sights to see aplenty, sights that stand with pride and never as spectacle. Come, watch the invulnerable Nash on his last legs. Watch Dwight Howard as an Icarus with wings mid-melt. Watch a Black Swan in Gasol as rare as revolution. And, of course? Watch Kobe. We call him Black Mamba, but in the wake of the implosion it's time to see if he can be a chameleon. Slither more fully into the versatility he has shown this season. And Kobe must be the center of this story, as he always has been. For all one may dismiss the mysticism that surrounds his impact on the game, there's something so unpredictable and fascinating about the way he shifts the odds pathologically towards his own victory and yet never quite enough to shift those odds in a way that leaves you satisfied.