Remember how we had that one series, a long time ago, where we'd entreat our writers to scribe short vignettes on the previous night's games? We've consistently discovered there's no way for us to do that every night, but with the capsules done and Aaron back in the saddle as a more active managing editor, we're hoping that we can bring the feature back as a weekly Wednesday post. As always, the vignettes may not always be tactful, tacit, or terse -- they'll always be under a thousand words, though, and generally attempt to work through a question, an observation, or a feeling. What more could we provide? Today's three short pieces are as follows. 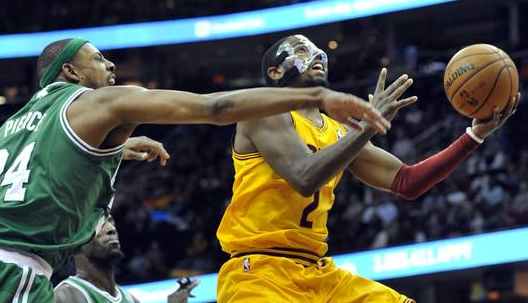 "Easy shaving for a penny / As good as you will find any."

There's something breathtaking about the pint-size dominance of a player like Kyrie Irving. No, I'm not being racist against Australians, thank you very much. (Leigh Ellis, you're the bomb.) I just mean to highlight "small" players -- not Boykins small, mind you, but any player who could be described as relativistically small. Tiny in compare. Of course Irving isn't small relative to the world at large -- the one time I met him I was barely taller than he was, and most people I know think I'm oddly tall. But on the silver screen, surrounded by seven foot trees and rippling athletic freaks of nature like Westbrook and Wall? There's a certain smallness of form, and it lends to an allure. That whole sense of rooting for the little guy, both figuratively and literally. It doesn't always make sense that a player that size is obliterating all that stands in his path. But it's almost always fun to watch.

Part of Sweeney Todd's allure as a cultural emblem lies in the very same oddity. It's fun watching small basketball players knife into the lane and make mincemeat of a team's defensive scheme. Conversely, it's fun watching a downtrodden man exact his revenge from a fundamentally ignored profession. It's unexpected, odd, unsettling. Nobody goes to the barber and suspects them to harbor murderous tendencies. Before you see Sweeney Todd, you never think to yourself... "oh, wow, I'm baring my neck to a man with a large razor and giving him full sight of my jugular veins." Nobody thinks that! In a person's pre-"Sweeney Todd" youth, barbers are simply ignored figures who perform a service and that's that.

In reality, there's nothing particularly off-kilter about the mere idea of a demon barber. After all, blade-wielding or not, they're human beings just like the rest of us. There's nothing especially disturbing about a murderer just because their profession gives them a bit more access to the human neck. There's nothing especially interesting about a forty point scoring night just because the bedazzling guard is a bit on the short side. Neither are especially exemplary by themselves. But it's the expectation that counts. We live with the unstated truth that we're constantly trusting our barbers with our lives. Sweeney Todd challenges that. So too do we live with the unstated truth that a shorter player is "worse" than a larger player, less fitting, more foreign. Untrue, of course, but it's a matter of expectations. We can't account for what we don't expect. So we watch Sweeney Todd, we read of his exploits. We consider all the times a barber was a flick away from ending our lives. And what happens? Our skin crawls. Discomfort, shivers, and horror abounds.

And then, as with last night, we glance upon a demon barber of a different sort. We watch Kyrie Irving scrub his hands and dive into the teeth of a wheezing, storied defense. We watch a helpless Celtics squad triple team the diminutive Irving to no avail. He drew his straight razor and sliced the lane in twain, putting the game away and making a title-aspirant defense look like a set of deck chairs. And it really isn't all that unexpected at this point. Kyrie Irving is as bloodthirsty a competitor as any Sweeney Todd look-alike -- the Cavaliers aren't a good team, and the Celtics aren't anywhere near what they once were. But they've got a future. And they've a dazzling waterbug guard who, at his best, plays in such a way that you simply can't look away. 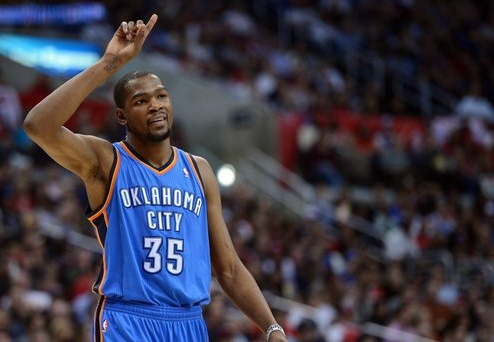 Kevin Durant was the future last night. I don't know where basketball will be in 40 years, but one of my pet ideas is that we'll make the court about 45 feet shorter. That is to say, the court would be about half as long. You could get the entire field of play in a single camera shot, more or less. I'm guessing the court also gets a few feet wider on each side to make Thibodeau-style defense more difficult and corner threes a mite less efficient. Why do I like this idea?

You're always defending your basket and, at the same time, near a quick score at your opponent's basket at any given time, potentially only a short outlet pass away. Those of you familiar with tennis? Well, there would be a game-within-the-game similar to tennis' shot construction, where balancing offensive and defensive commitments of players becomes a defining strategic consideration. Keep a point guard at the top of the key to run the offense? Okay, but if they lose the ball on a pass they're going to have trouble covering a rangy defender! Dominant rim-protector? Sure, but the closer you bring him to your own rim, the further away he is from scoring.

The reduced size of the court almost eliminates defenses getting set habitually except out of timeouts, inbounds plays, and special defensive strategies. Would smart teams like the current Spurs benefit from a faster-paced assault? Sure. Would it help transition speed-demons like the Thunder and Heat? Sure. Would it help the talented Lakers? Trick question. Nothing can help the Lakers. But yeah, probably. Who knows? I think it's worth finding out. Kevin Durant and LeBron James would be the ideal players for this model. They're always in transition defensively and always ready and able to chase down players that get ahead of the break. This version of basketball would actualize the two of them in both the individual and team senses, even moreso than the game does now.

That's the key reason it's a pet idea of mine. Basketball as it is seems more primed to actualize players like Tim Duncan, Derrick Rose, or Chris Paul -- players that don't want to run back between every play or be a constant two-way threat. Players that want to switch their attention every play. Granted, Duncan would pull off some amazing outlet passes. Derrick Rose would force the "defensive" team to sacrifice transition-time resources just to stuff him at the rim. Chris Paul is an all-time great in terms of his intelligence and feel for the game. Physically, though, they'd suddenly be at a serious disadvantage to the relentless athleticism of LeBron or Durant.

Kevin Durant gets buckets at an amazing rate and has improved in all facets of the game. I wouldn't be surprised if the main limiting factor to his and LeBron's improvement is to be found in the nature of the game rather than in the nature of their transcendent talent. That's what Kevin Durant showed me last night. Not just that he can get buckets at a legendary clip (although, still, just look at this dunk again). He showed me that through athleticism and talent forces us to reconsider the entire nature of the game. 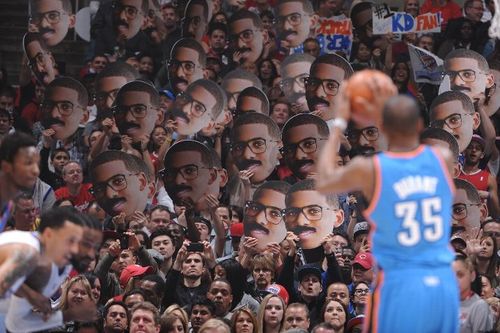 If you have some pieces, you're almost there, and if you're almost there, you go for it — even if the chances of toppling a superpower are slim. "If you've got even a 5 percent chance to win the title — and that group includes a very small number of teams every year — you've gotta be focused all on winning the title," says Rockets GM Daryl Morey. Mark Cuban, the Mavs' owner, agrees: "One sprained toe or two, and the competitive landscape changes," he says. "You don't want to miss that opportunity. You should always put the best team you can on the floor within the parameters you have set for yourself."

I think the NBA should switch to a 16-team seeded bracket for the playoffs. My reason for this is simple. It's mathematics, even. Using the above 5% number as a baseline, let's assess some hypothetical probabilities. Let's say that the team with the highest likelihood to come out of the East is, say, Miami. The Heatles sport a tidy 64% chance in this set of hypotheticals, with the Pacers, Knicks, and Bulls each featuring 10% chances. The other 6% goes to the field. Let's say the West is more like... Thunder at 34%, Spurs at 17%, Clippers at 17%, Grizz at 10%, Warriors at 8%, Nuggets at 6%, rest of the field at 8%. In a position of uncertainty (uncertainty including everything from injury, unforeseen breakout players, and sheer random chance) I think those are fair as a starting point. I might actually have these team lower and the Nets, Celts, and Hawks a little higher myself, but I'm illustrating something.

Now, a forward perspective -- let's just say that the Finals is a 50-50 flip, each time. No matter how good a team's chances are coming in, after the crucible of three rounds they've made a statement that they belong. That means we can get the odds of a title by dividing each team's conference-winning chances by 2. In that case, Miami's the only >5% contender in the East, and the West features the Thunder, Spurs, Clippers.

It's not likely, don't get me wrong. But remember that the uncertainty that we're basing our model on includes not only Draymond Green breaking out to shut down LeBron or KD, but also the probability of a serious injury or string of injuries to the contenders. If Marc Gasol goes down, the Warriors still have to go through the remains of that decent Memphis team, and then two of the Thunder/Clippers/Spurs, likely with both at full strength. The point here isn't to make some deep statement about the contenders as they are, the point is that -- with a reasonable model of probability -- we can say that the East-West bracket combined with West-dominated depth of the league ends up crowding out plenty of Western teams from realistic contention, putting teams that could theoretically compete with the best in the league into rebuilding mode.

On the other hand, eastern pseudo-contenders without a realistic shot can point to "that ECF appearance two years ago" or "that 36-46 playoff season where we took them to 6" as an example of how close they are with the right pieces. (Hello, Philadelphia!) Eastern teams and players can accumulate fans and acclaim just for being in the right conference! Meanwhile, solid Western teams can lose them for the same reason. Them's the breaks, and I'm sure I'll live with the consolation prize of great basketball every night in the West and not having to pay attention to the Pistons except that one guy (you know who), even if it hurts the Spurs chances a few percent.

But I also think it's self-perpetuating, in the sense that an Eastern team doesn't have to field quite as good a team to be mediocre, playoff-bound, or in contention. Ergo? It doesn't. This is a collective problem, and collective problems in the specific cooperative/competitive sense are hard to solve without action by the ruling body. And along those lines? Perhaps it's time to solve it.