Remember how we had that one series, a long time ago, where we'd entreat our writers to scribe short vignettes on the previous night's games? We've consistently discovered there's no way for us to do that every night, but with the capsules done and Aaron back in the saddle as a more active managing editor, we're hoping that we can bring the feature back as a weekly Wednesday post. As always, the vignettes may not always be tactful, tacit, or terse -- they'll always be under a thousand words, though, and generally attempt to work through a question, an observation, or a feeling. What more could we provide? Today's short pieces are as follows. 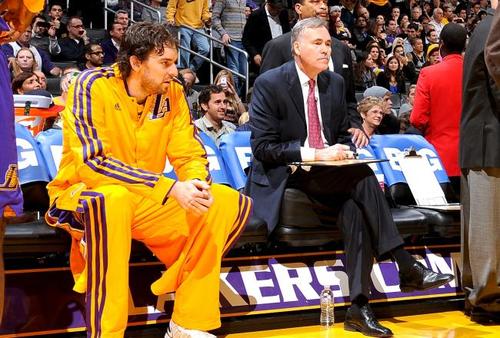 __LAL vs NOH: A Battle of Bad Decisions
___Aaron McGuire_

We like to talk about the games-within-the-games -- the rebounding battle, the free throw battle, the turnover battle. So on and so forth. You know the type. A score of minor games within the broader game of basketball that compose the game's competitive fabric. Among the meta-games, there's one that gets understandably scant press. Not very fun to watch, nor is it something the individual agents like to highlight, even if they win it! It's often the elephant in the room, or something that gets analyzed in a vacuum by individual team blogs or analysts as an isolated incident or a silly individual problem rather than two agents locked in a cold war as they trudge forward into mutual destruction. I refer to the most curious of games-within-the-game, this time discussing the coaches at hand: the battle of bad decisions.

"Not every coach makes bad decisions," some would say. And I'd disagree. All coaches make a few clunkers every time and again, especially on bleak nights at the halfway mark of a slog of a season. Even the best coaches in the world aren't exempt from head scratching moves at inconvenient times. Take last night’s fourth quarter. As strange as the New Orleans closing salvo was to watch in real time, it was stranger still when the run dried up with about 2:00 left in the game and Monty Williams chose to ride Robin Lopez over bringing in Anthony Davis. It would be one thing if Davis had played poorly, but he'd played excellent basketball all night long. A dominant run by Davis in the third was one of the only reasons the Hornets weren't looking at a 20-30 point deficit, and he’d kept the paint on lock when he was in the game. For Williams to stick with Lopez -- playing well, but not overwhelmingly so -- over Davis was a bit of a curious ploy, and one that bit back in the final few plays when he gave up a Steve Nash layup with 4:20 to go. Impossible to tell in-the-moment, but it turned into the beginning of the end -- the layup (combined with Clark’s a few minutes later) caused the Hornets to adjust their defense to stick closer to the rim, which in turn caused Nash's defender to float a few feet off him in what would become the game-deciding dagger with 1:21 to go. It was a curious choice, especially given how well Davis had played the Los Angeles offense in the third quarter that got the Hornets back in it.

Funny enough, though, this was arguably not the worst coaching decision made last night. That one probably belongs to Mike D'Antoni's completely indefensible riding of Antawn Jamison throughout the final quarter. At least Robin Lopez was having a decent night on both ends -- Jamison shot 1-5 from three point range and made 5-9 of his twos, with a few lucky rolls to pad the numbers. The real problem was the defensive end, where Jamison served as little more than a lazy Susan in the lane, dishing up prime opportunities for the Hornets to stick him on a screen and rotate easily to the rack. It was fine at the start of the fourth quarter, when the Hornets were playing a lineup featuring Lance Thomas, Brian Roberts, and Jason Smith. His defense doesn’t hurt as much when the other team doesn’t have players who can make plays. But when Monty put in Gordon and Vasquez, and their offense started running actual plays? The layup line was a buffet of baskets. Seven baskets in the paint in the fourth quarter for the upstart Hornets, and virtually all of them came at Jamison's expense. It was a phenomenally stupid move, and when the Hornets started playing off LA's reactive paint-covering doubles to drain some open threes, D'Antoni probably should've realized it was essential that he get Jamison out of there. He didn't, but his bad decision ended up being irrelevant. It's a battle, you see, and a battle the Lakers won.

That's the thing, though -- it's a battle precisely because bad decisions always happen. They're a part of the game, and they aren't avoidable whatsoever. The key is getting a coach who makes poor decisions a bit less often than the other guy. Although D'Antoni hasn't been a success in Los Angeles yet, I think he stands a good shot at putting things together and – as they say – making fewer mistakes than the other guy, someday. Monty Williams? The young man's a coaching dynamo, but nights like last night underline the general point. You can be a phenomenal coach, but you're never perfect -- not Popovich, not Jackson, not Sloan. No matter how good you are, you'll make a few decisions on gut instinct and guile that simply don't pan out. Breaks of the game. Last night, Monty's favoring Robin Lopez ended up biting back a bit. D'Antoni's favoring of Jamison almost let another win slip away. But the Lakers gutted it out and got the victory.

Sometimes basketball's complexity gets the better of us, as one finds oneself trapped under the weight of expectation and analytical rigor. But sometimes it isn't really all that complicated. Two middling teams meet, and on a muggy Los Angeles night, the team that made the fewest egregious errors won. It wasn't pretty, it wasn't fun, and it epitomized the lazy mistake-ridden center of late January basketball. I even got into the bad-decision mix, realizing quickly I'd made an immensely poor choice to staying up late while sick only to watch a crummy basketball game and write an uninspired short the next day. But you know what? A win's a win, and a piece is a piece.

"I am become Lakers, consumer of pageviews."