Remember how we had that one series, a long time ago, where we'd entreat our writers to scribe short vignettes on the previous night's games? We've consistently discovered there's no way for us to do that every night, but with the capsules done and Aaron back in the saddle as a more active managing editor, we're hoping that we can bring the feature back as a weekly Wednesday post. As always, the vignettes may not always be tactful, tacit, or terse -- they'll always be under a thousand words, though, and generally attempt to work through a question, an observation, or a feeling. What more could we provide? Today's short pieces are as follows.

Read on after the jump. 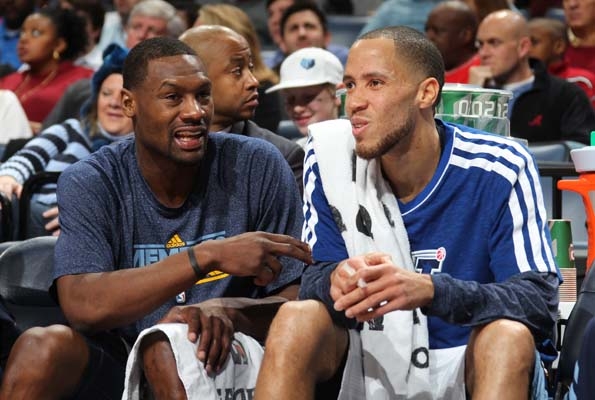 __PHX vs MEM: The Dirge of Inspector Gadget_
Aaron McGuire_

In the wake of Rudy Gay's departure from the Memphis Grizzlies, there's been a lot of talk about addition by subtraction. The idea that the team is going to get better -- perhaps a lot better -- from the formerly inefficient Rudy Gay's departure alone. Call it semantics if you'd like, but I'm not sure that's quite right. Addition by subtraction is reserved for situations where a player vanishes into the ether entirely -- whether through injury, a salary dump, or a suspension. When a player is replaced by a different agent with an entirely different skillset (as the Grizzlies did by picking up Tayshaun Prince to fill-in for Rudy's production), the trade becomes more a case of addition by tinker. Or more accurately, change by tinker, as it doesn't need to be prescriptively bad or good. It's a team taking a stab at absorbing a new set of skills brought to the table -- quite a different matter than addition by subtraction alone. Properly assessing the moving parts of a complex trade is surprisingly difficult.

Last night provided a good teaching example, when Grizzlies fans and NBA scribes got to watch a tantalizing glimpse of Prince's potential to help this Memphis team. Make no mistake -- Prince was active, impactful, and one of the scant few reasons the Grizzlies were in last night's game at all. His go-go-gadget arms were disrupting passing lanes all night long, and his fit into the offensive flow was surprisingly smooth. While he missed a few at-rim chippies he'd usually hit that made his overall game seem a bit inefficient, he took open shots and forced the Suns to run around like madmen to keep him from popping open for more. He served as the primary ballhandler for a few stretches of the game to a lot of success, something Rudy Gay was never great shakes at, and his command of the boards and passing lanes gave Memphis a lot more than they'd perhaps have the right to expect. Was it the same as Gay's contributions? Certainly not -- it was entirely and completely different. But it was useful, and it gave them a wrinkle they never quite had before.

Of course, despite that, the Grizzlies still lost. And that's where the minutiae and the complexity starts to rear its head. Prince showed versatility and comfort beyond all reasonable expectations, and Zach Randolph showed excellent form in a 21-13 return to his uncontested first-option status. Even Jerryd Bayless had a good game, combining everything he's given Memphis this year with a necessary infusion of three point shooting. (He was lit up on defense, but he was scoring so well it didn't completely matter.) Everyone else, though? A horror story. Marc Gasol's passing was slow and poorly timed, and his offense was completely off (partially because of a few horrible calls that sapped his aggression). Mike Conley has always played better with Gay on the court than with Gay off, and last night continued the trend -- his shots were hasty and poorly considered while his passing was weak and predictable. Darrell Arthur played like a nervous man worried for his minutes, Ed Davis was a complete nonfactor, and Tony Allen's defense was surprisingly tame. It was a lame and lethargic night for the Grizzlies as a whole, in spite of the unexpectedly exceptional performance from Randolph and Prince.

So, what was the end result? Prince played well, Randolph adapted, and everyone else appeared to fold. For one example of a night, the trade was completely inscrutable – it was essentially impossible for a layman to tell if the game was one the Grizzlies would win with Gay in their corner. Conversely, it’s difficult to state for certain that the game was one the Grizzlies would lose – without Prince’s contributions there’s no way to mentally assess how Gay would’ve filled in Tayshaun’s role. It’s hard to figure if Rudy Gay would’ve made the team more or less engaged. There’s no certainty when you assess a trade in-the-moment. A come-to-Jesus moment of realization, a understanding of exactly how good or bad the trade ended up being for your team? That’s rare. Elusive. A questing beast for a new age.

Basketball is a binary sport. You win, you lose -- the game ends, and you move on. The trades and sub-games of basketball are distinctly different. They aren't binary at all -- you don't simply win a trade or lose a trade. You make the trade, then you batten down the hatches and wait through the ebb and flow of the trade’s impact. All the while you watch the signals and the numbers, sift through statistics and figures, and furrow your brow in an effort to find a stark understanding that never comes. There are indications, sure. They’re just buried in mountains of noise, what-if’s, and conditionals. That's a large part of what makes trades so fun, for fans and analysts -- they're a lingering wisp of unparalleled nuance in a sport of stark truths and analysis. 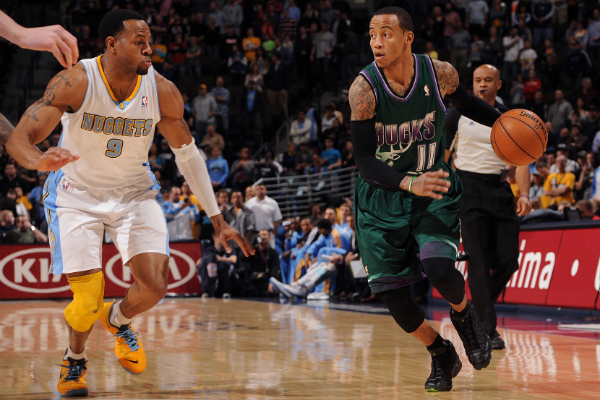 Certain performers, composers, and listeners bring something to the table when they perform, compose, and listen to music. That something is called musicality. Musicality connotes acuity for melody, harmony, rhythm... but in its broadest sense, musicality really just means the ability to locate and produce sound in time and space. As a musically-oriented person I can hardly listen to music without much musicality. This isn't elitist; some people can latch on to great lyrics or the generally-well-conveyed emotion of a song much more easily than I can. And it's to their credit. But for me? Musicality is the First Law of my personal musical programming.

To that end, I've been thinking about what makes a basketball game "good." Considering a few games burned to my memory:

The Bobcats-Heat game was quite sloppy at times. It's unfair to paint it as "the Bobcats brought toughness and the Heat brought talent" because that's the obvious narrative when MKG is out and the Heat-Bobcats game is close. No. The Bobcats brought consistent execution, a bunch of above-average slashing/shooting guards (Ben Gordon, Ramon Sessions, Kemba Walker) that had good feel for the game, and the Heat brought LeBron James and Chris Bosh both having exceptional nights (James shot 13-14 from the floor) along with_ nobody else_. The Heat's defense looked a bit porous and the team as a whole looked a step slow. But they were competing and finally got some separation at the end. The Bobcats were staying in the game, bringing a bunch of runs to the table, often scoring at will, kicking it out well despite questionable shooters on the perimeter, and playing good basketball. They lost, but it was respectable.

The Lakers-Nets game was horrifyingly bad in the first half and I didn't want to watch anymore. I have blocked that half out of my memory forever. Some notes from a disoriented amnesia: Reggie Evans kept checking in (okay maybe this only happened twice) and it didn't feel like he was making the Nets any worse on offense. Like, Reggie Evans looked like a relatively average offensive option. Read those sentences again. That should never happen, ever, unless Reggie Evans woke up one day replaced by Kawhi Leonard or David Lee. I mean, Reggie Evans is comically bad and it is deeply comical that someone as physically large as Evans is so offensively limited that he gets about half his contested shots blocked and the other half completely uncontested. And in this game, he looked like an average option. Maybe even above-average. After all, while he may be bad, at least he's not sitting on the perimeter expecting to make shots like Gerald Wallace, Deron Williams, and Joe Johnson. The Nets offense was awful. I love where Brook Lopez is at, and Lopez has exceptional touch and instincts with the ball that are a joy to watch, but oftentimes Brook Lopez is carrying the Nets like he's friggin' Dirk Nowitzki. And it's a dismal watch.

On the other hand? The Bucks-Nuggets game last night was excellent, one of the better games I've seen this season. Part of it was probably the wine and friends I watched it with, but the flow of the game was simply excellent. Yes, part was built on Samuel Dalembert having the game of his life with 17-21 shooting on a brilliant sequence of open looks, offensive rebounds, and just plain "it's my night" kind of shots. But, you know... the Bucks lost. Simple Milwaukee answer: Monta Ellis and Brandon Jennings (combined 11-36, 24 points, 16 assists, 9 turnovers) were impossibly poor, except for a short stretch when Milwaukee was rolling. Also, so many of Milwaukee's deadly turnovers happened right when they were up 7 in the 4th with a chance to end the game. Simple Denver answer: No one on the Nuggets looked exceptional, but all of them weathered the Bucks' early dominance. They made a 19-4 run to end the game built on characteristic Nuggets' steal-to-fast-break machine.

We can explain the game that way, in terms of "what happened, why, when". But I think the real thing that made the game good was just the "basketbality" of the game and constituent players. Analogous to musicality, basketbality (a clumsy term waiting for replacement) is the situational awareness and ability to respond that made the Heat-Bobcats and Bucks-Nuggets so excellent and the Lakers-Nets so poor last night. That is to say, the Bucks and Nuggets were able to locate and produce the right plays in time and space, and the Nuggets just did it a bit more often.

Pressed for time, you'd be much better off listing the players that didn't have great basketbality: Brandon Jennings looked great for a brief stretch filled with dribble-drives, but it was mercurial greatness and Jennings strayed from good plays for bad shots far too often. JaVale McGee had his... own particular feel for the game. And that's about it. Most of the players on both teams were pretty aware, engaged, and active. Larry Sanders was blocking left and right and getting dunks on the other end. The Bucks weren't overfeeding Samuel Dalembert; that was the most impressive part. He started 16-18 and the Bucks weren't going to kill the golden goose by feeding Dalembert for a bunch of inefficient isos. Milwaukee coach Jim Boylan actually had him sit when he had 7-7 or 8-8 in the first half, because it was Sanders' time to return and that was the gameplan.

I think basketbality -- so far as it's defined -- is one of the key things I enjoy about basketball. A combination of kinesthetic intelligence, situational awareness, vision, and feel. Feel for the game, for time and space, and for what just one can contribute with one's resources. Also, all the dunks and blocks at the rim were pretty cool. Kenneth Faried, folks. Larry Sanders. JaVale McGee. They can jump out of the building and still have enough kinetic energy in them to power an arena's backup generator. That was neat too, fancy or not.