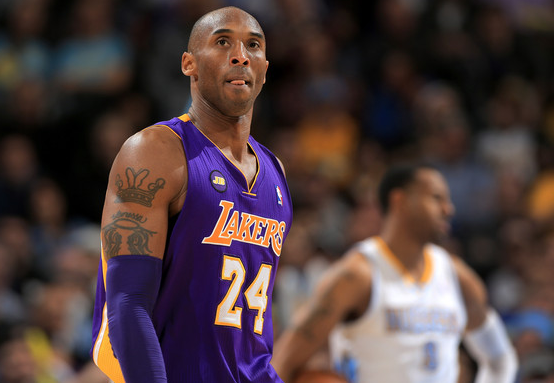 This week, we're trying a new column proposal from Adam Koscielak, our Poland correspondent. The gist? Adam is an angry contrarian man who hates everything and everyone. Virtually everything in the known universe annoys him. Given this, every week, Adam has dozens and dozens of weekly grievances and complaints. Even about things like the NBA, which he actually enjoys! In this new feature, Adam shares with the world his top three NBA-centric complaints of the past week, as well as a single positive statement in a hopeless effort to retain what little humanity he has left. Enjoy.

I really dislike Kobe Bryant. I don't enjoy watching his game, despite the skill involved. See, even when he passes, I don't really feel any sort of team spirit within him. That team spirit drives my love towards basketball -- why do you think I like Steve Nash so much? And while I'll readily admit that I hate players like Kobe PARTLY because I'm never going to be a player capable of being like Kobe, I'll also note how even in a great game, Kobe Bryant still manages to get away with the deadliest basketball sin of them all: the turnover. Or, in the case of Bryant's Friday game against the Toronto Raptors, a whole nine of them.

As with every game, I ended this one on Twitter, discussing the results. Many swooned over Bryant's incredible 41 point 12 assist performance, but I did not -- I sat back and kept staring at his nine turnovers. Usually, the main reason a critic would harp on Bryant is his tendency to shoot too much and too inefficiently. This time? The turnovers just bugged me. I got into a few heated discussions about this, with others telling me I should just let go and enjoy his wonderful performance. That, though, would mean I don't want perfection in basketball! And that would mean I'm not myself. So, I decided to look at it from a less Twitter-centric point of view. I decided to look at what exactly a turnover does to the score. And you know what? Not enough people realize this: Basketball is about points. Not about clutch, not about dunks, not about flash -- it's about points. Doesn't matter when you score them so long as you outscore the other team.

The Lakers succeeded in doing this, led by Kobe, in an epic 15 point comeback. But what people don't realize is that if Kobe didn't turn the ball this often, odds are the Lakers wouldn't have needed that comeback to tie the game. Want proof? Let's use some stats. Now look, I'm no statistician, and Aaron will probably kill me for all the simplifications that will come with these calculations (Ed. Note: Aaron is seen looming in the background, casually whistling as he sharpens a blade), but I want to show a basic logic I use in harping on turnovers, rather than the specific math behind it. Even if I wanted to, it'd probably be impossible, seeing as I barely passed math in high school. (Ed. Note: What.) With that said, let's get to it.

First, I will be only counting the 8 turnovers Kobe made in regulation, since the theory here is that had Kobe not turned the ball over this much, the Lakers would've had an easy win. Since I do believe that it's understandable to have 3 turnovers per game when you're handling the ball as much as Kobe, I will count this out only for 5 turnovers. So, I used nbawowy.com to see how Kobe and the Lakers faired against the Raptors generally that night. It's a bit of a flawed approach, given how the turnovers themselves affect the stats, but since the game had 88 possessions with Kobe on, I will let it slide. I could always use general Lakers data for this, because of larger sample sizes. But I wanted to see precisely this game.

Now, I'd just like to ask fans and media alike to remember that NBA basketball is played for 48 minutes, not just for the last five. This is why the refs did not screw you by taking away two points in the last minute of that game a few weeks ago, and this is why a magical half-court shot isn't what won the game. The team won the game, by scoring more points.

Basketball is about points. Really. You can look it up.

Remember the night Manny Pacquiao got knocked out? I do. It was fun. Very fun. But then came along a group of people who hate fun, and decided to call everyone that laughed at poor Pacquaio out as heartless, callous people. Which is fine, until you realize that it wasn't the pain Pacquiao was in people were laughing at, but the total and utterly shocking defeat he'd just suffered at the hands of Juan Manuel Marquez. It could be funny. Entering that ring, Pacquiao decided to accept his fate in the ring, and decided that as long as it was game-legal, he'd take a beating from Marquez with the assumption he could dole it back.

Sunday night, Brandon Knight was given the basketball counterpart of a knockout. He was posterized by DeAndre Jordan, after which he dropped on the floor like a sack of potatoes. He was fine, nothing happened, so people laughed. And then came the fun-haters, who pointed out it's a jerk thing to be laughing at poor Brandon. After all, he was just trying to prevent an easy bucket, he was just trying to help his team. We get that, but we'll still laugh. You know why? Because we like laughing. Are we not allowed to laugh at something that looks funny without having to hear about the consequences of such laughter, especially when no one was hurt? Hell, even if he WAS hurt -- the person that was hurt accepted the possibility of that happening! Pacquiao knew he could be knocked out, he's been knocked out, and he knocked out people before. Brandon Knight knew he could get dunked on, he's been dunked on and he dunked on people before. Let's just have fun with that without having to think whether he was making the right play, ok?

Oh, and as a postscript... if we're going to criticize people for laughing at that, we might want to send apologies to Frederick Weiss. He made exactly the right play in the Olympics, but still ended up going through what must've been the most awkward moment of his life courtesy of Vince Carter. Karma's a jerk.

Look, Dwight Howard isn't a horrible person. He's just an annoying person with a terrible PR team. He's a manchild with no self-awareness whatsoever. I'd tell you more, but I don't want to swear, so let me just say this to players who may end up in similar situations later on:

The Non-Grievance of The Week

I've already told you about how much I'd liked the DeAndre Jordan dunk on Brandon Knight, right?