This part of the NBA season sucks.

No, really. It's awful. For the fans, players, media... everyone. Beat up and burnt out NBA teams with little left to play for don't make good television. They don't make compelling analysis, either -- at this point, most teams have cast their gaze to the barren playoffs, lying in wait as the games that REALLY matter beckon them forward. Players rest, teams tank, and the NBA product becomes trite and uninteresting.

Of course, this isn't news. People have known about the NBA's general March miasma for a while. Here at Gothic Ginobili, we've been lagging a bit. Partly due to our writers being astonishingly busy, partly due to the general lag in the NBA lately. I've always been a strong advocate of the idea that you should fix a period of lagging content and lacking inspiration by going completely off the wall and trying the weirdest idea that comes into your head. After all, I hired Dewey. So I took a few ideas into the back shed and came up with what I believe to be one of the alternatingly worst/best ideas I've ever scribed. Please join me in extending a warm welcome to GG's newest feature -- Fallout: Phil Vegas.

Let's start with the basics. In its simplest form, Fallout: Phil Vegas is going to involve a playthrough of Fallout: New Vegas. For those of you who aren't familiar with the game, here's your summary. The game centers around a post-apocalyptic world where the world's been utterly ravaged by nuclear war and taken over by several disparate ruling factions. You play the role of the Courier, tasked with delivering an unreasonably important item to an unreasonably important faction leader. Throughout the game you fight various radiation-mutated beasts in the Mojave Wasteland, gaining levels and experience as you find progressively more ridiculous weapons and armor. You eventually have to choose which faction to align with out of four entirely different choices. Fun times. This won't be any old vanilla playthrough of the game, though, and it won't be formatted in the same trite "let's play!" format that's common among video game playthroughs. That's too simple for me. The main conceit behind this particular playthrough of the game is three-fold.

First, the Courier -- the game's main character -- is familiar to our readers. It's Phil Jackson. This is what he looks like: 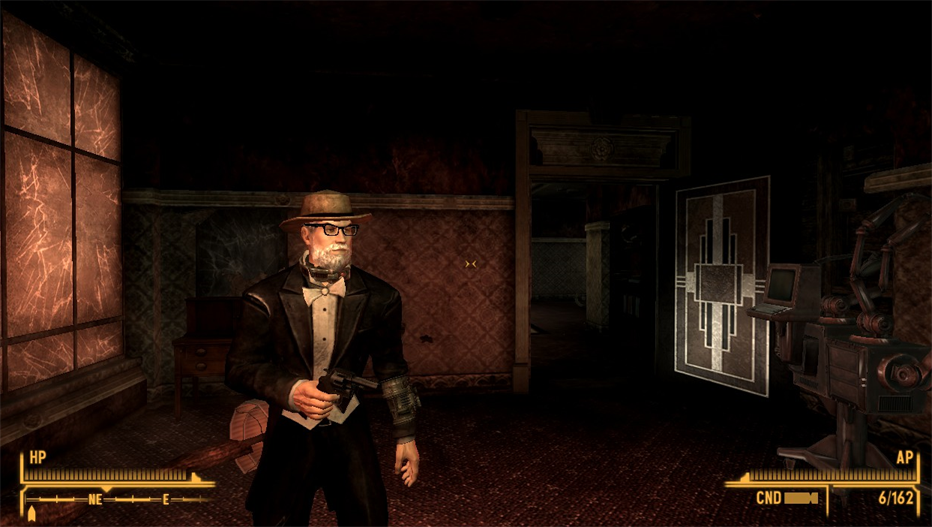 Second, I won't be taping the run and putting it on YouTube. I'll be playing the game, taking screenshots, and writing a story using the screenshots and the in-game dialogue as one side of a two-sided conversation. The second side -- Phil Jackson's thoughts, hopes, and dreams -- will be handled through text. Ever hear the old thought experiment about how Twilight was only produced so that someday Kanye West would someday be hired to play the role of one of the vampires without ever being given the script or the slightest idea what was going on? That's the goal here, with good ol' Phil. While the events of the game take root, Jackson serves as the completely confused (and fittingly bemused) straight man. "What am I doing here? What's going on? WHY ARE THESE GECKOS SO HUGE?!?"

The third side, as you may have surmised, is that there will be a certain amount of reader interaction. We'll be using a newly established @gothicginobili twitter account, the comment sections, and email. At the end of each post we'll have a set of reader-choice "next moves" for our bespectacled protagonist, and as I play through the game, I'll post the occasional question to Twitter asking readers to pick between several possible decision points. I'm not entirely sure how much reader interaction we'll be modeling into the playthrough -- I may realize early on that it's better to keep things surprising and axe the "reader choice" part of the deal. But I'd like to try it out, if nothing else; I'm not an experienced gamer whatsoever, and I'm positive we have readers with awesome ideas that could burnish this segment greatly.

Regardless. This whole idea could crash and burn on arrival. I realize that. It still seems really silly to me, but in a good way -- it's like a fun little throwback to the #RedDocRedemption saga where I played through Red Dead Redemption and vocalized my non-gamer confusion at everything that ever happened. That said, it's a strange series. It's weird, it's stupid, and although I'm trying to simplify it as much as possible, I can already tell it's going to be a bit complicated. I've started working on a rough order-of-operations for the game and some of the big "decision points" I can float out to you readers. I'm going to try to post one Fallout: Phil Vegas post every Tuesday and Thursday from now until the game ends or the overall segment becomes loathed by our readers. I see you, folks.

Until then, check back at Gothic Ginobili every Tuesday and Thursday to gradually answer the question that everyone's always wondered.

If Phil Jackson was tasked with saving the world in a post-apocalyptic Nevada... what would he do?

EPISODE #1: "A Run of Bad Luck" -- Phil Jackson wakes up in the Mojave Wasteland, shot in the head and confused about everything. Phil picks his stats, learns to shoot, and gets his bearings.