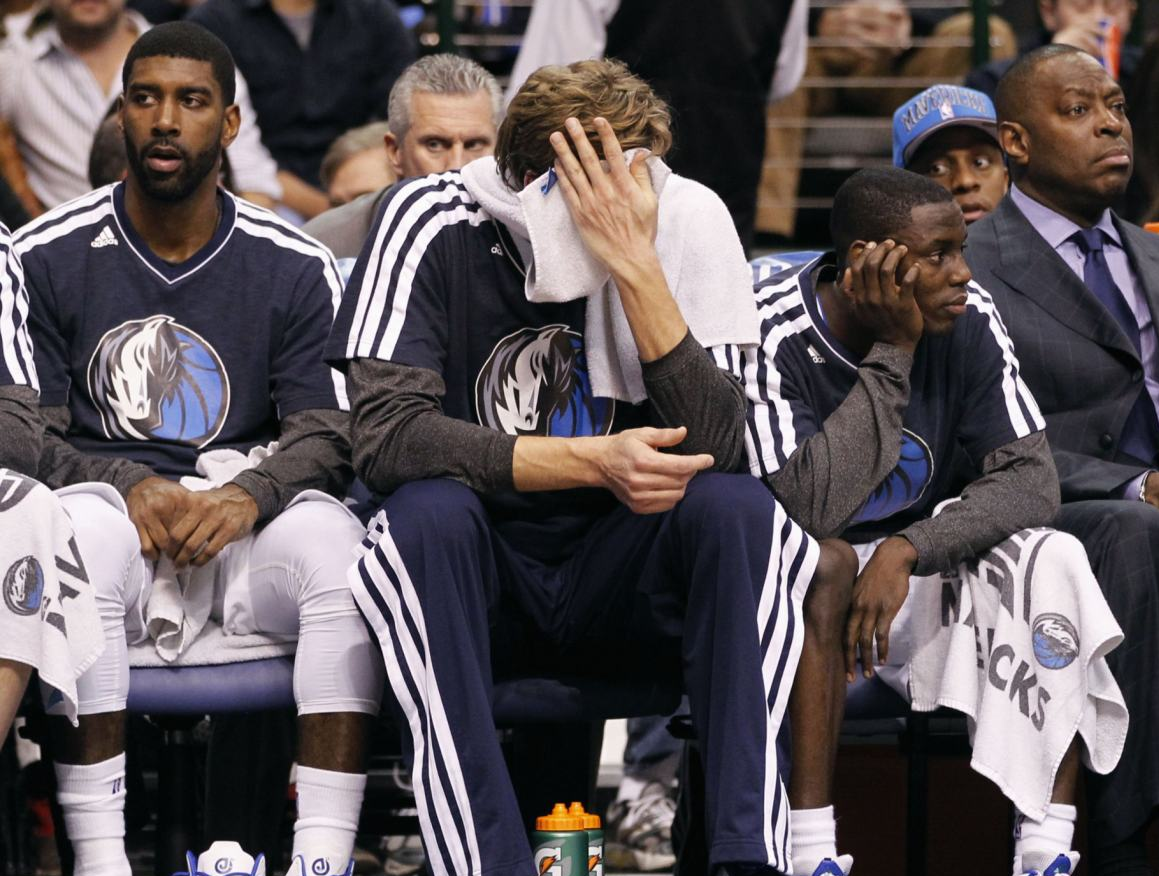 Last night's contest between the Dallas Mavericks and the Los Angeles Lakers pitted against one another two disappointing teams fighting for their rapidly fading dreams. On one side, you had L.A.'s wayward title aspirants -- once ballyhooed as the greatest collection of talent since the 1996 Chicago Bulls, the end result seems to have erred on the side of the 2011 Boston Red Sox. Lots of glitter, lack of grit. Lots of glamor, lack of glory. Et cetera, et cetera. The Lakers entered the season with a singular dream: that of a dominant title-winning season, coupling a return to glory for Kobe and Pau with a late-career sparkle for Steve Nash and the first of many for their mercurial center.

Now, of course, they're scrambling to make the playoffs.

As for the Mavericks? Dominance was never in the cards for this Dallas team. They started the season without their centerpiece and featured a cobbled together roster of ancients and refuse, one of the greatest challenges of Carlisle's career as a coach. The goal wasn't a title, even if that would've been wonderful. The goal was to keep an even keel and show the world that the Mavericks don't back down. The goal was a playoff team. And not just that, perhaps, but a strong one that pushes a higher seed and provides the basis for Dirk's future. The tertiary lights behind a future title team. Home court? Inconceivable. But stealing home court? Perceptible, with Dirk's quintessence and possible throwback years from the likes of Carter, Brand, and Marion.

Alas, it was not to be. The Mavericks entered the year without Dirk Nowitzki, which wasn't their death knell; all things considered, their opening schedule was astonishingly easy and gave them the chance to tread water. And they did tread, standing at a respectable 7-9 at the dawn of December. Originally, we thought Dirk would be back then. A return just as the schedule started to get rough. But that didn't happen. Dirk's rehab took just a few weeks too long, and his original on-court manifestation was balky at best and depressing at worst. The Mavericks were 12-15 when Dirk returned, but Dirk wasn't quite Dirk yet -- he returned to the court in a 38-point loss to his team's bitter rivals, and the Mavericks lost 8 of the first 9 games Dirk played in. Thirteen wins to twenty three losses. Ten games under 0.500 -- it was a dismal record, one that Dirk Nowitzki had never seen before this season. The dream appeared to be dead. The playoffs were a distant, bitter memory in a season gone completely awry.

But a funny thing happened on the way to obsolescence. The Mavericks -- those downtrodden, downbeat Mavericks -- finally began to win again. It was slow at first. An overtime win against the Kings, a four game streak, a three game streak. Nothing world-breaking, nothing astonishing. In a season of 15-game win streaks and 55 win five seeds, nothing that moved the radar. But, life support or not, the dream wasn't quite dead yet. All of the sudden, after going ten games under 0.500, the Mavericks were 22-13... with four heartbreaking losses by 3 points or less in the stretch. They were virtually tied for the 9-spot. They were knocking at the door. Dirk was magnificent, although the team had no idea how to get him the ball. The defense was shaky, but Marion and Brand did just enough to pull out the wins. Players were in-and-out, but Carlisle was putting together a rotation again. The door was open, and in one fateful night, they had the opportunity to wrest it ajar and pronounce their arrival to the world.

The final margin -- that grisly 20-point margin -- looks rough. But it wasn't quite as rough as one would think. This wasn't a laugher. It goes down in the record books as a 20-point blowout, and the Mavericks season may go down in the record books as a generally awful sub-0.500 affair. But that understates the torment for the fans and the team and the general public. This uneven, unlucky season was much more painful than a garden variety blowout.

Consider the turn of events that decided the game. With 4:20 left to play, the Mavericks were within 7 points. Dirk Nowitzki had just entered the game, and Dwight Howard was headed to the line. And Dwight missed both! But Earl Clark, everyone's least likely Laker mainstay at the start of the season, corralled the offensive rebound and dished to Pau Gasol for an easy two. Suddenly, it was a ten point game. Carlisle drew up a play for a Nowitzki three. Clank. The Mavericks foul Dwight Howard, praying for the seemingly inevitable misses. He makes 1-of-2, but Dirk misses another three. Another Howard foul, which is again the right move -- probabilistically, Howard should miss 1-of-2, and it should remain a game. But he doesn't give away the points -- this time he makes them both. The Mavericks rush their next possession and end it with an awkward Vince Carter two. Clank. Another Howard foul, another 2-for-2 trip. Nowitzki gets fouled himself, but probability mocks these Mavericks -- Dirk goes 0-for-2, as Howard makes another 1-for-2 on the next possession. And then, to cap things off, Kobe Bryant drains a pretty two pointer with 1:46 left to play. The once-surmountable lead is now 19 points strong, and the game is over.

There will be no miracles. There will be no comebacks. These merry, plucky, bearded Mavericks trudge to the bench as Sacre, Dentmon, and Morrow take the court to play out the string. And as a proud Dirk Nowitzki and the remnants of one of the league's most impressive champions watch their season slip away in a single game, everyone's left wondering what might have been. Without Dirk's injury, do these Mavericks -- they of a 22-14 record with a healthy Dirk, I might remind -- challenge for the 5 seed? These Mavericks were beset by bad luck from the get-go, and over the course of the season, they've lost a startling 12 games by five points or less. For comparison, Golden State lost only 4 such games. Houston? Only 7. Sometimes, the chips don't fall. You don't hit your straight. You're one roll short.

On a warm spring night in the City of Angels, two dreams met on the field of battle. One left bolstered -- the other, defeated. The Los Angeles Lakers still have their unlikely title shot -- their flagging, fading, sputtering title shot. It's a shadow of expectations, certainly, but the expectations were too high to begin with. They've come accustomed to their new reality, and they're persevering in the face of adversity. But they're also one more thing, perhaps more important than anything else. They're lucky, once again.

The Mavericks are not. And as we bid adieu to the 2013 Dallas Mavericks, we happen upon their eulogy.

"You were alright, but you just weren't lucky."