As one of our mainstay features, Aaron is writing posts highlighting every single player in the NBA. Role players, superstars, key cogs, or players who are barely as useful as ballboys -- none are exempt from the prying eyes of our readers. Check the index for a lowdown on order, intent, and all that jazz. Today's trio includes Ronny Turiaf, Trevor Booker, and Pooh Jeter. 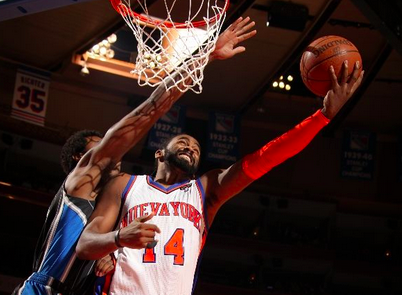 Ronny Turiaf is pretty awesome. For a shiftless, wandering hobo of a player whose career season thus far has been averaging 7 points and 4 rebounds as a nonessential bit player for the 2008 Lakers, Turiaf can say one thing. He's memorable. From his generally solid one-on-one defensive presence to the greatest reactions in all of basketball (see: examples 1, 2, 3, 4, 5, 6, 7, 8, 9, and 10), Turiaf is the kind of player everyone wants to have on their team. He's even got a really poignant story, having battled through heart problems and undergoing open heart surgery just to enter the league. Also? He's literally obsessed with anime. Which is rather rare for an NBA player, but then again, so is Turiaf. About as rare as you can get.

In terms of tangible value as a basketball player? Limited, but interesting. Turiaf's offense is extremely poor, based solely on being set up for dunks. But his defense? Fun to watch, and effective. He sets legal screens stronger than virtually anyone in the league, and has a far better sense of the floor on defense than anyone else currently on the Knicks roster. Extreme hustle guy, though he's not a lockdown rebounder (like many hustle guys). He's not a great shut-down-the-paint kind of player, but in terms of rotations he really makes the Knicks tick. When he's on the floor and healthy (admittedly an uncommon thing, with him) the Knicks are a halfway competent defensive team. Not a joke. Unfortunately for the Knicks, Turiaf gets injured a lot, and they don't really have the depth behind him to make up for it. Realistically, in whatever new CBA we get from the lockout, Turiaf is going to be a really important player for the Knicks. They need him to be healthy if they ever want the defense needed to make a serious championship run, because they're never really going to have the money to chase any other big guy that changes the scheme of their defense like Turiaf does. Perhaps they can just hire Phoenix's training staff. Then Turiaf will never, ever get injured. Anyway. Love Turiaf. Only former Laker I can say I love.

Great guy, decent player, fun to watch. What's not to like? 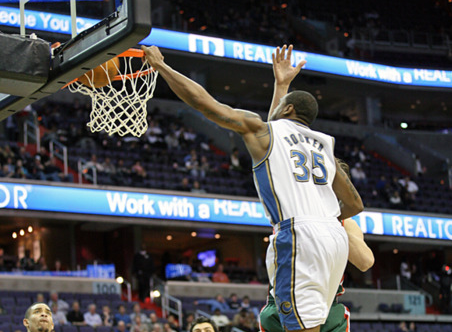 So, Trevor Booker. He was recently named one of the 25 best players ever to attend Clemson College. Which sounds good, until you realize Horace Grant, Tree Rollins, and Larry Nance are the top three. Which isn't exactly amazing company. Still, his name is one that NBA buffs would do well to remember. He's not going to be a star, but I'd say he was one of the 10 most effective rookies from the 2011 class, and he's got a fair amount of potential to be one of the elusive "glue guys" on a future champion, someday. He plays a confused position -- his size has him regrettably playing at a defensive disadvantage whenever he matches up at power forward or small forward, being too big to tamp down wings and too small to tamp down forwards. He puts in the good college try, though, and for my money was one of the hardest defenders on the Wizards last year. Not a great defender, for sure, but he played hardest on that end of anyone on the team outside of Hinrich. He was also for my money the only player on the 2011 Washington Wizards that knew how to set a proper screen. Skills!

On offense? Not a wing skillset befitting his wing size (he's 6'8" and 240 lbs), but a surprisingly effective post game. He's got a very good hook shot, and in general, he's relatively excellent at juking his man out and getting his when you feed him in the post. He shot 70% at the rim this season, and while that's partly an artifact of his low usage and his poor competition faced due to the fact that he only played 16 minutes per game (yet another casualty of Andray Blatche's game), it is reflective of the eye test -- solid post moves, and you get the sense he could be a real offensive weapon if used correctly. Overall? Probably needs to develop a jumper, but Booker is a solid rebounder for his size with a distinct talent for scoring if you dump to him down low. I don't know what his ceiling is -- an effective version of Sheldon Williams, perhaps -- but he was a relatively impressive rook given his low expectations and I'm expecting he takes a jump next season. Seems like a good guy, too. Trevor Booker's favorite Christmas gift ever? A big wheel. Who can hate someone who loves big wheels? If you remember one arbitrary fact about Trevor Booker, make it this one.

EDIT: A few additions, gleaned from a chance twitter mention from the great Adam McGinnis of Truth About It (for my money one of the best team blogs in the biz). I didn't know this , but Trevor Booker's main nickname is "Cook Book", coming from a monster game he had against the Grizzlies around midseason where he dropped a 21-12 night, prompting Cartier Martin to keep yelling at him to "marinate 'em, grill 'em, put 'em in the oven. Cook 'em Book." The nickname stuck. McGinnis himself tends to call him Booker T, which is beyond awesome, and also added that Booker's got monster bounce -- a truth I don't know how I neglected to mention, especially given the picture I chose to use for this one. Still. Along with his post moves, Booker T is definitely a player that can get up with the best of them. Which helps on entertainment value. I really hope he gets more playing time next season, Blatche isn't the future and Leonsis needs to stop thinking he ever will be. 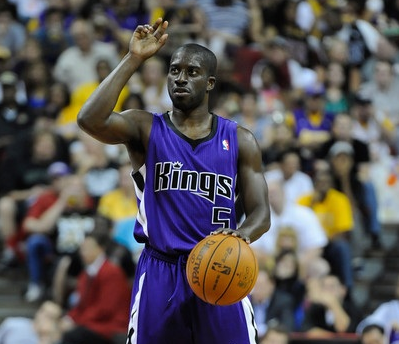 Pooh Jeter was a member of the Cavs' summer league team back in 2010, a summer where my research assistant job gave me enough time to watch most of their summer league games. I remember him being really impressive, at least against lesser competition, and I really wanted us to sign him. We didn't, which was sad, but the Kings did and he fulfilled his dream of becoming an actual honest-to-god NBA player. I saw a few of his Kings games. Really, he wasn't bad -- for a third string guard, he was very solid. Despite his diminutive size he had some limited success on defense against larger points, and his lightning speed makes him valuable solely for his change-of-pace potential. He's a baller. And while his height makes him barely an NBA player, I have no doubt whatsoever that had fate intervened to give him an extra 3-4 inches and make him actual NBA size, he'd be a lifer in the league. May still be a lifer, due to his knock-em-out work ethic and his amazing name.

Alright, that's sort of rude. I'm not implying that his name is the reason he'll stick in this league. The real reason he'll stick in the league is because he's simply a good player, an Earl Boykins type who will refuse to back down and will continue to chomp at the bit for a role in the league as long as there's one for him to take. But let's take a minute to talk about his name, which is one of my favorites. One of the best names in the league. Eugene Jeter III (THERE WERE TWO EUGENE JETERS BEFORE HIM) is already a pretty awesome name, but it's the "Pooh" that really takes it over the top. Like, really... how the hell did he get that nickname? How does a baller like him take it in stride that his nickname comes from the same person who wrote the poem I started this capsule with? And what's more, what's up with the last name? Is he Derek Jeter's long lost lovechild? DOES HE HAVE A BROTHER... named Piglet?

All these questions and more will be answered on the next episode of "a show that only exists in my mind."

I liked writing these. Always good to get a light load of players every once in a while to break up the heavies. I know I said I MIGHT get to two capsule posts today, but the Walking Dead is almost on, and I have to go watch. I'm simply addicted to disappointment. After all, how the hell else could I be keeping close tabs on the lockout? Until next time, laddies.