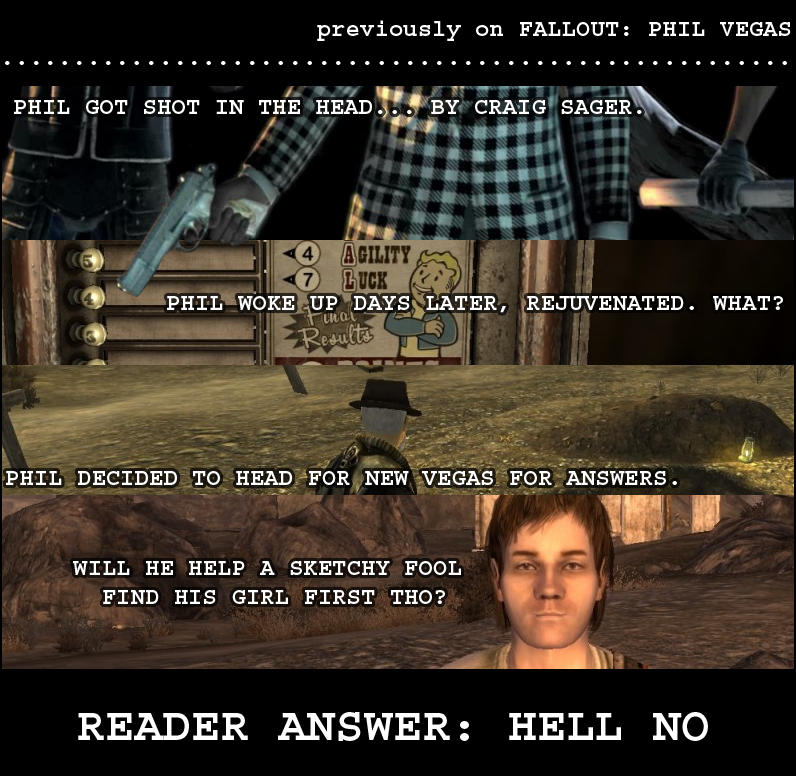 "Please, mister, you have to save her!"

"Nah, that's alright. Go rescue her yourself. Waste not, want not."

Exactly. Phil Jackson parted from Barton Thorn, leaving the young man frustrated and annoyed. Jackson walked towards the main road, but stopped at an odd sight -- here, in the middle of the desert, he saw a beat-up rusted out refrigerator with a corpse inside. He leaned down to get a closer look and started cackling. The dessicated corpse was dressed in a semi-familiar archaeologist's outfit, with the tell-tale vest and the tell-tale hat. It was -- by all appearances -- Indiana Jones. 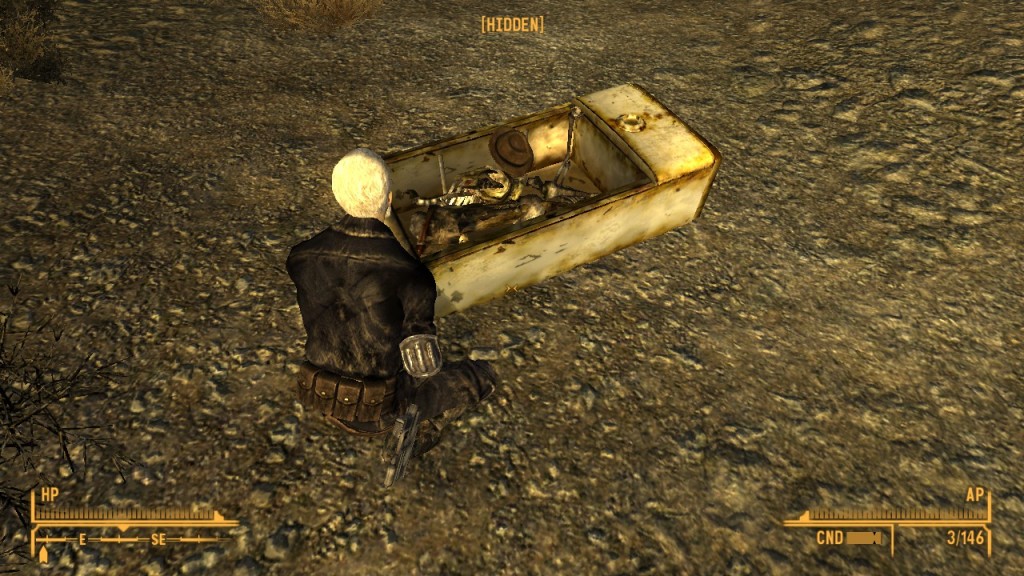 You know, when you think about it, this is exactly what would happen to anyone stupid enough to think that a lead-lined refrigerator would save them from a nuclear blast. Phil pondered. I mean, really -- the lead might protect you from a bit of the post-explosion radiation, but lead isn't some magical shield that keeps the explosion out. Why did Spielberg inspire kids to do that, anyway? Maybe this was Indiana Jones. But maybe this was some random kid pretending to be Indiana Jones, actions telegraphed by his favorite stupid movie. God. What a crock. Phil shook his head and made to leave, but he stopped for a moment. He'd always wanted to be Indiana Jones... 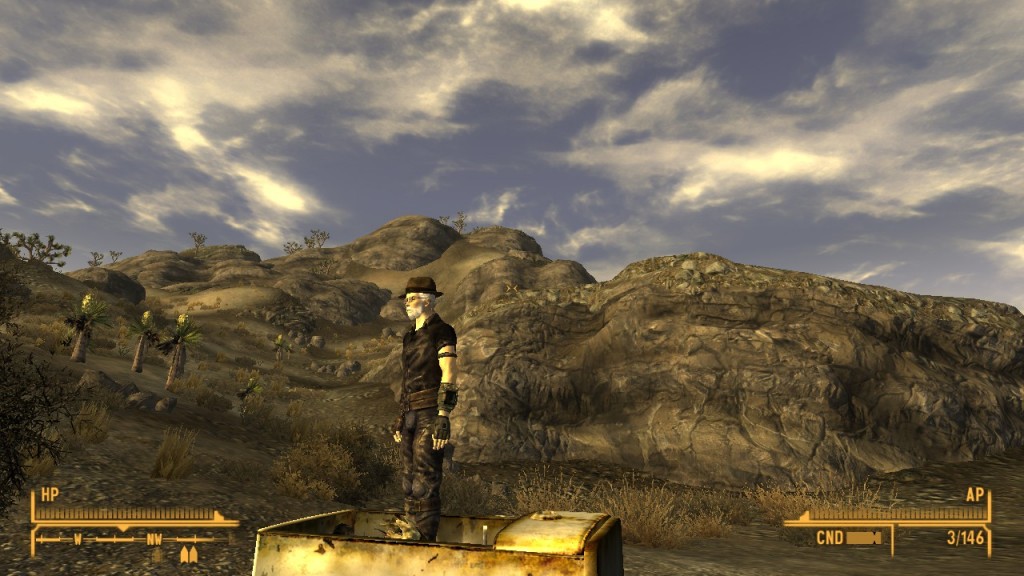 "This is the greatest moment of my life."

Walking along the road back to Goodsprings, Phil spied a small shack. Ever-curious, he ambled forwards -- it looked unlocked. Indeed, it was. But the sign on the door brought a pang of sadness as he walked through -- it said "Jean's Sky Diving." Jackson walked in, half-heartedly hoping that the interior of the shack would give him a sign. "Jeanie was here", perhaps? Or, better yet, "Jeanie Went There, You Can Go Find Her There, Just Go Get Her Phil." Alas, nothing but a locker full of rubbish, a few extra guns, and a strange blue-star bottle cap. Given the post-apocalyptic wasteland thing, Phil hadn't chanced upon some time to himself. He sat down and started considering his position. 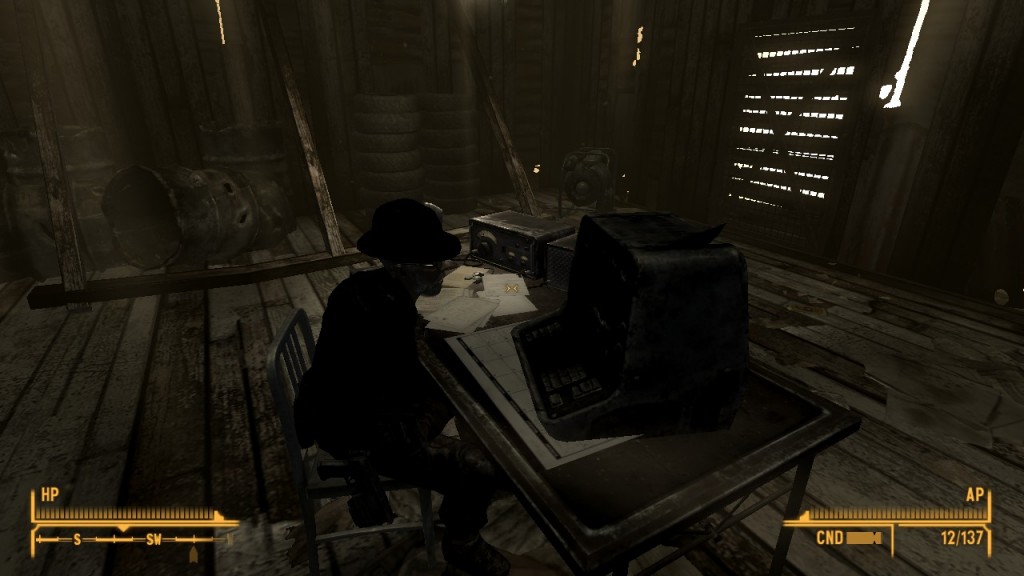 On one hand, the situation didn't seem particularly grim. Goodsprings seemed like a relatively ramshackle town, but that wasn't a huge deal -- there appeared to be at least some vestige of a functioning economy, which naturally meant that there was some place in the world that was better off than Goodsprings. He'd find it eventually, and he'd make it his own -- his body felt younger and more limber than it used to, and he still had all that classic Phil Jackson guile that inspired fear into the hearts of men. He could use a few more luxuries, but he'd find those eventually. He'd make his bread. I'm an adaptable jerk. I'll be fine.

On the other hand...

Phil Jackson was not a man used to utter and complete confusion. Even in his lowest moments of coaching in the NBA, there was always some sense of broader order in his life. He had his friends, he had his love, he had his reputation. There wasn't much else a man needed in life, although the fifty-eight championship rings surely didn't hurt. He found himself in a situation lacking every single one of those essential staples. His friends were absent, and the only person he'd even vaguely recognized in this new world was -- somewhat ironically -- the man who had inexplicably shot him. And he didn't even get THAT good of a look at him, so it was hard to tell for sure whether it was Sager or not. His love was obviously gone -- perhaps she was somewhere in California, but he had his doubts. And his reputation? NOBODY KNOWS WHAT A BASKETBALL IS. There was a certain level of discomfort and dissatisfaction with each one of these realizations.

Phil Jackson had spent a long time cultivating each and every one of those staples. They were gone. He was alone, left to rely only on his own devices. And the more he thought about it, the more he felt he needed to track down Sager. It didn't really matter if Craig was the one who brought him to the Mojave Wastelands or not -- if there was anyone in this place who had the slightest idea what Phil was doing there, it'd be the first one he met and the one who shot him in the first place. Sager's a schlub, but he's not stupid. He had to have a reason to shoot me. There has to be SOME reason. In his irritation at the loss of his well-cultivated life, he'd shifted all the blame to the closest recepticle: the clowning sideline reporter who simply must have been tangentially related to his arrival.

And so, Phil Jackson was solidified in his plan. He would find his way to Vegas. First he needed a map, but he'd find that in due time. He would head out and find Craig Sager. And he would find his answers. First, though? Time to make some money. 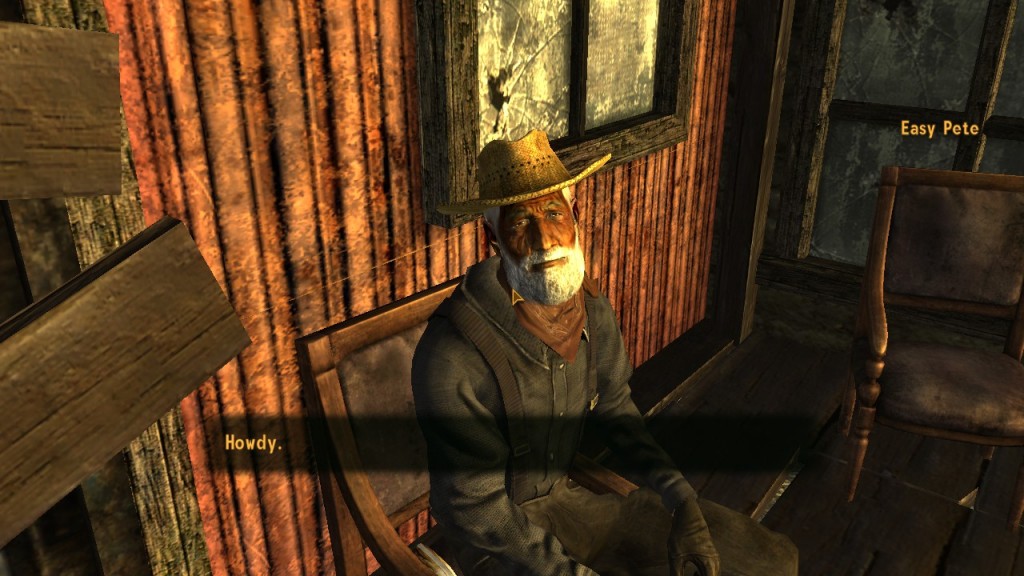 Returning to Goodsprings, Phil saw a strange looking red man in front of the saloon. He'll know how to make money. He looks legitimate. Phil waved him down, which turned out to be completely unnecessary since the man was completely immobile in his chair. "Hello, sir. I'm Phil Jackson."

"The name's Easy Pete. What can Easy Pete do for you?"

"Why do they call you Easy Pete?"

"Because the name's Easy Pete."

"I'm starting to understand how sideline reporters felt when they interviewed me."

"I was a prospector. Now I ranch Brahmin."

"You were a prospector -- like digging for gold and silver?"

"Nah, nah -- means I poked through old buildings looking for old tech and such. Some people call it salvaging, but I don't. There's good money in it."

"Interesting. Did you ever find anything good?"

"Nope. Had a good claim once but got run out by raiders -- eventually got too old to go out."

"So... you can make good money salvaging, huh?"

"Do you make any money ranching? Is it enjoyable?"

"I was a prospector. Now I ranch Brahmin."

"Howdy. The name's Easy Pete. What can Easy Pete do for you?"

Phil entered the saloon, walking in on what seemed to be a very heated argument between a man dressed up in a prison uniform and the saloon's barkeep. He stepped back and watched the fireworks, ending when the prison man spat at the barkeep and stormed out, pushing Phil over on his way out the door. Phil dusted off his shirt and looked over at the barkeep, a woman named Trudy.

"What the hell was that?"

"Haven't gotten to meet you yet. Welcome to the town. Name's Trudy."

"A punk, more like. They're a faction of ex-cons that go around the countryside throwing dynamite at people and scarin' the heck out of any old town they pass through. Broke out of the NCR prison a few lengths from here, then they stormed the prison and took it over. That's their base of operations now."

"New California Republic. You really aren't from around here, are you?"

"I'm not. Regardless, why was that one guy so annoyed?"

"Fools have been out putting pressure on Chet and myself to give them discounts and free drinks and stuff. Gotten rowdy with my patrons, gotten fresh, et cetera. They've been annoying, but it's only recently they've gotten violent and dangerous -- we've been helping a trader named Ringo hide out here, because apparently the Powder Gangers robbed and tried to kill him a while back. Ringo's good people, so we're bound to protect him, but it kinda looks like they're going to burn down the town to try and get to Ringo. Dunno if he's quite worth that, but we don't send people to slaughter, so we're in a bad position here."

"That's not good. Is that Ringo Starr from the Beatles?"

"No, it's not good at all. And I have no idea who they are. Still, if you could help Ringo escape, that'd be mighty nice of you. Or you could help us fight off the Powder Gangers. Or something. Also, can you fix my radio?"

"I have no idea what's wrong with it."

"... what does that have to do with anything? Why are you telling me this?"

"I don't understand the world. OK. Where's Ringo again? Also... do you have a map? I need to get to New Vegas."

"Gas station up the hill. And no maps here, kiddo."

Contrary to his better judgment, Phil booked it to the gas station atop the hill. He'd tried to get in earlier, but the place had been locked up tight. Ringo must have recently left. Phil walked inside to look for clues to Ringo's whereabouts, but stopped and raised his hands as soon as he walked through that door -- a man with black hair was pointing a gun at him. "OK, look. If you're with the Powder Gangers, I'm going to kill you. If not, you best state your business right quick. Or just stay silent and get the hell out of here. One or the other, I suppose. Really not in the mood for games, friend." 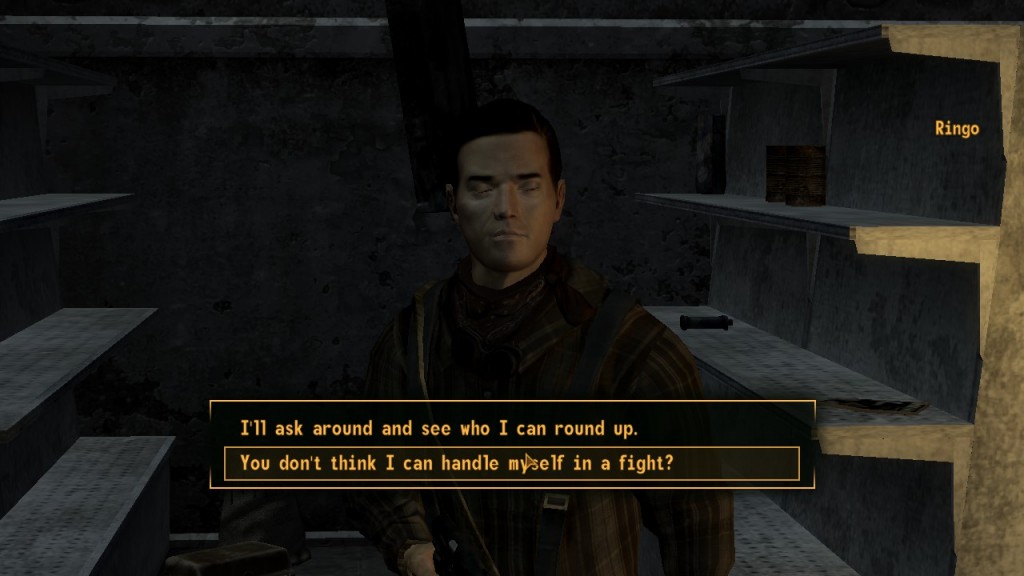 DOES PHIL JACKSON HELP RINGO AND THE TOWN OF GOODSPRINGS FEND OFF THE POWDER GANGERS?

DOES PHIL JACKSON HELP THE POWDER GANGERS KILL OFF EVERY RESIDENT OF GOODSPRINGS?

DOES PHIL JACKSON REALIZE HE'S HAD A MAP ON HIS LEFT ARM THIS ENTIRE TIME?

Decide in the comments below, or on twitter -- mention Phil Vegas to @gothicginobili or use the hashtag #PhilVegas for all responses. Leave any format-type concerns/thoughts in the comments as well. This is, as you must have noticed, decidedly a work in progress.