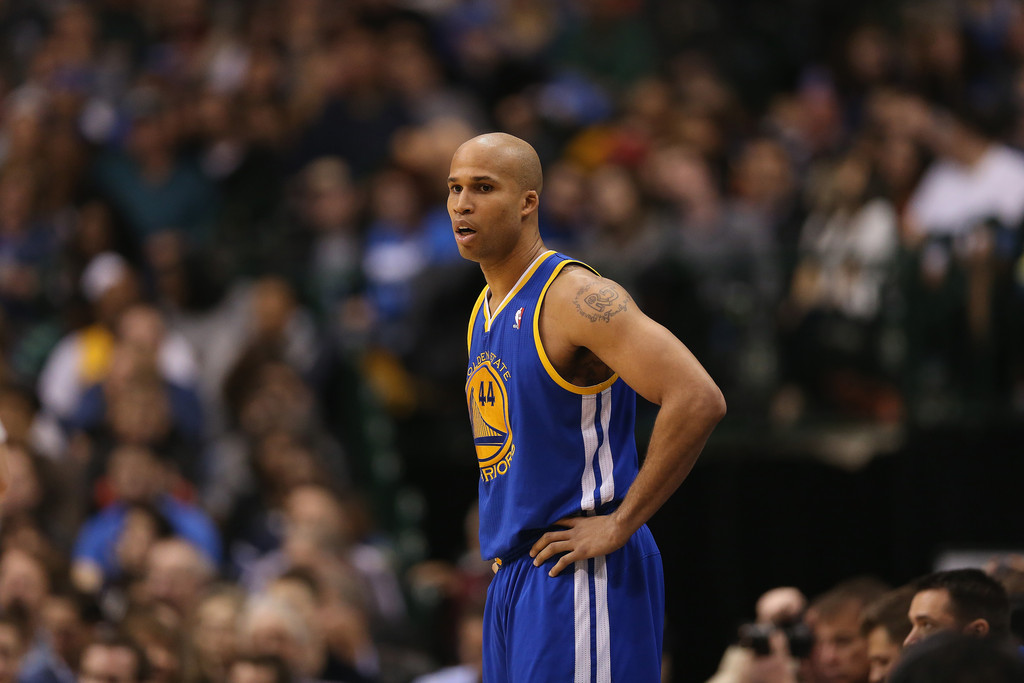 EDITOR'S NOTE: The following is a fictional tale. It marks the return of "John", Alex Dewey's alternate reality San Antonio ballboy. This story is set after the recent Golden State win over San Antonio's backups.

I was wandering the halls aimlessly when Richard Jefferson stopped me in the halls to explain something. "John, here's a doozy."

"What is it, RJ? I'm busy," I said. I wasn't even being sincere, I was just being a jerk so he'd hurry up. RJ had a tendency to could go on interminably. Without my terse influence checking him at every turn, that is. "Hurry up, RJ!"

"Frig, okay, so one time they got together this panel of Hall of Famers and league observers to choose the 50 best players of all time."

I had heard of this. "Yep. 50 greatest players of the last 50 years? Yeah, I know all about that. James Worthy was there, but I think someone got snubbed, right? Something like that."

"Of all time? What? You? Richard Jefferson? The man who would forget the ball if it weren't attached by years of tireless practice not to screw up on a basic level? The man with a tattoo of his initials in cartoonish block letters inside a circle? That absurdity of a man, that living anathema to greatness and grace? You? Richard Jefferson? The fortieth best of all time?" I thought of every insult I could that was technically literally accurate.

"Yeah, the very same Richard Jefferson as you see standing before you. I was ranked #40."

"But... how could that have happened? Was there an announcement?"

"Get this, there was a single press statement from the NBA on the Internet. I remember seeing it and getting a few supportive e-mails, like, within minutes."

"WHAT?" I was in utter disbelief. Richard Jefferson had never won a championship; instead his team tended towards likable underdogs that overachieved and never got remotely close to an upset when push came to shove in the trial against the true best team in the league. Tim Duncan, Shane Battier, Manu Ginobili, Chauncey Billups, and Dwyane Wade: These are among the so-called alpha dogs that have knocked off RJ from the playoffs, stymieing his championship ambitions. If you can even call RJ's drifting, always-waning existence any way ambitious. It's a possibility that Richard Jefferson was never even the 40th best player in a singleseason. He'd never earned -- and had scarcely deserved -- even a single All-Star berth.

He was just on a lot of good teams and had apparently made some serious league observers think he was the Nets' proverbial ace in the hole for several years. Sure, he'd had some impressive playoff performances, but I just laughed. I'd seen RJ bumble passes that a child could convert into an easy 2. An inspiring high-flying athlete in his peak (he'd once jumped a file cabinet in the Warriors' front office, just to show he could), Jefferson lacked the feel for the game at the highest levels that tends to weed out such gimmicky high-flyers. But being both athletic enough and fastidious enough to not only keep his job but thrive, Jefferson had still commanded a lot of respect from the people outside the league. An ultimate ambassador, as he was.

"They'd actually singled me out because I was an active player. I still remember it... 'Richard Jefferson of the Milwaukee Bucks, #24, from Arizona.' No. 40 all-time! The press release said they'd be honored with a plaque commemorating their accomplishments. I for one was shocked." Such did Richard reveal his best quality -- his earnest honesty and relentless reasonableness about the whole thing, seasoned with a nice dose of almost pathological humility. He seemed to re-enact his shock with his eyebrows as he told me all of this. "I absolutely did not know what to make of this information."

"I'm seriously doubting this ever happened. Did you dream it? Did you take too much cough medicine the night before, RJ?" I said mockingly. There was a slight hitch in my voice, not unlike Jefferson's characteristic hitch in his shot that had completely destroyed his game in his old age.

"No, I swear this really happened," Richard said sincerely.

"I believe you BELIEVE this really happened, Richard. I just don't know what to make of the possibility that it actually happened. It seems rather absurd on its face."

"Aww, here it goes. OK. Look, the press release calling me #40 was taken down after just twenty minutes up, probably for someone to realize they'd miscalculated a tally or something, I figured," and then he said with confusion, "But they never brought it up again, like it never even happened, that's what was so weird."

"Yeah, that must be a weird thing for you to think happened, but that probably didn't." I said, fully hamming up my doubtful perspective.

"Shut up, John," and I was taken aback by this, "Seriously, shut up, I'm telling a story."

I thought about throwing in a u mad bro, so characteristic of my youthful scorn for any sort of sincere passion, but thought better of it. Richard seemed almost distraught about this omission. "I just wanted to know who was actually there, even if it wasn't me. I'm fine not winning them all, but I feel like I had something taken from me, you know, and I wanted so badly to get it back. I don't have the nice e-mails they sent and I don't have a record of the list, and the NBA never officially acknowledged it. John," he said, "They washed their hands of the one truly supportive gesture of the historical legacy of Richard Jefferson, however absurd you may think him. They washed their hands utterly."

"Damn. Yeah, okay, I can see that," I said with not a little diplomacy in my tone, trying to imagine how Tim Duncan would comfort a teammate that had just missed a game-winner. "So, did you ever find out what happened?"

"Yes, just last week I was visiting the Walton home in San Diego. You must know Luke Walton, we went to Arizona together, and Bill Walton, the legendary center."

"Yeah, I mean, we just played the Cavs a few weeks ago, he was there. And I've seen Bill courtside every once in awhile. He can barely walk."

"That's right, he can barely walk," and Richard was suppressing a smile to get to talk about Bill Walton. "But he loves the game of basketball, John. And he loves his children, and I've always been able to go and talk to him when I've needed to. Yeah, he can barely walk. But he's a very interesting person, to say the least. If you asked him the greatest player of all time on any given day he'd tell you someone different. Some days it would be like Cedric Ceballos, other days it would be Manu Ginobili. Not even kidding. And... for one blessed day, Bill Walton woke up... apparently after I'd made a visit to his family, and he wrote down "Richard Jefferson" and "Luke Walton" as his favorite players of all time. Bill was also one of the people involved in the tallying of the ballots (for reasons passing understanding), and what he told me is that no one had chosen Luke Walton on their lists, but that a couple college observers had remembered my run with Arizona and given me a 50 spot or something. And the way the points were tallied, that was just enough for me to slip into 40th place. _ He told me this all while sipping a gigantic iced tea and lemonade, John._"

"Truthfully," Richard said, "I feel like he could have been telling the complete truth, an utter fabrication, or something far in between. It's not a stretch to give me #50."

"Yes it is," I interjected quickly.

"Damn. Frig. Okay, I mean, yes, it is. But it's not a stretch that someone that watched me in college and sees me in the playoffs my first 5 years and the Olympic team and overrates me in the pros and puts me #50, no?"

"But yeah, I figure a few guys legitimately give me #50, even #45, and, well, Bill Walton and a couple of his buddies in the Hall get together and say 'Hey, let's put RJ in this thing, he's a nice young man! George Mikan won't mind. Bernard King won't mind.' And they put me at 20 or something, and suddenly they're dealing with a few players like me and a few others that are getting these nostalgic votes that aren't really fair, and so they count up the ballots and decide that they really don't want to honor all the players that got voted in, but they don't want to fudge the vote by getting a legit candidate out of there. So they figure, hey, most of the players that deserve it have already been honored, and the rest probably don't deserve it that much."

"Ah. So they considered scrapping it entirely."

"Yeah, they did. They went ahead with the press release, otherwise I wouldn't have any clue that this had happened, but they went forward with that doubt hanging over it, is what it sounds like from Bill. Again, I'm not sure how far to trust his tale, he once told me eggs were filled with rainbows if you open them at the perfect full moon and put them in front of a telescope and you could eat the rainbow and it would taste like Skittles."

"But I mean, his story about this vote seems pretty legit, no? Sounds like a lot of marketing campaigns that never took."

"My understanding is that they scrapped it as soon as they got the first returns from Stern saying that it was a travesty that I was placed at #40 and that 'he didn't care how much publicity it would cause, it's an embarrassment to lists. Take it down, never mention it again.'"

"I still hold out hope that when Stern is gone they'll put it out there."

"They probably never will, John, but at least it's a mystery resolved. I can rest easy."

Richard Jefferson, in addition to having an absurd bald head and a bad record in the clutch, apparently had the gift of resting easy. Because I found that I couldn't sleep for the nights following RJ's revalation, furtively tossing and turning in a cold sweat. I thought of all the shams of history that had ever been raised even a shade above mediocrity by a whimsical eccentric peddling nepotism in all his advocacy that the figure in question had happened to visit the day before, or something similarly arbitrary.

I shuddered at these shams that in a hundred years children would be taught to idolize or even emulate in habit, thought, and pattern... for I myself was once a child, brought up in this way! And worst, I thought of the pain - if the soul be immortal - to be one of those shams watching from the afterlife, to know that in a hundred years your poverty of ambition would be falsely rewarded. I shiver.

In the week since that day, I have fretted and bungled my deadlines and obligations in a sort of tragic irony that the Greeks would have relished, thinking of myself remembered falsely as the 40th greatest mop virtuoso of all time. I mop now with a hitch, perhaps for evermore.

Richard smiles as he passes.