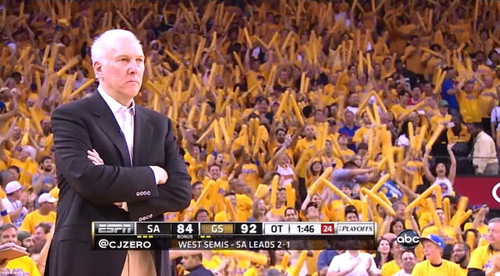 The NBA playoffs can be a harsh mistress -- you get a lot of intense games, but you also get a lot of heartbreakers. You know the type. Those deflating games where a team is, retrospectively, on the absolute verge of victory. A high-leverage game that could've gone either way. The winning team gets to experience the rushing elation of a minor theft -- the losing team takes a bitter pill. This year's playoffs have an air of inevitability around them, and that's cast a minor pall on the proceedings. And that's a bit of a shame, because we're having a remarkably close and snippy season. Heartbreaking loss after heartbreaking loss -- gutty win after gutty win. All over the place! Gut punches abound.

All that said, there's a tendency for analysts and bloggers to take on vacuous airs when the subject of a heartbreaker loss comes to play. "This team has no chance of winning the series," they say -- "how could they, after a gut punch like that?" Smart analysts galore cast aspersions to the mental toughness of the team and conflate heightened probabilities with statistical certainty. So, on the inadvertent request of Dr. Jeremy Abramson, I decided to take a bit of time to clear a few things up. For today's playoff question, I'm examining a subject near and dear to the hearts of NBA fans everywhere -- how does a heartbreaker loss affect a series, really?

DEFINING A HEARTBREAKER, and THE THREE BIG QUESTIONS

This was a bit tough, but I think I finally came to a reasonable conclusion. For my definition of a heartbreaker loss, I'm going with a road game lost by 1-2 points in regulation or any game lost in overtime. The logic here is simple. If the game was lost by 1-2 points in regulation, one single shot -- a three pointer -- could've won them the game. A single additional shot. They were on the road, which means they were a single shot from silencing a hostile crowd. If the game went into overtime, the same is true -- one more shot, one more free throw, one more anything and the game was theirs.

The logic behind excluding three point contests is simple. In a three point game, the best you could reasonably do with a single shot is force overtime. And if you played regulation evenly, overtime is more than likely going to be a 50-50 coin flip either way -- hard to really call that a heartbreaker so much as a bad break. So there you have it. It's a 1-2 point margin or an overtime game. For my data, I used information from Basketball Reference (where else?) and compiled a score of information by hand for all heartbreaker losses from 1993 to 2013. It was something of a massive slog, but I'll share my final dataset with anyone who asks -- let me know if you'd like to look at it.

Not as common as you might think, actually. They've been exceedingly prevalent over the past two years, but that's something of a statistical outlier -- this is the first two year period with more than 20 playoff heartbreakers in the last 20 years. Here's a graph to illustrate the point.

The red bar indicates this year, when we (clearly) have a strong chance at accruing a few more of these types of games before the playoffs conclude. In general, heartbreakers are relatively rare events. They don't happen particularly often, and when they do happen, they tend to have a few games clumped together into a relatively small group of hard-fought series -- for instance, this year's 10 heartbreakers are clumped into seven of the series we've played out so far. In 2006, five of the 14 heartbreakers were concentrated in two of that year's most contested series -- DAL/MIA and DAL/SAS. Et cetera, et cetera.

No! Not at all, actually. There's a relatively persistent trope that's been running around for a while that a team can't possibly come back from a road heartbreaker. Especially if they're the road team in the series -- if they lack home court advantage, they couldn't possibly win a series where they let a game get away on the road, right? Sort of, but not quite. Here are the raw series win/loss numbers when a team suffers a playoff heartbreaker.

TEAMS THAT HAVE HOME COURT ADVANTAGE: If the team with home court advantage suffers a road heartbreaker, it's hardly much of an ill omen for their chances at all. In the 20 year period surveyed, homecourt teams that suffered road heartbreakers went 37-22 in the series they suffered the heartbreaker in. That's a reasonably good winning percentage (63%), but it's not 100% robust -- for instance, in five cases, the heartbreaker actually ended up being the deciding lever in a series where the homecourt-blessed team outscored the visitors handily over every other game of the series.

TEAMS THAT DON'T HAVE HOME COURT ADVANTAGE: If the team without home court advantage suffers a road heartbreaker, their chances are certainly slimmer... but they definitely aren't extinguished. It's not a death knell, even if things look rough. Teams that start the series on the road are 18-53 in series where they suffer a road heartbreaker, a 25% winning percentage. There's certainly some truth to the idea that a HCA-lacking team that loses a road heartbreaker has missed their best chance at winning the series. But there's also truth to the idea that the road heartbreaker tells more about how evenly matched the series is than it does about the team's chances to win the series. In four of those series losses, the heartbroken team actually managed to outscore the homecourt team over the other non-heartbreak games of the series.

Overall, teams that suffer heartbreakers are 55-75 in their heartbreaker series over the 20 year span examined.

This was an interesting sub-question I had when I finally got my data together. Out of all these series, how often did the heartbreak loss represent the deciding game of the series? That is to say -- how often would a flip in the heartbreaker have flipped the results of the series? The number was a bit surprising, at least to me. In 24 out of the 130 cases in this dataset, the heartbreaker game represented a game that could've flipped the series. That is to say that the entire series could've been flipped with just a single additional shot or -- in many cases -- a single free throw. Of course, once you looked at the point differential, one starts to wonder why the number wasn't higher. Even though teams that suffer heartbreaker losses were 55-75 in the heartbreaker series, they posted a positive point differential (0.35 PPG) among their series when taken as a whole. That's extremely, extremely close. Closer than I'd expect, especially looking at the numbers regarding road team series losses and the scant number of teams who lost the series but won the point differential outside of that game. To summarize the contents of the last few paragraphs, a short table:

Series Win and Series Loss are pretty self-explanatory. "Flip" implies that the series would've flipped if they'd won their heartbreaker. DIFF/GM gives the point differential for the team, and CHAMP indicates whether the team with the heartbreaker loss won that year's championship. That's right -- 10 of the games in this dataset involved teams that would-be champions losing a road heartbreaker during their run. That's eight of the last twenty champions, listed below:

Overall, the presiding narrative -- the idea that a road heartbreaker is an omen of utter doom -- isn't exactly right. Close, but not quite there. Road teams posting a 25% winning percentage in the aftermath of a road heartbreaker is hardly as bad as it looks on its face, given that you're talking about lesser teams who are essentially giving their opponents a one game handicap. The fact that it's that high is more a testament to what the heartbreaker means to the road-starting team on a macro level -- it means that the gap between the two is hardly insurmountable, and whether the series is long or not, they have a chance to push them. As you can see with this year's mercurial Warriors squad.

And the heartbreaker isn't just suffered by the downtrodden -- eight of the last twenty champions suffered one such heartbreaker loss on their march to the title. Will that continue this year? Certainly possible -- five of the remaining eight playoff teams (Golden State, San Antonio, Memphis, Oklahoma City, and New York) have already suffered heartbreakers, and there are still ample games remaining for the final three holdouts (Miami, Chicago, and Indiana) to join the party. We'll see. If you have any questions regarding this analysis, feel free to comment on this post -- I'll be responding to comments for most of the day.