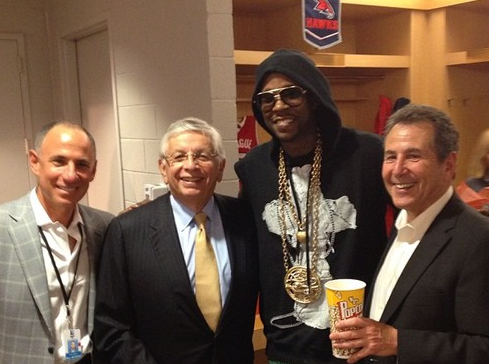 David Stern reclines in his cavernous underground office. Bats fly from wall to wall. He is waiting.

STERN: [picks up phone] Hello? ... Yes, yes. Thank you. ... Yes, I'm sure. I do want Mauer and Foster on the call. ... Yes, they have their orders. Yes, I know what this means. ... Oh, really now? [Stern pauses, unfurling a Grinch-like grin] You can send him down, if you'd like. Perhaps he'd like to hear it directly from me. Appreciate it, Maurice.

Stern hangs up his work phone. He leans back in his chair and plays Candy Crush Saga on his iPad. He has bought every power-up. It was a business expense. About half an hour later, Adam Silver walks into the room. He stands over Stern's desk, hands on his hips, seething. Stern makes no indication of noticing his presence.

STERN: Sit down, Adam. What took you so long?

SILVER: It takes twenty minutes at a minimum to get down here from the deputy commissioner's office. You know that, David. Nobody knows why you built this. ... Or how you built it, actually.

STERN: Oh, don't be a spoilsport. It'll be your office soon enough. What do you want?

SILVER: Look, David. Stop playing games with me! WHY AREN'T YOU GIVING ME MIAMI?!

SILVER: And if you don't stop that friggin' grin I will end you I swear to God.

The two wizened men saunter across the expanse of Stern's ludicrously huge underground cavern. There are various trophies in glass cases to their side. They pass by the game ball from LeBron's last game in Cleveland. A framed copy of the stat sheet from DAL/MIA, 2006, G5. A signed photograph of Yao Ming shaking Stern's hand on draft night. A life sized Muggsy Bogues wax figurine. An enormous mound of Michael Jordan's gambling chips. A newspaper commemorating Boston's 16 titles. An orange.

Silver looked up and down. It was a newspaper commemorating the 1983 sweep, Sixers over Lakers.

SILVER: I fail to see the problem. You had the Lakers. You had Magic. You had Moses. HUGE ratings. Second best ever to that point, right?

STERN: Adversity comes in many shapes, Adam. In 1984 we put together a new CBA. We added a salary cap. We added drug testing. We added all sorts of things to bring the league back to par. We needed to bring our viewers home. We needed to expand. And me? I added a little something else. Something on the backend. A small note in the margins. Do you see it, Adam? Look closely.

STERN: Look. The NBA had a lot of problems when I took the reins. Our players were using, their effort level was pathetic, and our marketing was bunk. But the 1983 finals typified one of our biggest problems. We didn't manage the games. Sure, we don't flip games. But we need to at least massage them a bit. In 1983? Nothing. NOTHING. The Sixers shot a billion more free throws and the Lakers never had a shot at taking any of the game. At least in 2007's sweep the ratings blew. In 1983, the ratings were great. They were phenomenal. We NEEDED those extra games. We NEEDED that extra leverage in our TV deals. Where was O'Brien? He was asleep at the wheel. And I took over.

SILVER: So what did you do?

STERN: I pushed it. Have you been following the Obama administration? Have you been keeping track of his Department of Justice, and the slow drip as the public realizes he's approved more extrajudicial power than Bush did for his DOJ? Have you watched as he's leveraged every little power his predecessor left behind, and strengthened them at every turn?

STERN: That's what you've got. After the 1983 finals, we greased the wheel. We guaranteed the TV folks that we'd keep our finals competitive. No more sweeps. Six game minimum, except in extraordinary cases. We figured out ways we could shift the odds towards the underdogs when we needed to. I don't care who wins. Nobody cares who wins. They just care about two things. Who's playing, and how close is it? How many games do we get? How many ads can we show? In the 80s, we had the who. We had the how. We developed that. We fixed it. And the league took off like a freakin' ROCKETSHIP, Adam. The league took off. It exploded. The NBA always had the tools it needed, O'Brien just wasn't man enough to use them. He believed in the integrity of the game. I believe in it too, mind you, but the almighty dollar has to have some consideration. Has to be some wiggle-waggle room. You know the score. You've been here before.

SILVER: Alright, cool. So why in God's name are you using that to keep me from getting Miami?

STERN: Because Larry O'Brien wasn't an idiot, and neither am I. The board of governors don't know if you're their man yet. They don't know if you've got those teeth, Mack. O'Brien could've extended the 1984 finals a bit, given me some extra wiggle room. He didn't. He wanted to see how I responded. For better or for worse, I went the other way and I increased the league's profits while casting doubt into the machinations that ran it. I could've said "it's a sport, it happens." I made promises instead, and I manufactured the power I needed to keep them. I'll give you a great Finals. Maybe Peter's team takes it. Maybe Herb's team takes it. Should be fun basketball. For people who like defense.

SILVER: So, like, ten people in the United States.

STERN: Hah! Funny man. But that's your job. I made my decision regarding series length -- I skewed to the game to draw out our final salvo. Get us more ad time. Keep our T.V. deals humming. Now, though? I've left you in a bind, Adam, regarding the markets that play in our finals. And you, like me, need to figure out how the hell you're going to get through it. I'm sentimental to the small markets, personally. And I think the NBA gains more than people think when teams like San Antonio make the finals and contend for years on end.

STERN: There are two ways you make money. You can either draw a lot of people all over the United States... or you dominate individual markets and completely bleed them dry. Both can work, if you do it right. In small markets with only one professional sports team, like San Antonio, you destroy the ratings. Even as the national ratings were so-so for Memphis vs San Antonio, that series completely destroyed everything else in the San Antonio market. Virtually everyone who had a screen was watching. The city was tuned to every layup, every free throw, every defensive switch. In a larger market, you don't get that kind of bleed-through. You get a good concentration. But you don't obliterate the market. You still get your Dodger fans, your Red Sox fans, your Yankee fans who can't bear to turn off the baseball. You get your football guys who are so tuned in to their football team they don't give a damn about any other sport. Your pressure to watch is less localized.

SILVER: So you get larger ad revenue when you can dominate a market?

STERN: Hah! No. Not larger. But you can still make a lot of money that way, and the difference between a small-market team and a large-market team becomes marginal. You just need to be able to negotiate it right and advertise it correctly. That was O'Brien's lesson, when he left me with that annoying sweep. He wasn't trying to tell me that he was a moron -- he was giving me a difficult argument but giving me the tools to make it. Yes, sweeps aren't great for advertising revenue. But they aren't the end of the world for the broader league. You just need to advertise your historically dominant teams. You need to manufacture publicity around the long win streaks, the incredible intensity, et cetera. You need to ham up the "seventeen titles" angle with the Boston Celtics, even if ten of the titles were skeevy as all get out. You need to learn how to advertise your product.

SILVER: But you didn't.

STERN: No, I didn't. You can take the easy way out and manipulate it. Which I did. It's difficult to give back the power once you've taken hold of it, Adam. Look at the DoJ. Look at Soviet Russia. Look at me. But, that's your choice. O'Brien gave me a choice, and that idiot was smarter than he looked. So, yeah, Adam. I'll leave you Indiana. Pacers vs Spurs! Only on ABC! All the glitz and glamour of a melting glacier. And you'll spend the summer sweating these T.V. negotiations, trying to make the honest argument. Or you'll go into those meetings with your head held high, and four little words that'll grease the wheel and guarantee that NBA money.

STERN: I'm one of them. Now get back to work, baldie. I've got money to count. 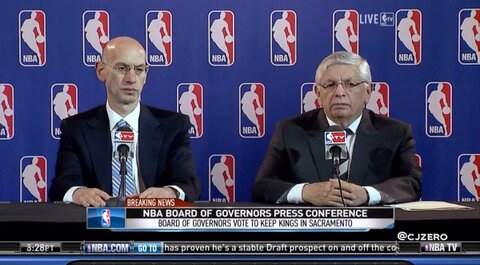