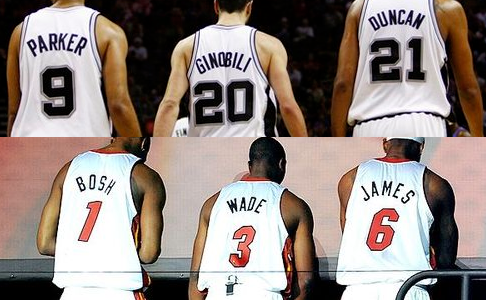 Ten years ago we had no LeBron, Tony, or Timothy in the Finals.

Now, we have Tim Duncan, Tony Parker, and LeBron James in the Finals. Bienvenidos a Miami -- 2013 estilo.

It's more likely that the Heat sweep the Spurs than that the Spurs sweep the Heat. In such a sense, the Heat are favored. But we've all heard by now a hundred factors arguing for one or the other team, and our collective predictions as writers have been woeful. Let's do something different. Without copping out of making a prediction (which I'll make tomorrow), I'd like to talk about why this series is actually interesting to me -- both as an observer and student of the game, and as a passionate fan that has seen 250 Spurs games or so in the last 4 years and written essays about how Tim Duncan is Prince Andrei and RJ is Pierre.

LeBron James is a chameleon, a physical and mental prodigy that combines in the psychophysical to form the perfect athlete, one with the psychology of a true team player that learns better every day how to assert himself and how to defer to teammates... and how to do both simultaneously. Behold the actualized man, behold the man who can do everything on a basketball court at will with the exception of literally ending the game for a win condition, and, even then, he's not far off. Behold LeBron. And finally, at length, he is a champion trawling the present for a validation. LeBron is as liquid as a great player can be without also disappearing into the container of the game, and yet he's as potent a pick-your-poison as any great apothecary's ever dreamt up. Then you have one of the most athletic and savvy players to ever play the game in Wade, and theoretically a giant cast of players that can step up, of which exactly one or two seem to at any given time.

And who will he be facing but the San Antonio Spurs? Themselves a talented outfit, San Antonio's calling card is consistency, organizational stability, execution, and maximizing skillsets of often limited players. San Antonio's individual players step up, take the light they receive, and shine it instantly on their teammates. Tony Parker is their best player right now, but Tim Duncan is yet still a wise, physical presence at the rim. He's one of the half-dozen best defenders in the league without hesitation, and if you get me really drunk, I'll tell you he's the best. And that liquored up Dewey could make a pretty good case for it, I venture. Kawhi still has this odd orbit around Duncan on offense, and he and Danny Green have this confusing chemistry on both ends that's odd to behold. As the playoffs have shown, the Spurs are not quite so deep anymore; there's not a lead on this Earth vast enough that the Spurs could not lose, if Duncan's out of the picture. Manu Ginobili is a gigantic blaring unknown. What we know fits on a USB-thimble -- what we don't could span the milky way.

The common thread is fluidity. Both teams have played radically different styles over their principals' last six years -- even the Spurs and their vaunted consistency have seen six completely different teams the last six years. Their common thread being "A little fallen off defensively, but dynamite offensively" and, if you weren't watching too hard, you'd assume it was a bunch of boring drives and kicks to the corner, more or less based on injuries. But that's only against the Bobcats and Kings; against teams with competent interior D and solid rotations (such as Memphis, since those are the first two things to say about the Grizz), the Spurs have shown they can make the next-level pass in response to the best rotation in the world... and then another... and then another... and then another. Their players are not just unselfish ideals but are individually creatives, only the Big Three aspiring to creative genius but Kawhi showing flashes and Danny Green and Tiago and Diaw showing their next-level vision and awareness despite sometimes inconsistent execution.

The Spurs and Heat cover more ground on both ends than most teams can aspire to on their best end. And when pressed, both teams are explosive, maximize their transitions, and can go to the rim seemingly at will against the best defenses on the slightest mistake. Some of their defense has ground life out of the eternal, wearing out tiny Stephen Curry's brittle ankles or big Zach Randolph's brutalizing post play. Joakim Noah's brilliance and George Hill's waterbug talents. On the whole, these are two teams possessed of fluidity and the mental and physical dispositions to take advantage of that fluidity. These teams are the Man for All Seasons, unafraid of the executioner behind the door. These teams are like water, and that water can flow, or it can crash.