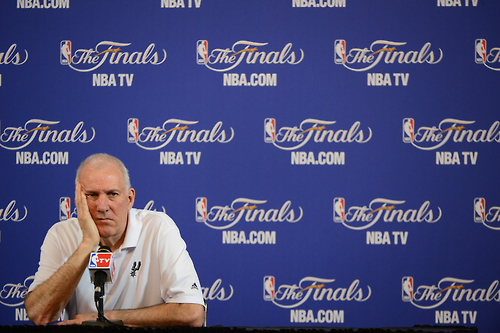 Hey, all. Aaron here. As most know, I am a San Antonio Spurs fan. Thus, I have a certain vested interest in these Finals, and a certain degree of faith in my heart that the Spurs can win it all. On the other hand, I am an NBA fan who watches untold hours of tape and tends to clinically divorce my heart from predictions, and I know how ridiculously good the Miami Heat are. I'm a statistician, after all -- Bayesian or not, I pride myself in my ability to separate my deeply-felt emotions from my handicapping and expectation-setting. Except, you know. Now. Spurs in the NBA finals? Against the dude that rocked Cleveland and infuriated an entire side of my family? Okay. Come on. There's no way I can keep that emotion out of my handicap. But I can keep it controlled. And thus, the series you see before you was born: Head vs Heart, a knock-down drag-out brawl between Aaron McGuire's better judgment and his undying faith in his favorite team. Game, set, match. Today? Let's take account of where we're at.

HEAD: Alright, so I think we can agree with where we're at after two games in Miami. The Heat won game two by about twenty billion points and the Spurs were a single errant possession from giving Miami the lead in Game #1 and being down 2-0. The series is tied, but it isn't exactly the kind of tie San Antonio wanted. Fair?

HEART: No, that's not fair at all!

HEART: No, really, it's not. Sure, the margin was close in Game #1, but that underrates the extent to which San Antonio controlled that game. They won by four points and missed -- by my count -- seven or eight WIDE open threes. Although the shots weren't falling, the Spurs got just about everything they wanted on offense in Game #1 and completely set the tone defensively. Yeah, Miami had a bad night from their big three, but that was by design. Kawhi Leonard did a great job at forcing LeBron to defer, Duncan bottled up Miami's at-rim game as expertly as Hibbert did, and Danny Green was a revelation. It was a phenomenal game from the Spurs and it took about a million missed open shots for that game to stay close.

HEAD: I think you're totally off-base. First off, although the Spurs missed some open shots, the Heat did the same -- you can hardly say the first game was a blowout victory gone wrong for the Spurs without acknowledging that the Heat didn't get the same kind of calls they're usually accustomed to. Nor did they make all their open shots. And that second game in large part re-contextualizes San Antonio's offensive struggles in Game #1 -- they really DIDN'T have a great offensive game despite the scant four turnovers, in large part because they shot like crap and couldn't get to the line. And the same thing happened in game two. If that continues all series, it's curtains for the good guys.

HEART: Well, I suppose we can agree on this much -- if one of these two teams continues to be utterly unable to convert open shots and 100% unable to get to the free throw line, that particular team isn't going to win the series. Fair?

HEAD: Alright, you have me there.

HEART: Honestly, he's not playing THAT badly -- he played very well in game one and so-so in game two, but he hasn't had anything remotely approaching the kind of stinker he had in 2011 or 2007 yet. No, classic LeBron, but... the Spurs aren't letting him get open and he's contributing as well as he can outside of that. I can see him having a game or two where he just absolutely blows the world up, but I can also see this maintaining over the rest of the series. People tend to assume LeBron's 2011 disappointment was solely due to LeBron's own failings. This is incorrect -- Shawn Marion and the broader Dallas defense did an amazing job sticking to him and keeping him out of his comfort zone, and Kawhi Leonard is copying that playbook to a T. The soft traps, the shading, the elimination of his pet passing lanes -- the Spurs are playing like a team that scouted him perfectly, and it shows.

HEAD: By LeBron's standards, he's playing like crap. Hate to say it, but it's true. And there's no reason to think it sustains over the course of the series. This is a player who shot 56% from the floor this season. Heck, he shot 50% from the floor on a 2010 Cleveland Cavaliers team that was obscenely offensively dependent on LeBron's offense. There is no real basis to expect a series where LeBron shoots 42% from the floor and can't get to the line to save his life. LeBron will play better. And for that reason, I'm not feeling all that poorly about my "Heat in six" prediction. Might revise it up to Heat in seven, but I'm not sure.

HEART: Come now -- there's ample reason to think it sustains. Mostly just 2011, but that's a thing! The Mavericks turned the wheels and fed off LeBron's fatigue with a system specifically tailored to exhaust and muffle him. Popovich is using Carlisle's playbook, and the Spurs -- for all the "haha they're so old" talk -- are uniquely set to run a next-level version of that beautiful Mavericks team defense. They have the dominant at-rim Tyson Chandler type defensive talent in Duncan, the Shawn Marion wing defender with long arms and great instincts, a Kidd-type recovery guard defender and a coach in Gregg Popovich who excels in putting his pieces together. I'm not saying LeBron averages 42% for the series. But I don't think it's a stretch to think that he keeps having some trouble.

HEAD: It's not sustainable. Stop convincing yourself of that. In Game #1, LeBron played a phenomenal game -- he wasn't scoring incredibly well, but he commanded the floor and he missed some shots he normally hits. Over the rest of the series, smart money says he hits those shots and keeps muscling San Antonio on the boards.

HEART: Agree to disagree, I suppose.

HEART: I don't know, but I do know that he's giving me palpitations on defense.

HEAD: OK, I don't always have to be an enormous pessimist. There's a reason Neal's been playing. He can space the floor quite a bit better than Cory Joseph, and he has at least vestiges of ballhandling ability. In theory, Neal being on the court gives the Spurs added heft to their offensive sets by allowing Tony and Manu to cede ballhandling for short stretches to act as an off-ball threat and complicate the Heat's defensive schemes. Also: he's a good shooter.

HEART: That's nice and all, but he can't handle the ball. Or... okay, well, he CAN handle the ball, but seven times out of ten he shoots a jumper in the night. Seriously. It's so predictable. He just dribbles and isolates and takes a bad shot. He gets tunnel vision. All of these offensive sets are great in theory -- in practice, they're a waste of time if he isn't actually running them. And that defense...

HEART: You know how J.J. Barea knifed through the Heat's defense in 2011? Yeah. Gary Neal isn't that. At all. Except for the whole "oh, wait, he can't guard anyone" thing. People talk about how poorly Matt Bonner does on defense, and how teams can "take advantage" of Bonner off the dribble. Fair, but it totally overlooks the fact that Gary Neal is about 20x easier to take advantage of on defense. Pump fake. That's it. Or, alternatively, change directions. Not even sneakily -- at any point in your drive, just move in a different direction. He will spontaneously freeze up like a malfunctioning robot and throw up his hands. Also, if you drive past him, he ALWAYS seems to bring his arm up and weakly foul. You know how the Heat started their huge run in Game #2? They drove the ball at Neal every single time they got up the court. They got points on something like five straight possessions, because Neal can't play defense. And he's shooting 37% from the floor. That's not from three -- that's overall.

HEAD: Okay, yeah, I got nothing.

WHAT IS YOUR FAVORITE COCKTAIL?

ANSWER THE QUESTION THO.

HEAD: Uh... on a dime? Without time to consider? A gin and tonic, I guess. Fundamentally sound, somewhat classy, sorta boring. But it's dependable, light, and tasty.

THANKS, APPRECIATE IT. SO... GAME THREE PREDICTION?

HEAD: I'm going Miami. I don't like it, but... I'm going Miami. They figured a lot of things out in Game #2. And the Spurs are reeling a bit. They'll play a lot better at home than they did on Sunday, but they'll also have to contend with a better LeBron and a better Wade. It'll be close, and I won't be shocked if San Antonio wins it. But I'm going Miami.

HEART: I'm going San Antonio. Because, well... if they don't win, the whole complexion of the series changes. I have this weird feeling that the Spurs can't get behind in this series. Quietly, over much of the Spurs run, they've actually been pretty bad once they fall behind in a series. They need to maintain control of a series to stay on their top level. That loss in game two wasn't exactly akin to them losing control -- losing tonight would be. So if I expect them to win the series, and I think they've got a strong shot, I have to feel that they'll win tonight. So... I will. Go Spurs go, folks.